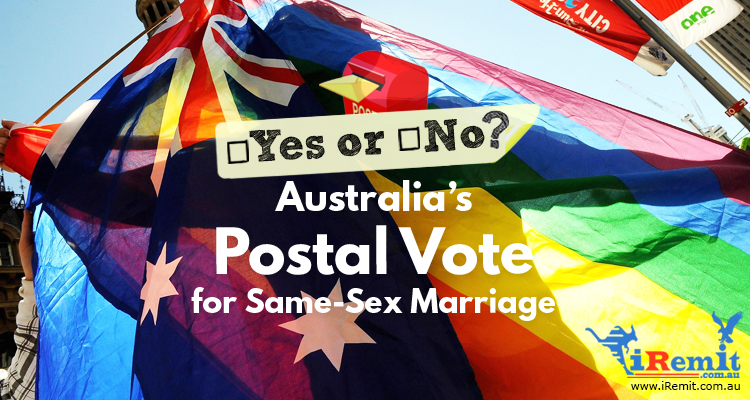 Yes or No? Australia’s Postal Vote for Same-Sex Marriage

The fight for gender equality in Australia is coming to its climax. The Australian Postal Vote for the legalization of same-sex marriage is due this November 7 at 6 pm.

If you have registered last August 24, you might have received a form by now. Just answer with a “Yes” or a “No” and send it to thru post with no cost. It’s that simple. You can check your enrollment here.

It is best to note that only Postal Votes collected physically on November 7 are included in the counting. With this, you should send the postal vote around Oct 25 – Oct 27 for a definite receipt. You can click here for the nearest post in your area.

If you are experiencing homelessness, leaving abroad, or living in remote & rural areas, you can still vote. Visit this link for the voting process.

Furthermore, you can write and draw on the ballot as long as the vote is legible. But, refrain from adding glitters or other items inside the return postal. The additional items will be destroyed and your vote might not be counted.

What will happen after the Postal Vote?

The results of the postal vote will be announced this November 15. The outcome is not legally binding.

If it’s not, why bother voting then?

To explain, the postal vote gauges public opinion and might open a parliament session in case of a “Yes”. The parliament will tally “free votes or conscience votes” of its members for the legalization of same-sex marriage. These are votes according to the members’ own personal conscience rather than the stand of their political party.

It is not certain that they will vote a “Yes” amidst the public consensus. But then, a lot of parliament members pledged to vote “Yes” upon session.

After knowing all of this, what should I vote for now?

Disclaimer: the following arguments for both have merits. The purpose of this section is to inform you of some of the arguments present for both.

Most arguments presented by those against same-sex marriage are biblical and biological in nature. They argue that God designed marriage for man and woman. And it should not be done outside our purpose of procreation. Same-sex couples can’t procreate and will not have the same dynamics as a family.

Some of the leaders of the Australian churches released their statement regarding this matter.

Also, there are already rights as a de facto relationship for same-sex couples. What’s the purpose of legalizing gay marriage?

Some also argue that with the premise of equality and “love is love”, this decision might lead to the legalization of polygamy, incest, or bestiality. With equality being the issue, what’s stopping you of denying these other relationships its legality?

Meanwhile, the pros argue that the issue is not biblical values but civil law.  They want to take out discrimination against the community.

Moreover, legalizing same-sex marriage invokes social acceptance; the same with interracial marriages, which was considered “filthy” back then. If a governing body legalizes the union, the public will know that its normal.

Furthermore, the definition of heterosexual couples’ marriage will not be threatened. Same-sex marriage is just an addition to the current legal term we have today.

The outcome of this movement is not for certain. Make sure to cast your vote to make a difference.

But for whatever you vote is, make sure that you still respect each other’s individuality. After all, love really conquers all.