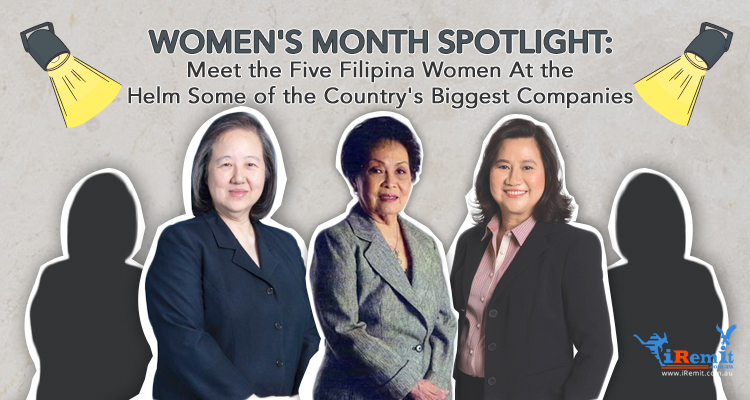 By Serena Estrella in Business and Career
March 23, 2018

Women’s Month Spotlight: Meet the 5 Filipina Women At the Helm Some of the Country’s Biggest Companies

If you actually read it, you might have noticed something: there was no female among the twelve Filipino tycoons who made it onto the said Forbes list.

I once read somewhere that it’s harder for women to become billionaires. The sheer amount of work and sacrifices required to become a member of the three-comma club is hard enough, but when you add in industry-wide sexism, as well as the endless obligations that come with being a wife and a mother (should a woman opt for that path), it becomes quite overwhelming.

However, that doesn’t mean it’s impossible. So, in honor of Women’s Month, here is a handful of Filipinas making some pretty big waves on the local business scene:

If you’ve ever bought from or even own a sari-sari store, you probably have this woman and her husband to thank.

Susan and Lucio Co serve as the vice chairman and chairman of Puregold Price Club, respectively. Together, they operate a network of 290 branches across a variety of formats, including Puregold, the grocery that sells inexpensive household goods in bulk, and S&R, one of the country’s premier warehouse shopping hubs. The company’s wide reach saw its revenues grow to PHP87.2 billion back in 2016, making it the biggest supermarket chain operator nationwide.

Fun fact: The husband and wife team are the only married couple ranked together on the Philippine Forbes list.

Fun fact: Mercedes Gotianun was the first Filipina to preside over a universal bank, having been the president of the Family Bank and Trust Co. for seven years.

Do you eat Lucky Me Pancit Canton? (Yum!) How about Skyflakes crackers? Nissin wafers?

If you said yes to any or all of the above, you’re probably one of Monde Nissin’s millions (billions?) of lifelong customers. The food manufacturing giant just happens to be behind some of the best-loved food staples in the Philippines. Heck, Lucky Me! Instant Noodles has been the most popular brand among consumers for over two consecutive years now.

And presiding over all of this is the company’s enigmatic president, Betty Ang.

Fun fact: Other than her name and that of her Indonesian husband’s, there is very little information available on Monde Nissin’s President. Her photo hardly ever appears in publications, and even her age is shrouded in secrecy. Talk about stealth wealth.

You know how this goes. Beatrice and Jose Campos were a married couple who established United Laboratories back in 1945. Seventy years later, Unilab, as the pharmaceutical company came to be known, is now the country’s 34th largest company, reporting revenues of over PHP41.9 billion.

Fun fact: Part of Beatrice Campos’ wealth is rooted in her family’s stake in another conglomerate: food and beverage manufacturer Del Monte Pacific.

In the Philippines, Mercury Drug is to drugstores as Colgate is to toothpaste. Vivian Que-Azcona is the current chairman of the Philippines’ largest drugstore chain, which reported record-high revenues of PHP123.2 billion last 2016.  With over 1,100 branches scattered throughout the archipelago, this proudly homegrown brand is a contender for having the most number of branches not just in the pharmaceutical industry, but also in the convenience store market.

Fun fact: Mercury Drug was founded by Que-Azcona’s father shortly after the end of World War II, when medicines were scarce in war-torn Manila.

Women might have been relegated to the sidelines and the shadows in the past, but while we’re still a long way to go from achieving true gender equality, there’s never been a better time to make our mark on the world. Brave, strong women have already paved the way for us to do things like running for public office, owning property, and getting a college education. It’s now our turn to the same for future generations to achieve even greater heights.