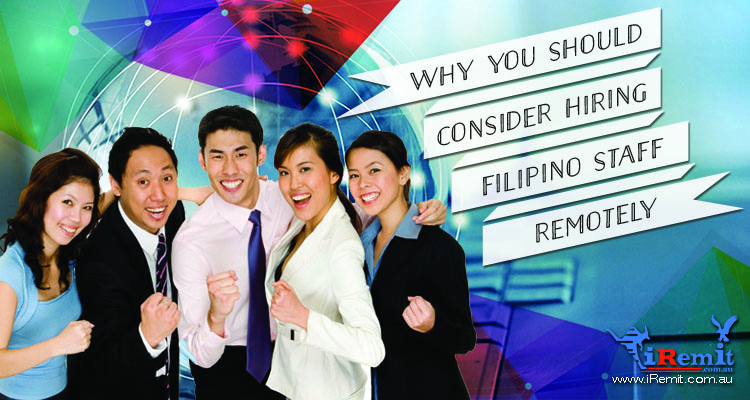 Why You Should Consider Hiring Filipino Staff Remotely

Are you a small to medium business owner who needs help in boosting productivity and increasing profit?

Employing Filipinos to work for you remotely might just be what you need.

Filipino workers are present almost anywhere around the world where work is available.

Outsourced jobs also thrive in different business districts in the Philippines and home based, outsourced work is slowly on the rise.

Authors of the book entitled “Towards a Knowledge-Based Economy: East Asia’s Changing Industrial Geography” say that foreign companies welcome workers from the Philippines because they are known to be an “educated, low-cost, English Speaking labour force.”

Different companies from overseas hire Filipino talent to “maintain legal records, deliver engineering designs and audio-visual content. US hospitals and health management organizations (HMO) outsource their transcriptions of medical records and settlement of insurance claims to the Philippines.” Other things that are entrusted to Filipinos are e-mail help centres, electronic publishing operation, finance and accounting.

Of course, Filipinos perform in other voice and non-voice accounts in the BPO industry handling a variety of accounts.

In one overseas recruitment site, they believe that the combination of skills and the Filipinos natural ability to adapt makes them the movers in today’s world.

What sets Filipinos apart from other nationalities?

Filipinos are often said to be good users of the English language that they can not only converse but really communicate well.

In addition, unlike other speakers whose first language is not English, Filipinos usually have a neutral accent. Some also have a knack of speaking English with an accent required for their job – American, British or Aussie.

Many foreign companies looking for employees to work on or off shore seek to hire Filipinos because of the reputation of being highly educated and trainable.

This year, the Philippines have a recorded 95% literacy rate according to CIA World Factbook.

Australia’s Minister for Trade and Investment, Mr. Andrew Robb said, “Filipinos in Australia are viewed as hard working, practical, determined and highly personable (people).” He made this remark during a speaking engagement at the Peninsula Hotel in Makati, February of last year about the Filipino presence in Australia.

Foreign employers from other parts of the world agree that Filipinos are hard working people who are seldom absent, very reliable and productive at work.

The country is the gateway to cultures from the west and the east. Its strategic location is one of the reasons why the country was occupied by Spain, the US and Japan. It is also frequented by other Asian countries like China for barter and sale of different merchandise since ancient times.

The country’s past experiences created an interesting culture due to the mix of both eastern and western influences. This makes it easier for Filipinos to adapt to different cultures wherever their visas (or online jobs) lead them.

In addition, most Filipinos are tolerant of other cultures and religions and they know how to observe these differences with respect.

These people are usually cheerful, agreeable and willing to work beyond what is expected of them.

This is why most foreign employers regard Filipinos as personable and easy to work with.

Moreover, they are driven by the desire to help their family. This drive makes them one of the most passionate and motivated workers around.

Thanks to the available technology, there are jobs that do you can offer to Filipinos online and it is easier and faster to facilitate hiring and paying staff from overseas as well.

You can subcontract your job through different outsourcing companies in the country or through companies sourcing home based or freelance talents.

Paying staff is also easy. The Philippines is one of the many countries whose economy thrives through flowing remittance from overseas workers to their families. You could easily pay your staff through bank or a trusted remittance company.

When it comes to increasing productivity and profit for your business you have to be smart – explore your options, experience quality work and employ the best.