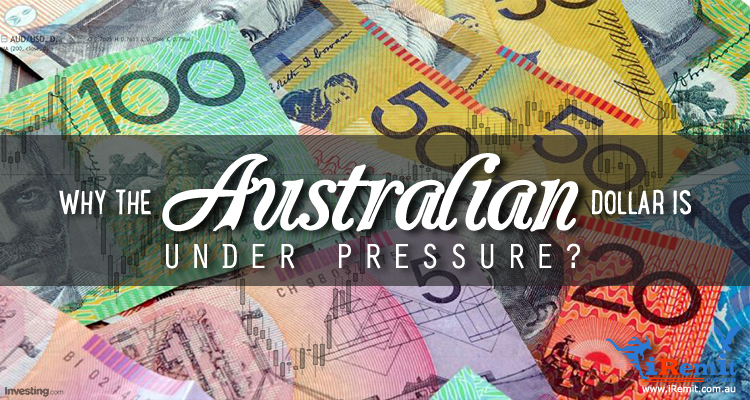 Why the Australian Dollar Is Under Pressure

If the recent downward movement of the Australian dollar has you worried, you’re not alone.

After a high of USD 0.7750: AUD 1 last March 21 (about PHP 38.64), the Australian exchange rate has fallen by about 3-4% in the past two months. It’s pretty much the lowest it’s gotten this year, and the jury’s still out on whether it will remain such or whether the AUD will fall further. (Yikes, please no. We here on iRemit would like to keep our jobs, thanks very much.)

This week, the Australian dollar appeared to be on trend as it opened under pressure due to several factors:

1. The Fed’s positive comments on the job market.

This has been causing trouble for the Australian currency since earlier this month. Analysts have attributed the decline of the AUD partly due to expectations of a rate hike in June as a result of the improved job market.

Earlier this month, the price of iron ore fell by a sharp 6.5 percent. As this mineral is Australia’s top export earner, the decrease in its value worldwide also affected that of the country’s currency.

3. Polls tightening in anticipation of the UK elections.

Though she’s been largely unpopular, the Conservative Party’s Theresa May remains to be the frontrunner for the upcoming general election. Given her rigid pro-Brexit stance, most currency markets are spooked by the ramifications of her retaining the position of Prime Minister.

4. Reports of another missile test in North Korea.

There’s nothing like the threat of World War III to bring down the value of any currency, and North Korea’s carte blanche when it comes to firing off short-range missiles to advance their nuclear and missile program simply reinforces this. So far, UN sanctions have failed to resolve the growing threat from North Korea’s actions as it seems that they are determined to head off and “counter US aggression” in the area.

Speaking of threats to worldwide peace and unity, the German chancellor Angela Merkel was quoted saying “the times when [Europe] could completely count on others are over to a certain extent.” This has been construed as pertaining to certain global alliances as growing less secure, bringing in even more uncertainty to the landscape of international politics.

And uncertainty, as we all know, is hardly ever a good thing for most economies, Australia’s included.

A weaker Australian dollar isn’t just bad news for the natives. Many families in the Philippines continue to rely on remittances sent by relatives working Down Under, especially now that the start of the school year is upon us.

But since most of us have no control over the worldwide events that have been shaking up the said currency, the best we can do is to monitor the market, send off remittances once the rate becomes (relatively) optimal, and counsel our families to be even more careful in handling those hard-earned Australian greenbacks.