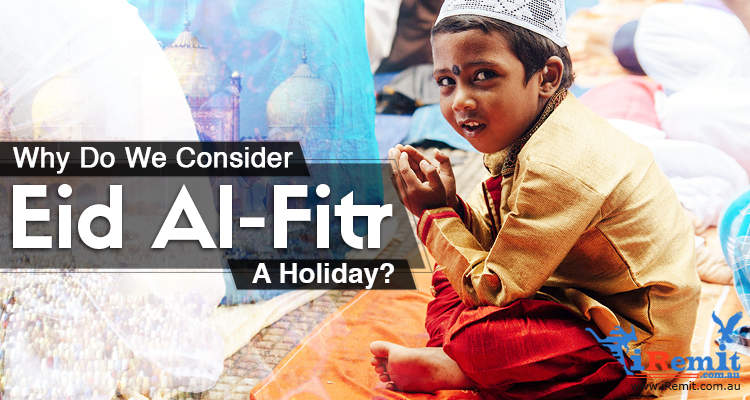 Why Do We Consider Eid Al-Fitr a Holiday?

Last May 26, 2017, Ramadan commenced celebrating the first revelation of the Quran by God (Allah) to the prophet Muhammad. Considered as one of the five pillars of Islam, this month-long celebration entails the Muslims to fast and pray. This is in commemoration of the prominent miracle Allah has unveiled.

Ramadan is honored by fasting (sawm) when the sun is up. Before the sun rises, Muslims start the day by praying the fajr and eating the “pre-dawn meal” (suhur) afterward. With the next meal allowed only after sunset, the devotee fasts throughout the day. Iftar, the evening meal, for the followers is served after breaking the fast into a call to prayer.

Intention of the Heart

An important state for the disciple is his/her niyyah or “intention of the heart” for the fast. The fast should be with the intention of worshipping Allah alone. In the eyes of the omniscient, by not achieving niyyah, the fast would not be considered fasting at all.

Assuming the achievement of niyyah, fasting allows the believer to be aligned with God and his/her spirituality. The absence of food exhibits cleansing from our worldly intentions and empathy to the poor and needy; ultimately, leading us to the true essence of Islam.

Eid al-Fitr or “festival of breaking fast” marks the end of this observance of Ramadan. It comes with festivities spanning three days in some countries. The festival highlights communal devotion, well wishing, and charity.

This is the first day of Shawwal of the Islamic Calendar. Muslims pray the Eid prayer in Mosques and give out sadaqah al-fitr, a compulsory charity to the poor. It is believed also that, if you continue to fast after this day for six days in Shawwal, the devotee will be rewarded by Allah commensurate to fasting for a year.

The camaraderie and brotherhood created by this tradition certainly solidify the Muslim population. With respect to cultural diversity, Eid Al Fitr is a cornerstone to Islamic believers. The impact it holds is certainly worthy enough of its worldwide holiday observance.