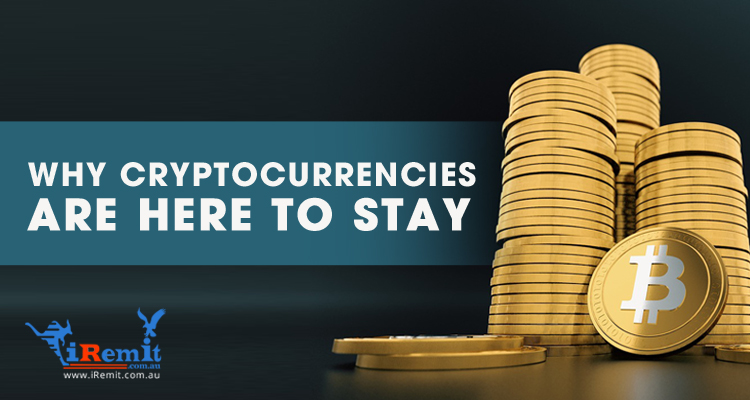 Why Cryptocurrencies Are Here to Stay

Trump is still President, the UK is still up in arms over Brexit, and the currencies of both countries are no longer as secure as they once were. With so much up in the air right now, it’s only natural that people are looking for something that’ll stick around.

Strangely enough, cryptocurrencies apparently qualify as such. Volatile as its valuation might be (heck, it’s more volatile than any global currency at the moment), that hasn’t deterred a lot of people from buying into it or at least attempting to learn how to.

Why is that? Let’s take a look a few angles :

To see just how far cryptocurrency has come, look no further than perhaps the world’s leading online retailer: Amazon.com. Not only has the e-commerce giant continuously proven itself as THE Internet marketplace for “everything from A to Z,” but it’s also been shaking up the retail industry by acquiring well-known outlets like Whole Foods and then using them as platforms for experimenting with groundbreaking shopping technology (e.g., a cashless grocery).

With its humongous customer base and access to cutting-edge technology, Jeff Bezos’ brainchild is poised to dictate revolutionary retailing trends. Guess which three domains the company has recently registered?

Yep, using bitcoin or something to pay for stuff now looks like a real possibility.

In Millennials We Trust

Love ‘em or hate ‘em, millennials can drive investment opportunity trends for decades now that they’ve quietly surpassed the baby boomers in population size. Having had to suffer the consequences (the early 2000’s dot com bubble burst and 2008’s global financial crisis) of the past generations’ greed and wrong decisions made many of us wary of traditional assets or of financial advisors advocating such.

On the flip side, as the first generation to come of age with computers, social media, smart phones, and start-up entrepreneurs, millennials are largely tech-centric and are thus more likely to root for financial instruments that are linked to advances in technology. With remote work steadily gaining traction and its millennial workforce becoming ever more reliant on their devices to carry out financial transactions, digital payments are steadily displacing older payment forms.

So, when majority of the population begin to embrace Bitcoin as the preferred method of payment, this would only solidify its position as the currency of the future.

The Need for a New Global Currency

I once came across an article about some Silicon Valley bigshot who proposed putting up his own floating country in the middle of some ocean. Apparently, he hoped to establish an independent state that wasn’t bound by traditional governments so that out-of-the-box visionaries could have a safe place to explore all sorts of possibilities.

It sounds like something out of a George Orwell novel, sure, but the need for decentralization is real. Think about how companies like Uber and AirBnB already defy regulation because the very quasi-ness of their existence simply makes them hard to pin down, or how you can potentially employ the best talent regardless of their geographical location and then pay them in whatever currency both parties agree on.

So, as the world gets smaller and as more borders get torn down, the need for a universal currency that is immune to the vagaries of international politics and the imminent threat of nuclear war will just be more pronounced.

Understanding the workings of blockchain technology and cryptocurrencies can be quite daunting, but in an ever-changing world, increasingly necessary. We clearly live in an age where technology is developing at an alarmingly speedy rate, disrupting life as we know it in all sorts of ways.

If it’s any consolation, I suppose the intricacies of Bitcoin and its ilk would still be easier to fathom than whatever goes on within the minds of the world’s politicians, eh?