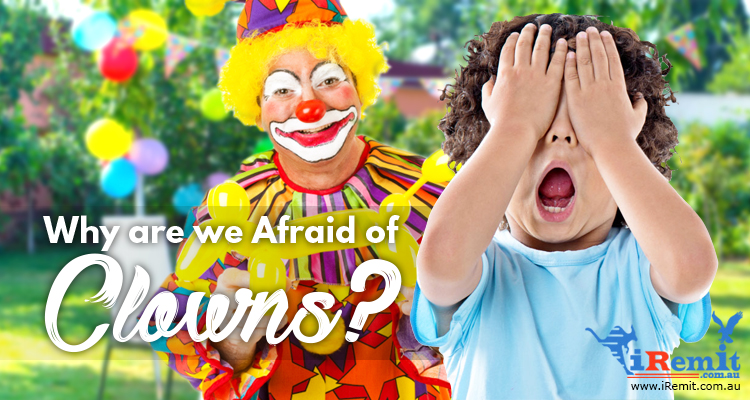 Why Are We Afraid of Clowns?

Are you scared of clowns? With psychotic creatures awakening from a 27-year slumber embodying a murderous clown (Damn you! Pennywise!), Coulrophobia or the fear of clowns resurfaced from our childhood nightmares.

Come to think of it, why are we even afraid of this people? Let us visit the history to further understand.

In history, clowns have existed as early as 2500 B.C. In Egypt, pygmy clowns have entertained the pharaohs. There are ancient clown-like figures in Native America. And court jesters are employed in noble houses in Medieval Europe.

They entertain up to the extent of mockery. They have the sole authority to insult high officials (even the king!) just for laughs. The comic relief for the struggles of reality. They bring joy and merriment to society.

Tragedy Behind the Mask

But being the comic relief soon took a toll on the Clown’s happy facade. One notable key figure in clowning is Joseph Grimaldi.

On Andrew McConnell Stott’s biography “The Pantomime Life of Joseph Grimaldi”, the life of the highly recognizable Grimaldi is far from his jovial antics. A controlling father raised him. His wife died in childbirth. By the age of 31, His son (also a clown) died of alcohol intoxication. He was constantly in pain from his stunts. And he was prone to depression.

“Grim All Day, but makes you laugh at night.” Grimaldi joking about his life. After his retirement and failed business partnership with deceitful people, he was in his worst state. After years of poverty, he died penniless as an alcoholic. It was recorded by the coroner as a “visitation from God”.

Behind the impenetrable smile, lies a tragic story. Grimaldi’s life showed the happiness-giver literally destroying a part of himself after every performance.

The Birth of the Scary Clown

With this tragic memoir, and with the aid of Charles Dicken’s writing prowess, the public became aware of this double life. Pretty much like a “viral post” in today’s standard.

In “The Pickwick Papers”, he depicted a clown who is inspired by Grimaldi’s alcoholic son. Furthermore, he was tasked to write the memoirs of Grimaldi.

Separating the clown’s acted persona to the portrayer is difficult to do. Dicken’s writings made the community question the lives of the clowns they grew to love.

Another clown, Jean Gaspard Deburaus’ Pierrot was a famed mime in France. Like Grimaldi, the detachment of Deburau’s character to his real life was hard to separate. In a failed performance in Palais-Royal, he vowed: “to play before no other public than those enthusiasts who were habitués of Boulevard du Crime”.

When a street boy in public taunted him with his “Pierrot” persona, he killed the boy with one blow from his cane. He was acquitted of the murder.

Given this disconnect with their characters, the clown’s dark image slowly loomed in time.

Years have passed and clowning went from the theatres to the circus.  They became comic intermissions in between the crew’s death-defying stunts. They are the epitome of mischief and danger.

But all changed in the era of television. Now, the clowns became entertainment for children. Evidence of this is one popular clown, “Bozo the clown”. He became the star of a very successful children show. He was so popular, the waiting list for his live audience stretched to 10 years.

In this time, clowns are associated with innocence.

Because of this, filmmakers, artists, and writers created darker depictions of the now innocent and guiltless clown. I mean, in the horror industry, it is but common to make seemingly innocuous things to be scary (Like a Killer Haunted Tape from the Ring!).

But this fictional depiction soon became reality.  A highly publicized arrest of John Wayne Gacy, dubbed as the “Killer Clown”, became the tipping point for demonizing the clown in media.

Gacy is a hardworking businessman who regularly held charities. He constantly volunteers to perform in Democratic Party assemblies and Children’s Hospital. He plays under the name “Pogo the clown” in these events.

But behind this philanthropic and charismatic front lies a deranged man. He reportedly killed 33 young men in the Chicago Area.

In his famous quote, “Oh Mr. Policeman, don’t you know a clown can get away with murder?”

He personified the horror behind that wide-smiled mask.

The fear of clowns roots from our response to a threat. A study titled “On the Nature of Creepiness” found out that the ambiguity behind a thing or someone might cause creepiness. It may arise from our recognition of a “similar pattern but not quite”. This induces a stimulus to protect ourselves from danger.

Media is not helping. With the exposé of Gacy, the perception of clowns went further south. People are now aware that the character they loved might be a psychotic killer.

To top it all of, movies such as Stephen King’s “It” (inspired by Gacy. Of course!) might have fueled a generation’s fear of clowns. The portrayal of clowns in movies is far from the jolliness of Bozo. The innocent clown now is considered a terrifying monster or a reckless and unpredictable supervillain like Joker (Batman).

It was so prevalent that organizers of a Bestival were forced to cancel a “clown-themed” party because of coulrophobic guests. Maybe that’s why we don’t see Ronald McDonald in parties anymore.

In 2016, there are numerous sightings of clown-guise in England, United States, and Canada. It was a “Creepy Clown Epidemic”. We are not sure if this was a publicity stunt or a real serial killer.

It is technically not illegal to wear a clown outfit. We can’t really maul someone for wearing a clown suit. But what’s for sure is that it gave an unsettling feeling over people in the vicinity.

As with any fear, and assuming you have genuine coulrophobia, Cognitive Behavioral Therapy and/or Exposure Therapy can help you fight this fear. But are you up to the challenge of “exposure” with clowns?