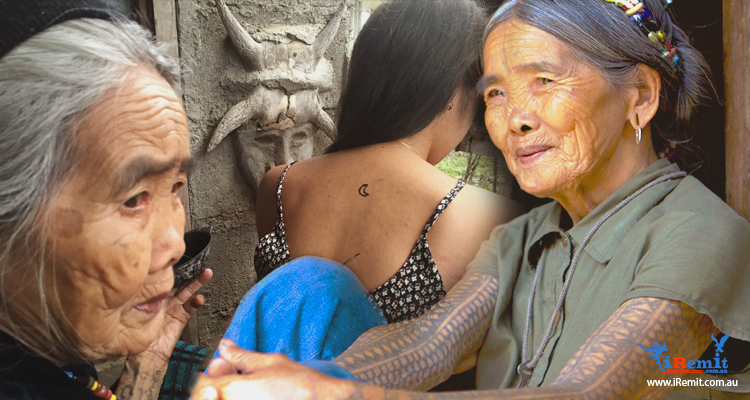 By Serena Estrella in Traveling to the Philippines
October 14, 2016

Who is Apo Whang-Od and Why Are People Lining Up For Her Tattoos?

People get tattoos for all sorts of reasons: to commemorate a milestone (such as when you’re of legal age to get one without asking your parents for permission), to honor a loved one (Remember Johnny Depp’s “Winona Forever” tattoo?), and perhaps even to mark one’s separation from the said loved one (Remember Johnny Depp’s “Wino Forever” tatt– wait, are you seeing a trend here?).

And now, here’s another reason: to take part in a dying tribal body art tradition.

Those who get a tattoo from Apo Whang-Od (pronounced “Fang-Od”) want exactly that. Born in 1918, the 97 or 98 year-old Butbut Kalinga native is considered the oldest tattoo artist in the Philippines. She is also the last practicing “mambabatok,” a term used to describe someone who uses the thorn end of a calamansi or pomelo tree to tap (hence the term “batok”) a permanent design onto the skin.

The indigenous Butbut Kalinga tribe, from which Apo Wang-Od hails from, had this tradition of bestowing honorary tattoos on warriors who protected the villages and commemorative ones on young ladies entering womanhood. However, as the 21st century dawned, it appeared that the modern world had no place for this ancient art form. Butbut Kalinga warriors are in short supply these days, if there are any of them still remaining, and the tribal youths have all but eschewed the practice.

It wasn’t until recently that people began exhibiting renewed interest in the “mambabatok” method of tattooing. The knowledge that this tribal art form could disappear at any time probably helped; tradition dictates that such tattooing skills could only be passed on to descendants within the same lineage. (It is believed that a tattoo made by someone outside the bloodline will inevitably result in an infection.)

In the past few years, many Filipino travelers have made the arduous trek to get inked by Apo Whang-Od, including celebrities like Rhian Ramos and Drew Arellano. These days, the Kalinga elder’s tattoos are perhaps the ultimate hipster symbol. I suppose if you can sit through having an old lady whacking soot ink repeatedly onto your skin without passing out and pooping your pants (true story), you deserve to put as many hashtags as you want on that Instagram post of your new tat.

Interest in Apo Whang-Od’s technique isn’t confined to the Philippines either. This year, she was chosen as one of the featured artists in the exhibit entitled “Tattoo: Ritual, Identity, Obsession, Art,” which recently made its way to the Royal Ontario Museum in Canada from the Musée du Quai Branly in Paris. A 26 year-old Australian named Will Hatton also braved the dangerous trip to Whang-Od’s doorstep to get a fern tattoo, and even wrote about it on an article for news.com.au.

And now, Kalinga’s most famous tattoo artist may be up for a national award. Last September 9, it was confirmed that Apo Whang-Od has been nominated for the Gawad sa Manlilikha ng Bayan or GAMABA.

Also called the National Living Treasures Award, the GAMABA is bestowed upon citizens with a high level of technical and artistic excellence in any Filipino traditional art, and who have sought to pass down the same to younger generations in his or her community. Should GAMABA Committee’s Ad Hoc Panel of Experts decide to give the award to Apo Whang-Od, she will be the third awardee coming from the Cordillera region.

Thanks to all this new publicity, there is now hope for reviving the dying tradition of “mambabatok” tattoo art. As Apo Whang-Od was childless when her husband died decades ago, she has now opted to train Grace Palicas, her sister’s granddaughter, in the practice.

Hopefully, Apo Whang-Od’s story will inspire us Filipinos to appreciate our rich cultural heritage, and thus be a lot more vigilant about preserving such beautiful and meaningful traditions for future generations.