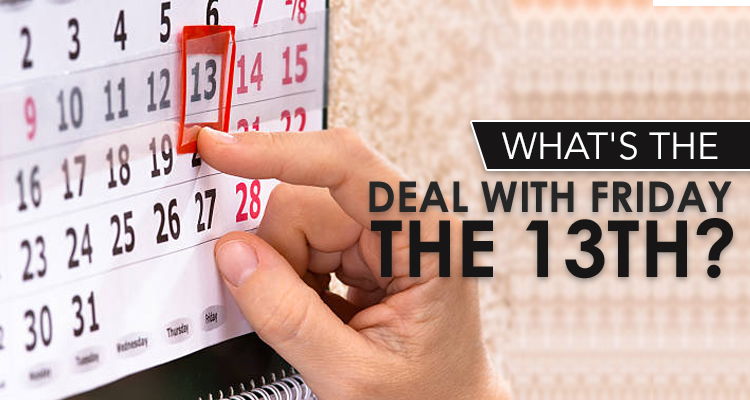 What’s the Deal With Friday the 13th?

People generally look forward to Fridays. Majority of us consider it the beginning of the weekend throughout our lives, given that there’s usually no work or school on Saturdays and Sundays.

Except when it happens to fall on the 13th of the month, that is.

Humans have long been inclined to imbue numbers with all sorts of esoteric meanings. You’re probably familiar with some of them: 666 being the devil’s number or “the mark of the beast,” 3 AM as the witching hour, and so on. Heck, even J.K. Rowling’s Harry Potter books place a huge emphasis on the number 7: 7 horcruxes, 7 Quidditch players, 7 Weasleys, etc.

13, though, appears to be the most notorious throughout history. Why so? And how did Friday come to share its negative connotations? Let’s take a look:

Christian legend attributes the number 13’s notoriety to the greatest traitor in its history: Judas Iscariot. On the evening of the Last Supper, Jesus and his 12 disciples all gathered together, with his most infamous one turning up as the 13th guest (and we all know how that turned out).

This also coincides with a Norse myth wherein Loki crashes a dinner party in Valhalla as – you guessed it – the 13th guest. Immediate chaos and destruction apparently ensued, not least because the trickster god ended up shooting Balder, the god of joy and happiness. A Marvel movie, it was not, obviously.

If you’ve read (and actually believe) Dan Brown’s “The Da Vinci Code,” the infamy surrounding Friday the 13th began on 13 October 1307. On this supposedly unholiest of Fridays, King Philip IV of France ordered the arrest of hundreds of Knights Templar. The Catholic crusaders were placed on trial for trumped-up charges of desecrating holy sacraments (e.g., spitting on a crucifix), blaspheming, and committing sodomy by way of initiation, and then sentenced to burn at the stake.

However, the word was that the outrageous claims were just a convenient way for the French king to persecute and penalize the worthy order, and that their executions nullified the debts he owed them for levying war upon England. Thus, the Templar Grand Master, Jacques de Molay, was said to have cursed all those who gravely wronged them as he faced the flames in front of Notre Dame Cathedral: “

God knows who is wrong and has sinned. Soon a calamity will occur to those who have condemned us to death.”

De Molay’s ringing curse is said to have endured throughout the ages, with bad luck raining down upon one and all on every Friday the 13th that followed the one which initiated the wipeout of his order.

It sounds like the stuff of best-selling conspiracy novels, to be sure, but credit for Friday the 13th’s effect on the 20th and 21st centuries’ consciousness has far less dramatic roots. Sometime in 1907, author Thomas William Lawson wrote a book entitled – wait for it – “Friday the 13th.”

It featured an unscrupulous stockbroker who, perhaps drawing inspiration from the Templar tales, chose to sabotage the stock market on the date coinciding with the book’s title, Wolf of Wall Street style.

Lawson didn’t exactly invent the notion of such an unlucky day, but his novel did go on to spread the superstition, so much so that more than 70 decades later, 1980’s pop culture would give us the “Friday the 13th” movie franchise. Considering how Jason Voorhees, the featured villain, was born on Friday the 13th and that cyclical events throughout the series’ 12-film run occur on the same such days, Lawson probably would have been chuffed at how far his literary piece has penetrated our collective cultural consciousness.

We’re a long way off from the superstitious ignorance of the Middle Ages, but that doesn’t meant we’ve shook off the sense of foreboding that some of us might feel just by glancing at today’s calendar.

It’s been estimated that days like today result in US$800-900 million in lost business, simply because about 17-21 million people in the United States alone are so crippled by their irrational fear of Friday the 13th. As a result, many of them avoid doing business, traveling long distances, or even leaving the safety of their houses until the day passes.

Such is the power of this belief that there’s even a specific term for the phobia pertaining to Friday the 13th – paraskevidekatriaphobia. (Okay, I won’t even attempt to pronounce that.)

But Is Friday the 13th Really Unlucky?

Probably not. Apart from the fact that there’s no real evidence for it, different cultures have different versions of the myth. Hispanic and Greek culture, for instance, look askance at Tuesday the 13th instead. Italians, on the other hand, consider Friday the 17th to be an ill-fated day due to the Roman numerals for the date being an anagram for an ominous phrase meaning “I have lived,” which implies death in the present (XVII (17) = VIXI, the said Latin phrase).

Furthermore, because people tend to be more cautious on this day more than any other day throughout the year, there are actually less accidents occurring on Friday the 13th, statistically speaking.

That is certainly comforting as I’m actually due to fly out today, and the date does give me the heebie-jeebies somewhat. Oh, well, I’ll probably just throw some salt over my shoulder before boarding the plane for good measure.