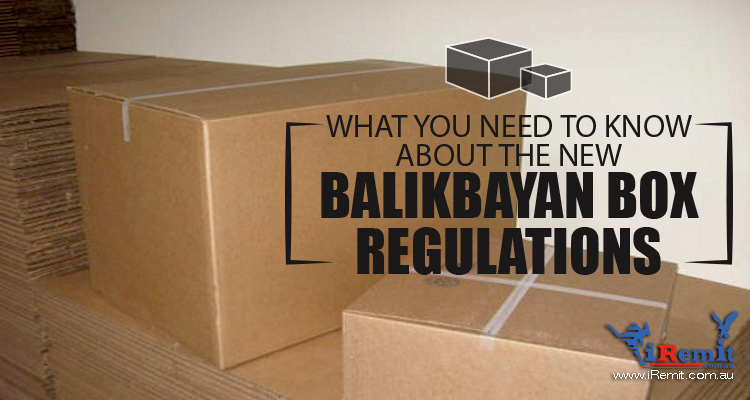 What You Need to Know About the New Balikbayan Box Regulations

If you’re planning to send a balikbayan box over to the Philippines, you better do it soon.

The Bureau of Customs’ new rules for expats sending these boxes were announced shortly after that satirical article (i.e., fake news) on one of their employees caught taking an expensive SLR camera out of a balikbayan box went viral, and is due to take effect next week, specifically on 1 August 2017. And they’re already being criticized for being unfair to overseas Filipino workers.

Take a look at the new restrictions and see for yourself:

The BOC order stipulates that OFW’s should address their packages to a family member, such as a spouse, child, sibling, parent, grandchild, grandparent or a niece/nephew. If the box is addressed to someone outside the immediate family, such as a friend or girlfriend/boyfriend, the OFW’s tax-free privilege will no longer apply.

2. Senders will now have to fill out information sheets declaring the contents of their balikbayan boxes, and will also have to provide copies of receipts for those that they have purchased.

These information sheets can either be downloaded online or availed of from accredited couriers or foreign freight movers.

Everything in the box must be declared, even used or secondhand items, along with their accompanying values. If an OFW were to pack a new purchase into the box, they should also provide the necessary receipts to certify their value. Those who fail to include an itemized list with the accompanying receipts will be penalized with additional duties and taxes.

The BOC clarified, however, that receipts wouldn’t be necessary for gifts, groceries, and secondhand items, and should only be declared with an “approximate” value. A used shirt that was initially bought for Php500, for instance, can have a declared value of Php100 on the information sheet.

This means that personal items sent via balikbayan boxes are exempt from taxes so long as their declared value does not exceed Php150,000. Previously, the ceiling was set at Php10,000, so this is perhaps the one change in the new policy that is welcome.

4. OFW’s must also furnish freight forwarders with copies of their passports when sending balikbayan boxes.

This will serve as proof of the sender’s nationality.

5. All shipments will undergo X-ray examination under the guidance of BOC personnel.

Should they find an item inside the package that wasn’t declared on the information sheet, they can open up the box and examine all of its contents. If a discrepancy is confirmed, the shipment will be segregated and will only be released once the sender complies with the existing rules.

The proposed new measures have been met with disapproval and even protest from both OFW groups and forwarding companies. Many OFW’s feel that the new restrictions preventing them from sending balikbayan boxes to friends and partners greatly impairs their tax exemptions under law, while some freight forwarders have stressed that such policies will delay the shipping and delivery of packages.

As of now, only time will tell if the BOC’s new directives will succeed in deterring smuggling, which they outwardly claim is the reason for the tighter restrictions, or if these will only make our OFW’s lives even harder.