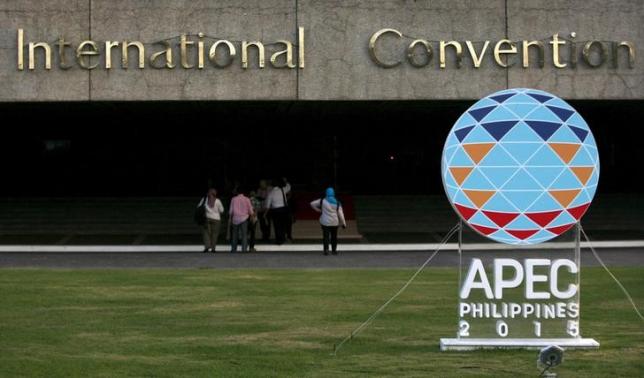 The Philippines is host to this year’s weeklong APEC’s summit.

The Asia-Pacific Economic Cooperation or APEC is a forum for 21 Pacific Rim member economies. APEC promotes free trade throughout the Asia Pacific.

APEC is the “highest-level, most influential economic forum in the Asia-Pacific.” Accounting for 57% of the global gross domestic product, the objective of the APEC is to encourage free and open trade and investment.

The members of APEC:

10 years after foundation, Chile, Peru, Russian Federation and Vietnam completed the 21 member economies. India has also requested to be part of the APEC but was only invited as an observer in 2011. One of the many reasons India was not given membership was because it does not border the Pacific Ocean unlike all current members do.

Only leaders from Indonesia, Russia, and Taiwan are not attending although representatives are joining the summit.

Also, most of the leaders’ wives are coming along with several staff.

At the same time, the country is on full alert status since Thursday last week as a matter of procedure.

In light of the attack in Paris, France, military and police officials were on highest alert although President Aquino maintained “there is no credible threat registered at this time,” however, he did not throw away caution and reminded everyone to be cooperative and vigilant.

In addition, according to PNP Chief Supt Wilben Mayor, “No specific threat has been monitored anywhere in the country, but target-hardening measures on vital installations, particularly airports, seaports, train stations and other public areas have been further elevated to maximize deterrence against unforeseen events.”

The government rented BMW 7 series, it was chosen not just out of luxury but also for the security features.

Additionally, Malcañang announced that 17 and 18 November are special non-working holidays in the Philippines in an effort to free the roads from heavy traffic. Additionally, the public sector or Government Offices, including Central Bank of the Philippines, will be closed for 4 days from November 17 to 20.

Additional measures like roadblocks and re routing are also in place in major through-ways and highways where the APEC meetings are in place.

Street dwellers and street vendors were rescued and banned from staying anywhere near the vicinity to remove any possible obstruction.

Ninoy Aquino International Airport officials also discourage people to have flights between November 16-20 to avoid inconvenience. Arrival of leaders may cause restrictions in takeoff and landing because of international protocol and security demand. This resulted to nearly 800 domestic and international flight cancellation due to the APEC summit week.

Bank transactions may also be disrupted. Only selected bank branches in Metro Manila can open on 18 and 19 November. Philippine Clearing House Corp will operate only on 17th and 20th. Check deposits on 18 and 19 will be considered deposits received on 20 November.

The public is assured that ATMs have enough cash to dispense during the APEC meeting.

If you plan to send remittance, send them today 16 November. Regular working days for most companies in Metro Manila will resume Monday, 23 November. Special thanks to Reuters for the main image.