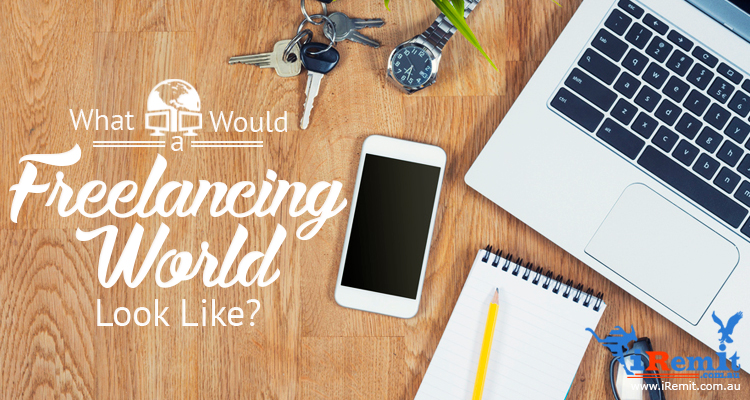 By Serena Estrella in Business and Career
May 17, 2017

What will the world look like when freelancing or remote work becomes the norm?

It’s quite a simple question, but it’s one that inevitably engenders complex, multiple answers.

In America alone, the total number of freelancers was pegged at 53 million just last year, and it’s been estimated that 50% of the population will be working remotely or independently in some way by 2020. Given that the average freelancer is below 35 years of age, that percentage isn’t likely to be far off the mark.

Today’s emerging technologies also converge with this trend, with digital platforms constantly expanding the availability (and suitability) of remote workers in industries that vary from accounting to graphic design. Heck, when you think about it, ubiquitous platforms like Uber and AirBnB also gave rise to what is dubbed the “gig” economy, especially when you consider how they disrupted the taxi and real estate industry by allowing millions of individuals to leverage on their cars and living spaces for extra income.

We’ve gone on about how the rise of remote work is bound to bring costs down in the workplace and how it could mean better flexibility for workers, but what are the other effects that could possibly manifest in a freelance-driven world? And most importantly, would all these changes be good?

Let’s look at the more obvious ones first.

If more people work from home, that could mean less traffic on the roads. Less traffic generally means higher efficiency (as more things can get done in one day if you can get around faster). More telecommuting options also brings in more people to the workforce, specifically those for whom a traditional set-up wouldn’t work (e.g., new mothers, military veterans, or physically-handicapped persons), opening up a richer pool of talent.

Those two put together can potentially boost a country’s gross domestic product significantly, possibly paving the way for more businesses and in turn, more jobs to surface.

Another possible effect of widespread freelancing would be redefined job qualifications. A bachelor’s degree from a prestigious university may no longer be necessary for gainful employment in the future.

Remote employers tend to look for a very specific skill set, you see, such as experience in setting up and maintaining a website or manning a social media account. And more often than not, you don’t really need to attend college to learn those things. Most remote employers wouldn’t care how you came across these skills so long as you have them, and that could very well mean that fewer people would actually go into student debt so they could attend college AND get employed.

All well and good so far, but what’s the flipside of a freelance-oriented world?

For starters, the increased freedom and mobility that freelancers enjoy often comes with a price: the lack of a safety net. Your office-bound counterparts might have to come in every day from 9 to 5, doing the same boring tasks and working for the exact same boss, but they do have access to FIXED AND REGULAR PAY, health care benefits, retirement funds, and paid vacation or sick leaves, none of which employers are obliged to provide their remote staff with.

And while there are a handful of remote workers who bring home an annual salary of more than USD50,000, the median pay for freelancers can hardly be considered a livable wage in most cities. Furthermore, there’s also the lack of steady pay. The increasingly cutthroat nature of this industry has led to many freelancers going months without paid work or severely underpricing their services, making it difficult to manage one’s finances for the future.

Because the freelance industry is hard for governments to regulate (there are just so many kinds of work permutations to pin down and minimum wage requirements vary from country to country), remote employers have A LOT of leeway when it comes to determining how much they pay their workers, how long they keep them employed, and what benefits to give them, if they choose to give them any benefits at all. In most cases, if a freelancer gets sick and can’t work that day, they don’t get paid at all.

Lastly, remember those redefined job qualifications we talked about earlier? Sure, they level the playing field, but that’s not always a good thing.

Imagine that you are an experienced writer who is both well-read and well-traveled. Conventionally, that should entitle you to higher pay than an amateur writer who can’t really tell the difference between “their” and “they’re.” But because there are so many amateurs in the field, that lowers the going rate and you’re not likely to book a client if you charge significantly higher for your services (even if it’s for a good reason).

As a result, minimum wages in a freelancing world are likely to be low.

In conclusion, freelancing is here to stay, whether we like it or not. It’s also likely to be more common than ever, but for it to be truly sustainable, someone needs to come up with a way to regulate it so that all stakeholders, including- oh come on, especially the workers – would benefit.