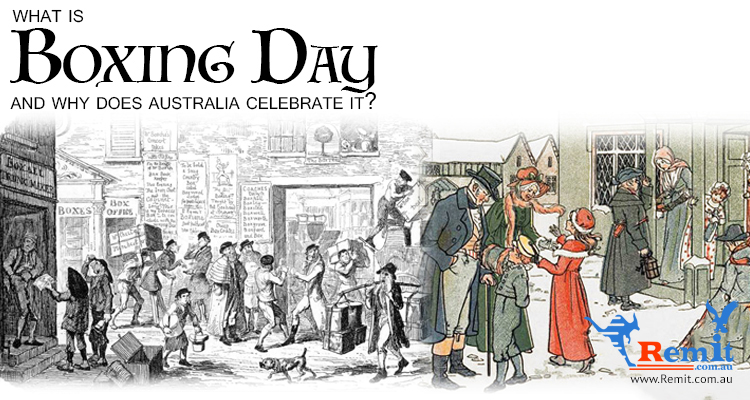 By Serena Estrella in Home and Family
December 26, 2016

What Is Boxing Day and Why Does Australia Celebrate It?

Given how long the Filipino Christmas season is (we start the festivities in September and don’t end them till January, for crying out loud), it’s quite ironic that we don’t celebrate Boxing Day. Heck, most of us don’t even know that the day after Christmas is an occasion in itself.

For starters, no, Boxing Day isn’t when Manny Pacquiao takes on yet another opponent in the ring (although that results in an instant holiday for most people, Christmastime or not).

The 26th of December actually has its origins in a much more noble (and less painful) practice. It is said to have begun in England during the Middle Ages, when the servants of wealthy families had to work on Christmas Day. (Come on, did you think those princes and princesses cooked their own Noche Buena? Of course not.)

To make up for it, the said servants were given the day off the morning after to visit their families and to celebrate Christmas as they wished. Before they left on their respective outings, each servant would receive from their master a box containing gifts, bonuses, or even leftover food from the previous night’s feast. In some variations, these Christmas boxes also referred to the ones that tradespeople would collect from their clients on the first working day after the holiday in gratitude for their services throughout the year.

In another variation of the origin story, Boxing Day refers to the boxes placed inside the churches to collect money for the poor. These donation boxes are then opened the day after Christmas and distributed among the less fortunate. (Another spin on the tale has a sealed box onboard sailing ships for good luck. If the ship was lucky enough to complete their voyage safely, the box was given to a priest, who would then open it up at Christmas so that the contents could be given to the poor.)

Today, Boxing Day is celebrated with family and friends, and the first working day after Christmas is considered a bank holiday. These parties are usually open gatherings with food, friendship, and familial love in abundance. Boxing Day feasts are also great for repurposing leftovers from Christmas dinner. Slices of roasted turkey or baked ham are served as sandwiches or as a complete meal with vegetables, gravy, and stuffing (provided you aren’t sick of this fare by now).

So, why does Australia celebrate Boxing Day while we don’t? The answer’s quite simple: the practice originated in the United Kingdom, in England particularly, so it spread throughout all its colonies. Since Australia counted as one (albeit a penal sort) and continues to be part of the Commonwealth, the Boxing Day tradition naturally figured into its overall culture.

Of course, the early Australian colonial settlers probably didn’t abide by the custom of giving Christmas boxes to their servants, but I doubt anyone would turn down the chance to have one extra day to celebrate before going back to work.