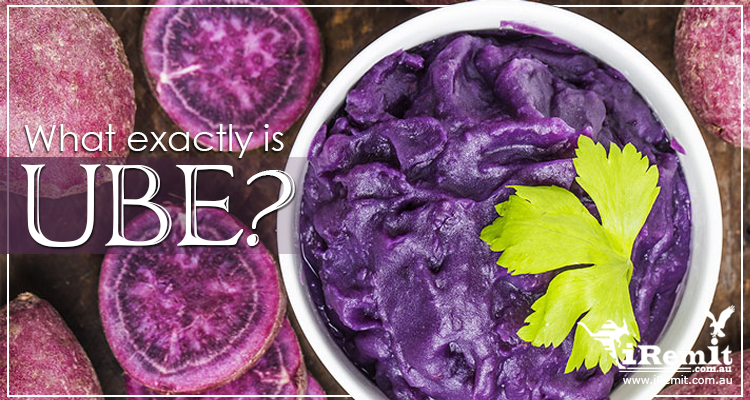 By Serena Estrella in Food and Drink
December 28, 2016

What Exactly Is Ube?

As a Filipino, watching foreign hipsters go gaga over ube (pronounced “oo-beh,” and not “oo-bae,” as some magazines would have you believe) is surreal. It’s just like watching a childhood friend become a world-famous pop star, especially since we’ve been eating the creamy purple mush (the ube, not the childhood friend) our whole lives.

Who can forget those delicious, melt-in-your-mouth ube birthday cakes from Red Ribbon? Or that sweet, lilac-colored spoonful topping a cold glass of halo-halo on a hot summer’s day?

Nowadays, the humble, violet tuber is the unorthodox star of quite a few Western dishes, and we Filipinos are no longer the only ones craving it.

But what is it exactly?

Dioscorea alata, or purple yam, is a tuberous root vegetable that has a natural bright lavender color, hence the name. It can sometimes appear to be white, and is often confused with other tubers like taro. While ube is abundant in Southeast Asia, it has been most widely-used in the Philippines, where its affinity with sugar has made it a common ingredient in many local desserts.

With a taste profile that’s described as anywhere between an earthy, white chocolate-flavored sweet potato to a vanilla-scented pistachio nut, ube has steadily been creeping onto the menus of fancy US restaurants and the most inspirational Instagram accounts.

Take the Golden Cristal Donut from Brooklyn’s Manila Social Club, for instance. The obscenely expensive donut (a dozen will set you back by about USD1,000) was made with a Cristal champagne and ube mousse batter, and then covered in gold flakes. But while it’s certainly a show-stopper (you’d probably think twice before stuffing your face with it, unless you’re a Kardashian), the eatery’s real star is its standard, fuss-free ube donut.

Called Ube Bae, about 40 dozen of them are produced every week and they still get sold out. Sometimes, there’s even a three-week waiting period for these babies. Crazy.

Our favorite purple tuber has yet to make waves in Australia, but given how it’s being given an enthusiastic reception recently, perhaps it won’t be long before you can find a jar of ube jam next to good ol’ Vegemite in the grocery.