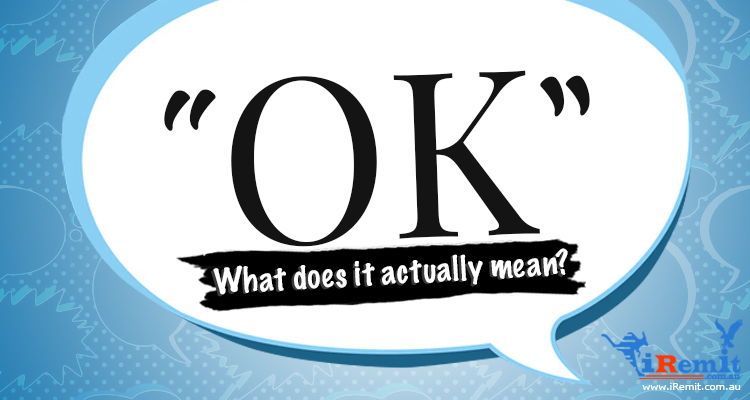 What Does “OK” Actually Mean?

We say it all the time. Two mere letters, four if you’re formal, and one if you’re the type of person who replies to lengthy emails or text messages with “K.” (Ugh!)

But have you ever wondered what “OK” actually stands for and where it originated?

Interestingly, this catch-all word started out as a joke. You know how people sometimes like to spell words wrong (e.g., jejejejeje or e0h p0whz) for fun? Well, that trend was in place long before millennials were even born.

Back in the 1830’s, it was fashionable for editors to make up playful abbreviations like ISBD (“It shall be done”) and RTBS (“Remains to be seen”), much like how we say OMG and FTW today (for our non-millennial readers, those expressions mean “Oh, my God” and “For the win,” respectively).

However, some writers liked to mix things up a bit more by purposely using alternate spellings or outright misspellings for such abbreviations. So, “no go” would become  “KG” (“know-go”) and all right was “OW” (“oll write).

So, “OK” originally meant “oll korrect” (“all correct” or rather, “all good” as we would define it today), but it has endured for nearly two centuries because of sheer luck.

Some years after “OK” was coined, Martin Van Buren ran for President in the US. He was nicknamed “Old Kinderhook” after his birthplace in New York State, so his supporters formed the “OK Club” to capitalize on the “OK (oll-korrect)” trend going on.

Unfortunately, the opponents of “Old Kinderhook” seized on this too and turned OK into negative political slogans like “Out of Kash,” “Out of Karacter,” “Orfully Konfused (Awfully Confused),” and “Orful Katastrophe (Awful Catastrophe).”

As a result, the word “OK” was constantly in people’s faces during that time, and the rest, as they say, is history.

Fast forward to today, and the word “OK” means a lot of things. Sure, we still use it to indicate that things are, well, okay, but it can also mean that something is mediocre (as in, “Was your date hot?” “S/he was okay.”). Technically, “okay” is an incorrect spelling, but it’s evolved into a verb as well (as in, “Trump okayed the price increase on spam just to mess with Filipino migrants).

Perhaps that’s exactly why “OK” is still widely in use almost two hundred years later: it’s easy to remember, easy to say, and can mean anything or nothing. All of which is a whole lot more than we can say for terms like “on fleek,” “bae,” or whatever us darn kids are saying nowadays.