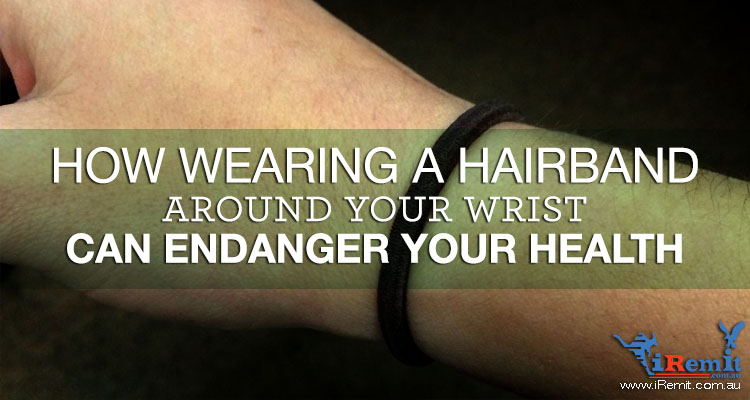 By Serena Estrella in Health and Fitness
September 27, 2017

How Wearing a Hairband Around Your Wrist Can Endanger Your Health

Sometimes, it seems that everything in the world is out to kill you. Chocolates, fast food, your favorite perfume, getting heartbroken, sitting down too often, etc.: all these things will either clog your arteries, give you breathing problems, and deprive you of the will to live, not necessarily in that order.

And now, we can add another item to that list: wearing a hairband on your wrist.

No, I kid you not. This mundane gesture that we’ve been doing since elementary school (how else can you make sure that you can tie up your hair if needed?) is actually potentially life-threatening.

There was a recent story about a woman named Audree Kopp who, like most people, frequently wore a hairband on her wrist. She then noticed a growing bump on her wrist, which she first assumed to be a spider bite.

But then, it refused to go away, even after Kopp went through a course of antibiotics prescribed by the doctor. When that didn’t work, she had to get surgery at the emergency room to get rid of the infection.

The injury was traced back to when the Louisville, Kentucky native had on a glittery hairband while spending all day moving into her new place. The rough, sparkly edges had abrasively rubbed against her skin, allowing bacteria to seep into her body through her skin pores and hair follicles.

While there were no big, gaping wounds, Kopp’s attending physician said that things could have been worse. Once harmful bacteria get into the bloodstream, people’s bodies tend to shut down and go into a coma. Hairbands worn on the wrist are often overlooked culprits in such cases, but they are actually breeding grounds for bacteria because they are in close contact with oils from your hair and body, and are rarely changed yet are frequently worn next to the skin.

So, should we all just chop our hair short and stop toting elastic bands and scrunchies on our wrists? Fortunately, no.

There are lots of ways to get an infection, and Kopp’s case is more of a fluke than a rule, but if you want to stay on the safe side, you can abide by the following tips:

Watch out for hair ties that feel like they’re cutting off the blood supply to your hands. If you find deep indentations on the skin of your wrists after taking them off, you may want to loosen them up by tugging and stretching them a bit. Wearing anything too tight can cause anything from vascular disorders to skin ruptures.

While we’re at it, skip the glittery ones as well. Sure, they look cute and all, but those tiny, rough bits of paper can rub against the skin and cause micro cuts, through which naturally-occurring bacteria on the skin can contaminate the bloodstream.

We change our socks and underwear everyday, and clean them regularly prior to every use. Hairbands can accumulate bodily dirt and grease just as easily, so we should do the same with them.

You should especially remove your hair tie from your wrist if it was there the whole time while you were tending to a sick person or carrying out grimy, dirty tasks like cleaning the toilet or segregating the garbage. Any germs you may encounter are likely to cling to your hairband.

Lastly, don’t sleep with your hair tie on. First of all, it’s not a security blanket (duh). Secondly, you need to let the skin breathe by leaving it unconstrained, preferably whenever you go to bed.

3. Don’t forget to clean the area under the band when washing your hands.

It might be standard procedure to wash your hands before and after eating, and after using the bathroom, but you shouldn’t neglect the skin on your wrists either.

When soaping up, reach past your palms and rub at your wrists gently yet thoroughly before rinsing. Doing so will help keep the skin under your hairband clean, making it less likely for you to get an infection in such a manner.

So, there we have it. Yet another item on an ever-growing list of things for humans to worry about. What a way to start the week indeed.