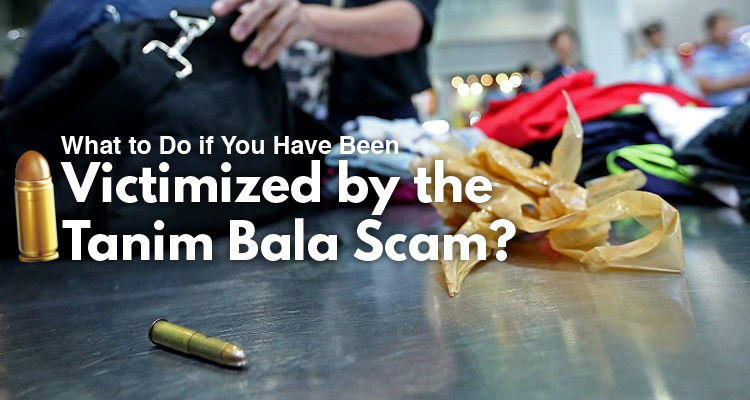 What to Do If You Have Been Victimized by the Tanim Bala Scam?

The Tanim Bala scam has been thought to be long gone. But is it back again to harass us?

What is the Tanim Bala Scam?

For those who don’t know, the tanim bala scam is a modus allegedly peddled by airport officials that brought about wild uproar by social media and the international community. The modus starts with an alleged airport official planting a bullet in the luggage of a victim.

Under Republic Act 10591, it’s unlawful for anyone to possess or buy firearms and ammunition without the license to do so. So if they found bullets in your belonging, you are held up for questioning. And during the high time of this scam, the victims are not allowed to leave for their flights unless they pay up a “fee”. If you know what I mean.

There are many things you shouldn’t do in the airport. But if you are blamed for something you are innocent off, it can really be infuriating. It was so prevalent back in 2015, it even got featured in Japan! *Slow clap*

But kudos to the today’s administration as the instances are now lessened. I mean, President Duterte will shove the throats of the perpetrators with the bullets they have planted. And to be honest, I think they deserve to eat those bullets for creating unnecessary drama.

But in recent events, airport authorities found a 9mm bullet in Kristine Bumanglag-Moran’s luggage. She is an employee bound for Zamboanga city last June 15, 2018, with her mother and children.

When called out, Kristine thought that security officers were just about to inspect the black box (a device used in physical therapy) in her luggage. But surprisingly, what they saw was a bullet in the pocket of her luggage.

Kristine went ballistic when they asked her to go to their office. In the end, the bullet was just confiscated and Kristine and her family were allowed to board their flight. The airport authorities said that if such case happens, the passenger just logs the incident in a logbook and the bullet is just confiscated.

But this didn’t stop her from posting this outrageous happening in social media as a warning for everyone.

But come to think of it, what do we do if this happens to us? What are your rights if you’re victimized by the Tanim Bala Scam?

Do Not Open the Bag without your Lawyer, Witnesses, and the Airport Police

You should not allow them to open your bags without these authorities. You wouldn’t want them to alter anything or indict you of something without your own legal protection.

If you don’t have a lawyer, you can call the Public Attorney’s Office (PAO) in this 929-9436. The presence of your own legal defense is important to the case and PAO is ready to protect you from this unscrupulous individuals.

Presented with the bullet, you might be deceived to touch it. Your fingerprints on the bullet might conclude ownership of it. So never touch the bullet. EVER.

This is an additional precaution. I don’t know how to plant a fingerprint in an item. But be better safe than sorry.

DO NOT PAY ANYONE

Lastly, if they extort you for money, do not succumb to their pressure. If you did the right things above and if they didn’t find any of your fingerprints in the bullet, you can file charges against the airport personnel.

You will be entitled to compensation for the lost time and interruption. They are also liable to rebook your flight.

So with that, let us be vigilant against this modus. Stay safe!