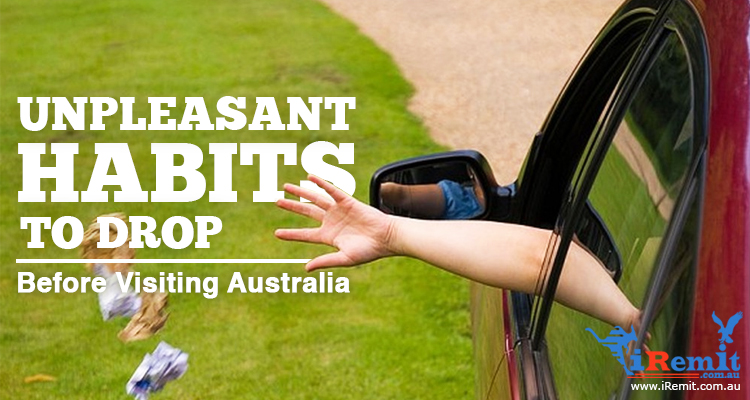 By Serena Estrella in Life in Australia
March 22, 2017

Gone are the days when you had to sell a kidney to take a vacation abroad, particularly to Australia. Don’t get me wrong, the PHP-AUD exchange rate still makes it a bit expensive to get around, but budget airline piso fares and AirBnB accommodations significantly diminish how much you need to save up for an Aussie holiday.

Let’s say you’ve finally managed to save up for an exciting week in Sydney or Adelaide. (Congratulations on that, by the way.) You probably already have an itinerary planned, and are all but bursting out of your skin to get started on what would undoubtedly be a highly memorable vacation.

However, we should also remember that as tourists, we are guests in someone else’s home country. As such, let’s be wary of certain kinds of behavior that, while ignored or even tolerated by us Filipinos, are frowned upon by other nationalities.

For starters, there’s the tendency to not pick up after ourselves. Take a stroll down the side streets of Manila, especially in Baclaran or in Divisoria, and you’re bound to see empty soft drink bottles, food wrappers, and cigarette stubs scattered across the road. Many of us are so used to the sight that we hardly even notice it anymore, but as the Aussies value cleanliness in their surroundings, it wouldn’t be advisable to toss your meat pie’s wrapper on the ground once you’re finished eating.

Rather, you should look for the nearest trash can and then dispose of your garbage properly. Fortunately, cities like Sydney have plenty of garbage bins in public places, and they even have those built-in metal slots for putting out cigarettes if you feel like having a smoke after a meal.

Speaking of following the rules, neglecting to read signs and/or disobeying them can get you in real trouble here. I once had a balikbayan aunt who quipped that traffic signs in the Philippines are but suggestions since we locals tend to violate them on an almost daily basis (but somehow narrowly miss getting into an accident, go figure).

In Australia, however, warning signs are there for a reason. Not only do they stop you from unwittingly crossing on the wrong side of the street, but they can literally save your life. Aussies share their vast continent with some of the most dangerous creatures on the planet, hence the numerous signs in most outdoor locations. So, when there’s a sign that says “Danger: Amoebic Meningitis” in front of a placid-looking pond or lake, go with that “suggestion” and just find another spot to swim in, please.

By now, you may have noticed that Aussies are among the most laid-back people on the planet. They’re a largely warm and informal people who prefer not to go by fancy titles (even if they happen to have one of those). Thus, to blend in properly, you may want to refrain from bringing up whatever rank or position you had/have back home.

What does that mean? Well, have you ever noticed how certain people like to blurt out things like “Don’t you know who I am?” or “Back in my country, I am rich and famous” (okay, maybe not those exact words, but you get the point) whenever they don’t get their way? I’d like to think that we Filipinos are largely a laid-back people too, but unfortunately, I’ve seen too many fellow Pinoy travelers acting out like such when abroad. And honestly, it can be very embarrassing and uncomfortable for everyone involved.

While we’re on the topic, self-service in Australia means exactly that. Of course, there are plenty of restaurants and attractions here where you can expect a high level of service, but fast food places aren’t one of them. Expecting to be waited on hand and foot in these places will thus get you nowhere, so please get your own water from the dispenser (especially if it’s right in front of your table) instead of threatening/coercing/forcing the hapless lad or lady behind the cashier to get it for you.

Lastly, Australia is big on diversity, not just biologically (hence, the kangaroos, koalas, and Tasmanian devils cavorting about the place) but also culturally. Many kinds of people call this amazing country home, and they have all learned to live harmoniously with each other. Making fun of others for being different is a big no-no here, so hold off on making racist comments or jokes (the kind that sadly dominate noontime shows in the Philippines) while you people-watch during lulls in your itinerary.

The actions mentioned in this article might seem minor, trivial even, but we should remember that we represent our country whenever and wherever we go abroad. Thus, we should always take care to preserve our image as a hospitable and respectful race, primarily by consciously avoiding nasty habits and being on our best behavior.