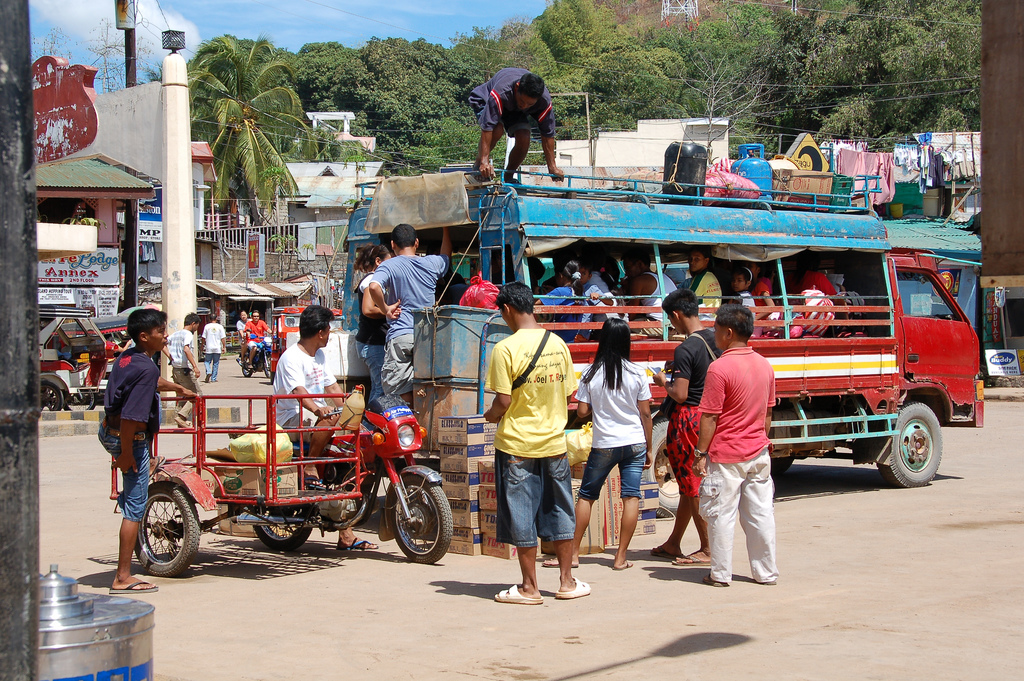 By Candice C in Traveling to the Philippines
March 1, 2016

Unique Modes of Transportation in the Philippines

Metro Manila and neighboring provinces are notorious for its traffic.

However, aside from the traffic, the country’s major roads, smaller streets and dirt roads are witness to some of the most colourful and sometimes weird and dangerous modes of transportation.

If you are going to visit the Philippines for the first time or you just want to reminisce, here is a list of some land transportation found only in the Philippines. 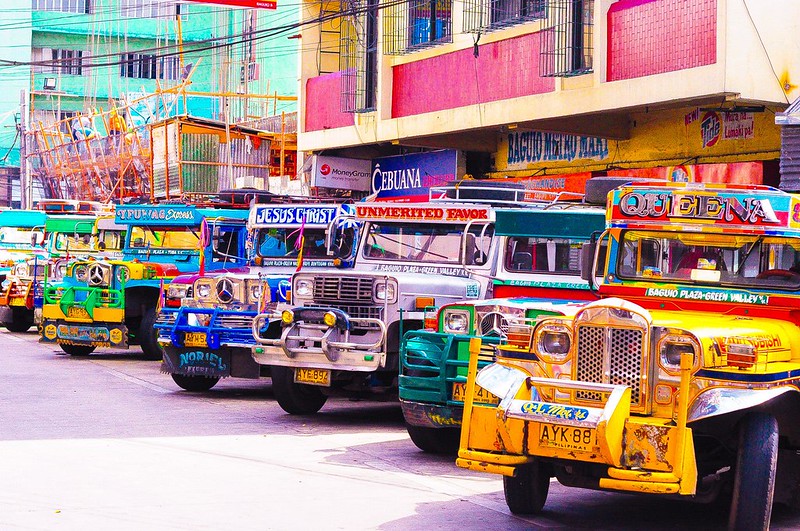 Jeepneys or simply jeeps are almost a trademark of the Philippines. This is the most common form of transport in the city and in provinces.

The design and décor of the jeep’s interior and exterior reflects the Filipino’s vibrance and extravagance – think mobile fiesta.

Like most traditional Filipino homes, jeeps have illustrations and statues of Mama Mary, Jesus or Santo Nino and even angels. Names of family members are also included in almost any available space of the jeepney.

In the provinces it is not unusual to see a crowded jeep. And when I say crowded, it means this:

If the united kingdom has a double-decker bus, the Philippines have people sitting on the jeepney roof – sans any protection as long as it has wheels. 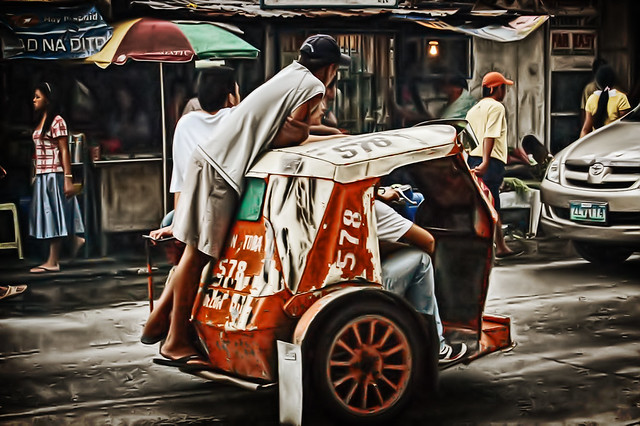 Motorcycles are cheap to buy and maintain compared to other vehicles so it is the go to for Filipinos who want to make a living by transporting people to places.

One such transportation is the tricycle or trike. Trikes roam the small streets and alleyways in the provinces and even in the city.

People in most provinces rely on the tricycle to bring them to places where bigger vehicles will not be able to pass through because of narrow spaces.

However, some cities ban tricycles in main roads because it can cause traffic and is more prone to accidents than jeepneys. 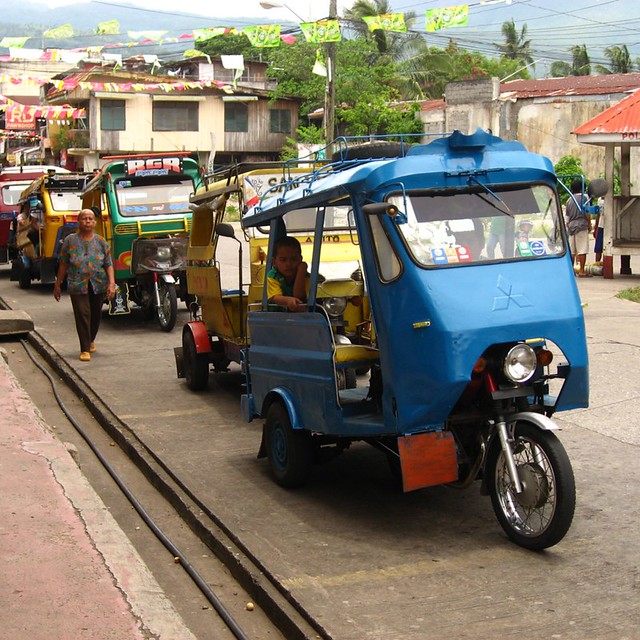 Motorela looks like a cross of the jeep and the trike. And yes, it is called motorela.

I had a chance to ride on one of these before. It did feel a little weird to ride on a longer tricycle and face other passengers like you are in a jeep. Although I guess it makes sense to create a longer body for the trike so it can hold more passengers.

Beside I’d ride motorela more than try other variations of the motorcycle here in the country.

This is really dangerous. Imagine fitting as much people on one motorcycle – it can fit more passengers than a car can.

Forget seatbelts, they do not have any protection but may be prayers.

Oh yeah, habal habal evolved to something more dangerous than a circus act – a “skylab.”

Just add planks and ropes to hold on for dear life and you can fit your entire family.

But don’t look for these in the city, the habal habal and skylab are (thankfully) mostly found in mountainous regions of the country. 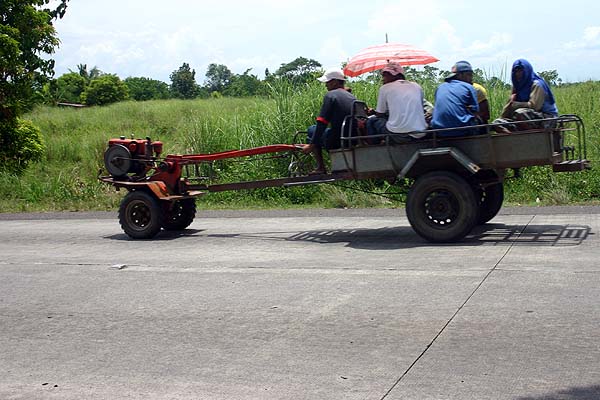 Kuliglig is a make shift transport used in some agricultural provinces in the country. It is originally a hand tractor for the rice fields but if no farmer is using it then why not drive it on the road?

Warning: walking can be faster than riding the kuliglig.

As a child, I had a chance to ride on one of these. It was fun to imagine being pulled by a cow or a carabao at first but after a while it feels like forever.

Still, I think children, tourists and even balik bayans should be able to try this rural sleigh ride. 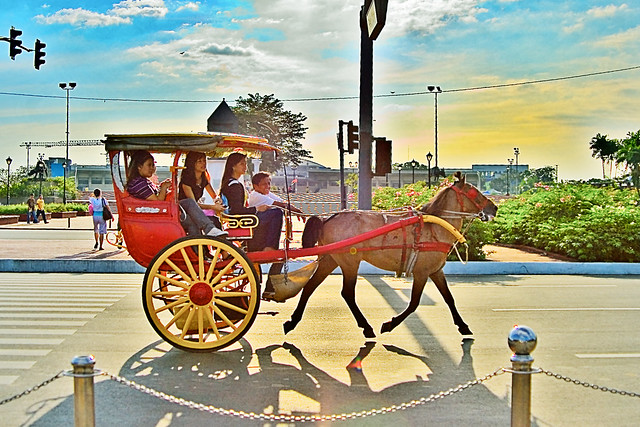 Is one of the oldest mode of transport that we inherited from the Spanish colonial times. These days the kalesa is usually found in tourist areas like Intramuros and Vigan.

It looks elegant to ride in a kalesa but make sure to ride one with a clean and healthy horse.

This is more like trike only it uses pedal power, no engines needed just legs of the person driving it.

This makes the Pedicab a zero carbon footprint vehicle and it drives slower than other modes of transport. 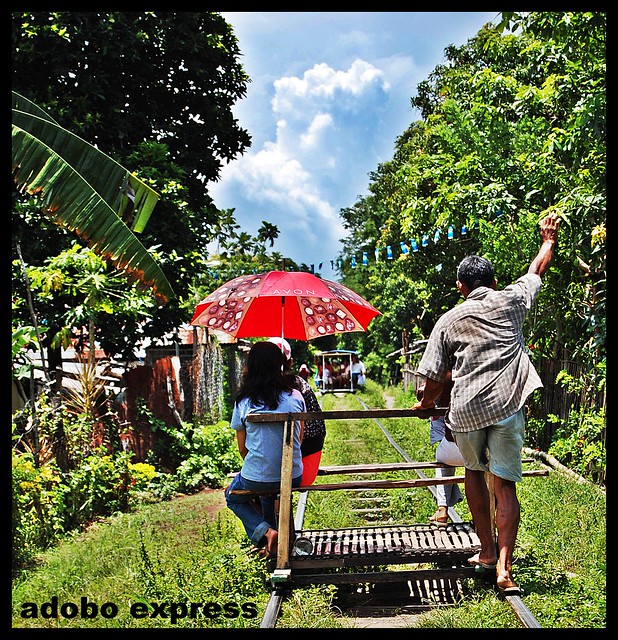 This vehicle runs on the rail road tracks. It is made of wood and/or bamboo with little wheels that are compatible with the tracks.

It is pushed by the legs of the operator and aided by a small motor.

It is fun and refreshing to ride rail trolleys in the province and have a view of the rice paddies and breathe fresh air.

However it is a little annoying to always have to go down the trolley every time another trolley is passing the other direction. The operator and other men riding will then  carry the trolley off the tracks to the side so the other one can pass.

The rule was, the trolley carrying the least number of people would always be the one to go down and make way. Of course that rule does not matter if a train is coming your way.

Palayon is a wooden scooter that people from the Ifugao regions use to help them gather wood .

They also use to race this in one of their festivals.

The traffic in Manila and neighboring provinces is a monster and roads in other provinces are not complete. Infrastructure wise, we are a long way away from developed countries. Still, Filipinos show flexibility, ingenuity and resourcefulness in dealing with the scarcity of transportation in far flung areas and lack of carefully planned urbanization.

Transportation is like a bloodline for the economy. A suffering transportation system wastes time, throws away millions of money and cripples productivity.

Hopefully, the country will be able to fix this problem while also making sure that the steps taken in the future is environment friendly and sustainable.

Special thanks to alain truchot for the main image.