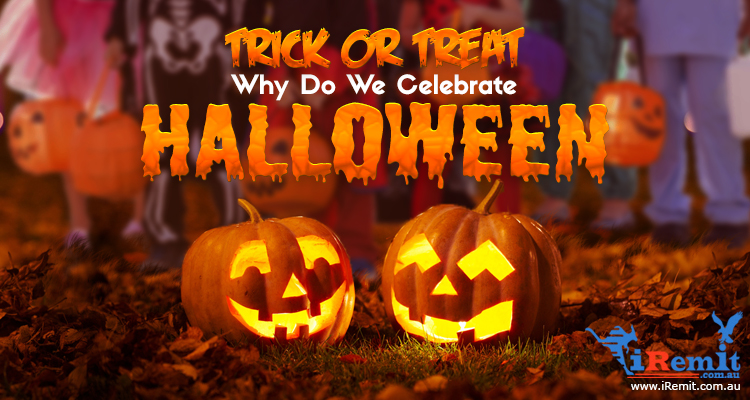 By Leandro Eclipse in Filipinos in Australia
October 30, 2017

Trick or Treat: Why Do We Celebrate Halloween?

This week is high time to be frightened with ghosts and ghouls. Why? It is because of Halloween! People will be walking the streets with costumes of terror and mischief. From celestial beings, demonic figures, to murderous clowns, it is a fun escape from reality.

But then, have you asked yourself why do we even do this, you curious cats? Well, I do! And this is the history of your favorite spooky holiday!

It All Started with the Ancient Celts

In Ireland 2000 years ago, the Ancient Celts held a festival during the end of summer months and harvest time. The Celtic Festival is called Samhain. The Celts believed that the following colder and darker months after summer is the time the souls of the dead return to the world of the living.

During this time, the people disguised themselves. They tend to wear “specter-like” clothing to deceive the spirits. They believed that the spirits would think that you are one of them.

When the Ancient Celts were conquered by the Roman Empire, the feast of Samhain was later infused with the Roman’s worship of their Gods. The celebration of Feralia, the feast commemorating the deceased, was done alongside Samhain.

For the second day, the celebration in honor of Pomona, the God of fruit and trees, was held. The apple was Pomona’s symbol. This explains the origin of bobbing for apples during Halloween.

Conversion of the Pagans

During the time of Pope Gregory III, he mandated “Hallowmas” to be celebrated on October 31 to November 2. This is a celebration where we revere the saints and pray for our departed loved ones.

The move of date was in-line with the church’s efforts to convert the pagans to Christianity. With the similarity of Samhain to the Christian Holiday, it was a tool to ease their conversion.

The eve before the Hallowmas was called All Hallow’s Eve. And later shortened to Hallowe’en, the origin of the holiday we know today.

Now that we know Halloween’s roots, another question arises. Why do kids ask for candy or chocolate during this time? What do demons and ghouls have to do with sweets?

First, it is worth to note that this custom made Halloween the second highest grossing Holiday in the world. In America alone, $6 Billion annually is spent on this holiday, only second to Christmas. As aspiring entrepreneurs, this can be a seed for a new business idea.

But going back to its origin, it can be traced to England’s “Souling” tradition. During All Soul’s Day, the poor knock on doors to beg for food and the families would give them “soul cakes” in return for praying for the giver’s deceased family members.

This tradition went with the children-centric theme today. Alongside disguising as a demon or your favorite fairy tale, this is how it evolved to the Trick or Treat we know today.

Now that you understand its history, let’s party this weekend! *Now, where is my Satan costume*