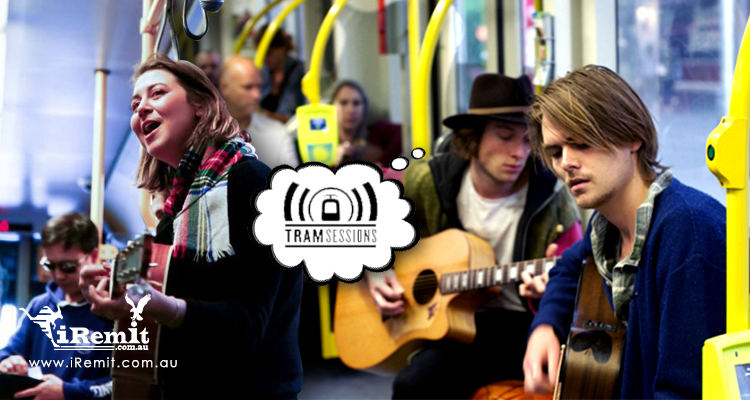 By Anna Agoncillo in Life in Australia
August 11, 2016

Fashion, arts, and music are generally engraved in the daily lives of Melburnians.

Walk around the streets of Melbourne to witness the display of trendy and hippie clothing as well as the display of international and local artworks in Australia. While its music landscape boasts with globally renowned artists and groups such as Gotye, The Living End, Hunters & Collectors, Nick Cave, Cut Copy, and Skyhooks.

To explore this vibrant music scene, Swedish expatriates Carl Malmsten and Nicklas Wallberg created the Tram Sessions. The idea for the Tram Sessions came about as the duo were trying to put two of their passions together – music and Australia’s public transportation.

All About the Tram

With an aim to bring music and culture into the public space, the non-profit organization called Tram Sessions was started in 2010. It solves the issue of not having enough venues to showcase the talents of many rising artists in Melbourne.

The organization’s premise is simple. They invite artists and bands to play a guerrilla-style performance on the Melbourne trams. Commuters are treated to a live show which is comparable to a private concert of about 20 people.

If you are fortunate enough, you can enjoy the front row seats to the likes of Vance Joy, Lisa Mitchell, Passenger, or Amanda Palmer (Dresden Dolls).

The spontaneous performances were filmed and were later uploaded to their website: tramsessions.com. This way, the budding artists and bands can be viewed by a larger audience.

You will be impressed by the neatness and crispness of the Tram Sessions’ website. The sessions are organized by years for easy navigation. You can also contact them if you want to recommend an artist or if you want to address other concerns.

Browse through the featured sessions to see how surprised and delighted the commuters were in every show. You will also realize the uniqueness of each performances. No matter how much thought was given before a performance, both the talent and the crew have no complete control of the situation. A drunk guy can easily chime in while an artist performs. It happened once and it was entertaining!

The important thing is that people are having fun.

Tram Sessions in the Philippines

If the “good vibes” of the Tram Sessions were translated to the Philippines, the people’s commuting experiences would be more pleasant. It can ease the stress and tension that the passengers feel during the long commutes.

Wouldn’t it be nice to brave the whole EDSA stretch with good music in the background?

Perhaps, you can be the successful founder of the “Jeepney Sessions” and discover the next big name in the Pinoy music scene!