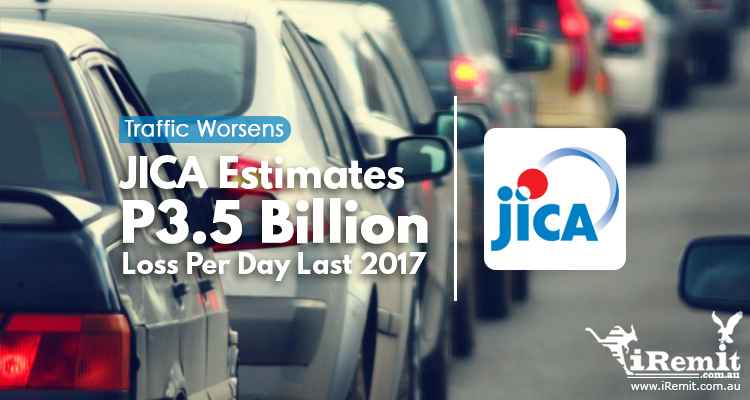 If you’re living in the Philippines, you can’t deny the worsening commute we experience every day. In a typical day, leaving at 5 AM for you 8 AM work from Cubao to Makati (roughly 10 km) is normal. On a not-so-normal day, travel times even stretch to an international flight already.

If you are wildly curious to know how a couple of sardines feel inside a can, you should try Philippines public transportation. Long lines at the MRT spanning two blocks or more. Buses with people way over their capacity. It’s an everyday nightmare for the normal Filipino.

And recent data quantified this problem. A report by the Japanese International Cooperation Agency (JICA) stated that the Philippines lose P 3.5 Billion a day because of traffic. This significantly jumped from the estimated P2.4 Billion per day last 2014.

If this continues, the daily opportunity loss will reach P 5.4 billion a day in 2035. Alongside with this, traffic costs in Bulacan, Laguna, Cavite, and Rizal are estimated at P2.3 Billion a day in 2017.

As times passes, it is expected that Metro Manila will be more congested. And the growth of these four outer regions will spike multiple gridlocks in their respective cities.

But with the approved projects in line by President Duterte’s BBB (Build, Build, Build) program, this estimate can be reduced to P 3 Billion a day and a further decrease to P 2.4 Billion a day with additional projects.

For his term, the BBB program will rollout 75 big projects in the first half to be finished in President Duterte’s term. An estimated P8 trillion will be invested in the upgrade and construction of multiple infrastructures.

For this year, 34 infrastructure projects will be launched to ease traffic congestion in the Metro as said by NEDA Director-General Ernesto Pernia. One of which is the subway project to be started in the third quarter of the year.

The Metro Manila Subway Project is the first subway in the Philippines. It will connect Mindanao Avenue in Quezon City, Food Terminal Inc. in Taguig City, to the Ninoy Aquino International Airport in a 2.3-kilometer underground railway network.

The subway will be financed by the Japanese government and is expected to be partially operational by 2022. The target completion date will be at 2025.

The government also plans to conduct job fairs abroad to entice OFWs (especially highly skilled engineers) from the Middle East to work for the BBB projects.