About a couple of months back, a travel blog’s readers voted the Filipino accent as the sexiest in Asia. (Okay, the 21st sexiest in the world, but still ahead of every other Asian country.)

And now, that same group, specifically Big 7 Travel’s 1.5 million readers, have voted us as the third sexiest in the world, period. Wicked.

The website didn’t elaborate on what “sexy” is, so all the participants based their votes on their own preferences. A total of 50 countries made the cut, with Ireland being at the bottom of the list. The United States, meanwhile, placed 45th. And while New Zealand previously topped the list as “the world’s sexiest accent,” it didn’t break into the top ten this time around, coming in at no. 23.

Singapore, surprisingly, didn’t make it to the list at all.

Which Countries Made Into the Top Ten?

Get this, the Philippines is the only Asian country that did. Big 7 Travel’s survey results for the ten sexiest nationalities are as follows:

It looks like the Danes and Ukrainians are the only nationalities that got more votes than we did. Then again, they do count Viggo Mortensen and Mila Kunis amongst them, respectively, so….. 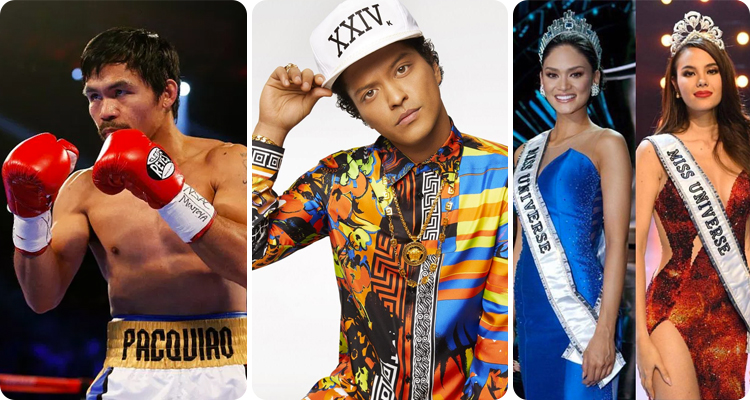 Big 7 Travel’s description of the third sexiest nationality reads, “Probably the most famous Filipino in the world, professional boxer Manny Pacquiao, along with Bruno Mars and the many Miss World participants make this a top scorer.”

Manny Pacquiao is a pro athlete, so he’s almost always in shape. Bruno Mars’ appeal, on the other hand, lies in his suave vocals, which his romantically sexy ballads show off to perfection.

No roll call of sexy Filipinos would be complete without the ladies who both nabbed the Miss Universe crown within the past five years. Pia Wurtzbach and Catriona Gray may have foreign surnames, but their features have the delicacy of pure-blooded Pinays.

As my colleague observed, foreigners can sometimes appreciate Filipinos more than their countrymen do. Here, we tend to idolize celebrities with Caucasian blood, and beat ourselves up for not having the same alabaster skin and aquiline noses that they do.

So, while this highly informal survey is frivolously amusing at best, its results are still quite refreshing. If other nationalities are quick to see and appreciate the uniquely Filipino brand of beauty, perhaps it’s high time we do the same.