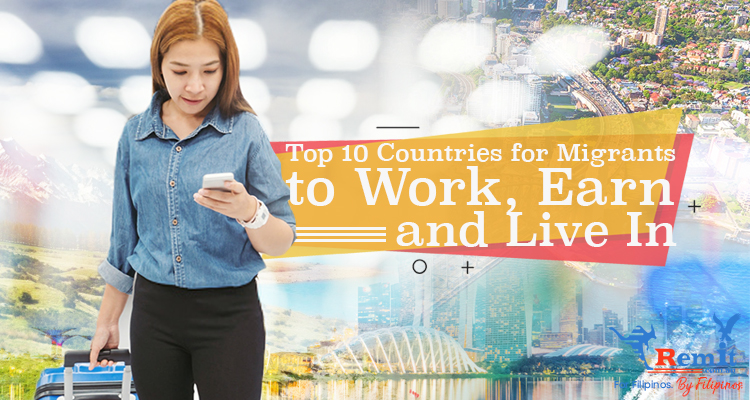 Top Ten Countries for Migrants to Work, Earn, and Live In

Why do people go abroad? The easy answer is money, especially for Filipino breadwinners and/or professionals. Not only do certain jobs (i.e., teachers, nurses, etc.) pay better in Western countries, but the exchange rate enables their earnings to go farther back home.

Still, some people choose to migrate for other reasons. Some are in search of new challenges. Others simply desire a change of scenery, or a safer environment for their kids. And then there are those who hunger for skills, knowledge, and life experiences that they can only get elsewhere.

Not too long ago, the US was every other migrant’s first choice. But their political and economic upheavals, not to mention the frequent shootings, have made prospective expats think twice.

Thus, the question every migrant faces now is, “Where should I go?”

According to last year’s HSBC’s annual Expat Explorer, which surveyed 22,318 expats about their jobs, salaries, and lives overseas, the following are the best countries for migration:

Yep, Singapore tops the list for increasing migrant earnings, specifically by an average of USD21,000. More than half of the survey participants also confirmed that their new jobs paid better abroad. About half, meanwhile, even claimed that they paid less taxes.

However, while the Southeast Asian city-state is the most popular country for expats, Switzerland apparently offers the biggest salary boost. Here, an expat or migrant can earn an average of USD203,000 annually, which is almost twice the global average.

Beyond $$$’s: Other Factors That Make Migrants Stay

As we’ve established, money isn’t the only incentive for most people. Switzerland, for instance, is one of the most expensive places to live on the planet, particularly its cities of Zurich and Geneva.

And yet, those who chose to make a new start here cite its political and economic security as one of their reasons for staying. Only 1% of the respondents in Switzerland say they are concerned about the local economy. In addition, only 9% expressed anxiety about their financial future.

Similarly, Singapore presents a high cost of living, but migrants there appreciate the quality of life it offers their families. Over 60% of the expat parents say that their children’s health and well-being are better there than at home.

Australia, as seen above, is very much in the top ten. Thus, it’s probably a good decision to set your sights Down Under if you’re planning to move abroad.

As with any major life decisions, however, do plan your moves very thoroughly. A good head start, after all, can make a world of a difference in your experiences overseas, regardless of where you choose to go.