Top 7 Cities for Business in the Philippines

The Philippines have 7 cities on the list of top cities around the world ready for business process outsourcing or BPO.   These cities are groomed to receive businesses from the US, UK, Canada and Australia. Australia even has the time zone advantage, there is only a little time difference between Australia and the Philippines.   So hiring remotely, you do not need to think about night differential pay (US accounts pay additional because their employees work at night to match the US time zone).   Of course these cities may pale compared to cities in developed countries, however, businesses wise, employers are sure to find: skilled and industrious people, solid infrastructure and sufficient internet connectivity, and lower operational cost.   If you are planning to outsource your business or hire just a few people to work for you remotely, consider visiting these places to get an idea of how things are here and get a chance to relax as well.   These cities are:   Metro Manila also known as the National Capital Region (NCR) located in the island of Luzon. It earned the number 2 spot in the Tholons Top 100 Outsourcing Destinations 2015.

Metro Manila has long been the hub for businesses in the country. Makati, Ortigas, Bonifacio Global City in Taguig, Alabang and Eastwood in Quezon City are all filled with BPO offices. It is likely to meet a lot of people who are very experienced and knowledgeable in the business around these areas who might be able to help you set up your own.   Along with the boom of BPOs in these places are different establishments like banks, restaurants and malls that will surely liven up your stay and make life more convenient. Concerts and other events of interests are also common in these places.   Also, do not be afraid to go around, most, if not all signs in the area are in English (some restaurants and establishments have signs in Chinese or Korean). If you did not arrange for your own transportation there’s uber and grab taxi so you do not have to flag down cabs on the streets (although you can still do that).   These places are not really far away from each other but traffic may get really bad going around these areas so if you do plan to visit different places, plan ahead of time so you do not get stuck in traffic.   Besides you can stay in one of the major business hubs for the whole day and go to another the next day instead of trying to hop on every place in a day – there are quite a lot of things you can do in one place anyway.   Metro Cebu is the second biggest city in the list and is positioned at number 8 of the Tholons list.

Cebu is found in the Visayas, one of the many big islands in the Philippines. Cebu has a land area 4.8 times bigger than Hong Kong and 7.8 times bigger than Singapore. 90 percent of Metro Cebu’s population are in industry and service jobs.   Cebu is a just over an hour away from Manila by plane but unlike Manila, people in Cebu are usually better speakers of English than Filipino (Tagalog). They have their own language, the Cebuano.   Cebu is less dense in terms of population compared to Manila so if you do not like the volume of people in Metro Manila, then you might consider Cebu instead.   They also have their own airport and seaport enabling a healthy tourism industry since 1970s. Other public transportation projects are being planned or under construction to complement and further expand the BPO industries here. Present in Cebu are different export processing zones and Philippine Export Zone Authority or PEZA-registered business areas like the IT Park and Cebu Business Park.   Davao City in Mindanao is found in the south of the Philippines and is the largest city on the list.

Davao’s land area is massive compared to the first two cities however it is not as urbanized as the first two. This up and coming destination is at number 69 on the Tholons list.   Majority of the people in Davao also speak Cebuano and English while only a minority speaks Tagalog and other Ethnic dialects.   Davao is also relatively safe compared to its neighbouring provinces in the South. It has its own economic zone and a good business climate. In fact, KMC Mag Group notes that Asiaweek tagged Davao as one of the top 20 most livable cities in Asia and the most livable in the Philippines. Furthermore, back in 2002, it was named as the Most Competitive City to DO Business with by AIM Policy Center and the Department of Trade and Industries.   However, some of the challenges that it faces is the power outage and the stigma of the conflicts present in most provinces in Mindanao.   Next on the list is Sta. Rosa, Laguna at number 82.   Another metropolitan in Luzon just 33.9km away from Makati via the Metro Manila Skyway.   Sta. Rosa is most famously known for Enchanted Kingdom, a local amusement park that is probably one of the best in the country. Exiting the expressway going to south Luzon provinces, there is a chance you’d glimpse the Ferris wheel.   It also houses 4 major car assemblers (Toyota, Nissan, Honda and Ford) making Sta. Rosa the Motor City. So if you are in this industry and you want to outsource some of your business processes here, you may find the best talents with the right skill and knowledge here. It also happens to be the ICT hub for all of region IV-A (these are the provinces of Cavite, Laguna, Batangas, Rizal and Quezon).

This province is also the headquarters of international brands such as Coca Cola and Monde Nissin Corp.   Although most people in Luzon flock Metro Manila, Sta. Rosa has a lot of housing projects and you can be sure it has a good sized talent pool. You might even be tempted to buy your house here with high end communities like Eton City, Greenfield City, and Nuvali.   Other PEZA-registered industrialize estates are Laguna Techno Park Inc., Greenfield Auto Park, Sta. Rosa IT park, and Toyota Special Economic Zone.   If you feel like relaxing, you can always drop by Sta. Elena Golf Club.   Jumping seven spots on the Tholons list is Bacolod City at number 86.   Found in Negros Occidental in Visayas, Bacolod is an hour and a half plane ride from Manila. 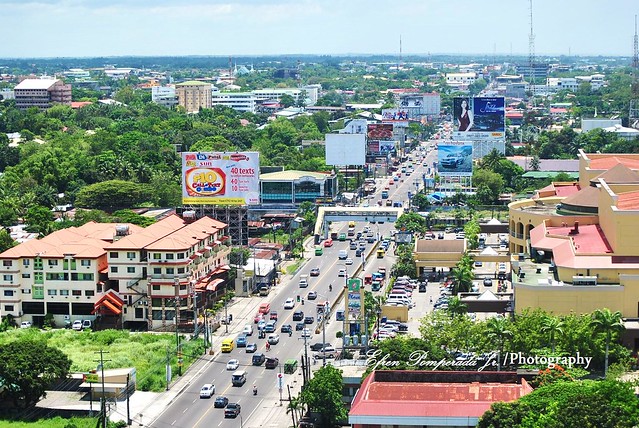 For the longest time, Bacolod’s major economy is the sugar industry. There is more to smile about as the city is an up and comer in the BPO industry, Bacolod is a highly urbanized locale awarded by Money Sense Magazine as the Best Place to Live in the Philippines in 2008 and given the “center for excellence award” by the Department of Science and Technology for its IT and business process management operations.   Real estate tycoons Megaworld and Ayala land are also looking into developing the said province.   Up 4 notches on the list is Baguio City at number 95.

Clark is almost the same size as Singapore and is fast becoming a hub for businesses, aviation and tourism because of its proximity to most Asian countries – only 3 ½ hours away, highly improved road network and its own international airport.   If you decide to set up business here you will be joining other businesses like Cybercity Teleservices, Expert Global Solutions, iQor Philippines, Aero Park Campus with Kuwait’s KGL Investment company, Australia’s Beepo to name some.   Several land developments are being initiated and are underway – all to invite more BPO to invest here.   A balanced lifestyle is achievable here with malls and duty free stores, fine dining, bars and restaurants found almost everywhere.   They also have world-class golf courses at the Mimosa and Fontana resorts. You won’t run out of spas and hotel rooms here either – unless may be if you are one of the spectators of the annual Hot Air Balloon Fiesta.   If you want something more daring try sky diving, off-road driving and aerial tour of Mt Pinatubo.   Local and foreign real estate investors are also invited to bid for the Clark Green City plan to convert the former military base into a “liveable, green and intelligent city.”   Other places to watch out for are Antipolo, Cavite, Cubao, Lipa, Malolos, Muntinlupa, Naga, Pasay and other parts of Quezon City.   If you are planning to outsource but you do not have the time to visit the country or hire on your own, there are several agencies that can do that for you. They can do all of the HR side for you including the payroll.   So go ahead and try it out. Who knows, you might meet the perfect person to meet your vacancy need.   Special thanks to Wikimedia Commons for the main image.