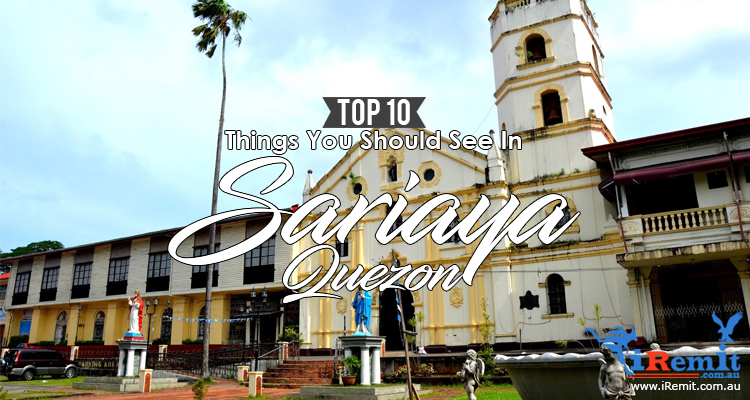 By Candice C in Traveling to the Philippines
October 2, 2015

Top 10 Things You Should See In Sariaya, Quezon

Sariaya is a quiet old colonial town 300 plus years old. Most of the people here either work in offices outside of town or have their own businesses.

Going here is a short 3 to 4-hour bus ride from Manila (it is only 132.4 km away). It is the third town you reach the moment you are welcomed by the arc of Quezon Province.

Some people may just pass by this town while going to more popular towns like Tayabas, Lucban and Lucena City. However, if you are looking for a quiet place to go without totally disconnecting yourself from needed amenities then you might just fall in love with Sariaya.

The church in the middle of the town was not the original church built when the Spaniards first settled in the area in 1599. The current St. Francis of Assisi church standing now is built in 1748.

The church houses an image of Sto.Cristo de Burgos. They say that it was with the church built in Lumangbayan in 1703. After several natural calamities and an attack by the Moros, the friars decided to move the church again.

According to folklore, Santo Cristo de Burgos chose its present site. They say that the men carrying the image rested under a tree and when it was time to move, they cannot anymore lift the image. They took this as a sign and built the church on the same site.

People in town believed that Santo Cristo de Burgos hid the church and neighboring houses under a thick cloud protecting it from bombers.

According to legend, seafarers used to tie their ships and bancas on the big acacia tree in front of the church. They say that the shoreline then was much closer to where the church is standing now. They say if you look at the soil near the church and other areas closely, there are still some sediment of shells and dead corals.

The acacia tree underwent surgery a few years back because parts of it were rotting out of old age.

Mt. Banahaw serves as a serene and gentle backdrop of the whole town. Older citizens swear that it was not always that way. Mt. Banahaw once erupted or caused big rocks to slide down the mountain causing devastation.

Colonial Houses dot the town and are present in almost every turn. Some houses have care takers while some convert a part of the house and turned into commercial area.

There is one peculiar house near the town’s plaza, which they say was haunted. No one renting it can stay for too long; either scared out of wits or suffered losses.

Putting those haunting rumors aside, these houses reflected the glory days of the town when coconut was a booming industry during pre-war years.

These houses are witness to the grand lifestyle that their inhabitants had including friars, political meetings with a president and other prominent figures, the Japanese invasion and guerilla attacks.

Neighboring towns and provinces know that Sariaya is the place to visit if you are ever in need of beautifully made gowns – for weddings, debut, parties, JS prom and Flores de Nayo parades. Sariaya houses most of locally celebrated designers who won different awards for their creative fashion.

Some shops and designers you may want to visit in person or through Facebook page are:

Most of the gown shoppes are found in the Public Market area.

If you find yourself hungry while going around town, either you are bound “ilaya” (north) of the church or “ibaba” (south) you may visit:

Treat House – Is near the Municipal hall, beside a small hospital. They are famous for their Hotcha dried noodles and food for the gods.

If you want to take a quick dip in the pool and eat some delicious food, try Plaza de Shalom. This is near the Municipal hall across the old cinema.

If you are closer to “ilaya” try Casa Plaza this place offer good food for dine or take out and they even cater to big occasions.

You can also book a good room a few steps out of town proper at:

Balai Sadyaya – this place is grandiose and is slowly becoming the place in town to book weddings and receptions.

In the outskirts of town are other resorts:

Oyayi Farm and Resort is a private resort. You would have to book and reserve days ahead of time. The best thing about this place aside from being away from the crowd is the lemon scented pool.

It is always best to buy your pasalubong (food and other items you want to bring home) in local stores than buy them from vendors on the streets or bus.

Bread and pastillas are easiest to bring home as pasalubong. There are different stores around that offer these but you may want to look for these names:

Cadiz bakery especially for the famous “pinagong.” These are turtle-looking bread that are hard on the outside but soft and creamy on the inside.

You may also try bakeries by Villamater, Villadiego and Mortilla bakery.

Tamales making is part of tradition in Sariaya. It ‘s like lunch to go wrapped in banana leaves. This delicacy is made of ground rice topped with meat and boiled or salted egg. Try one from Kalye Tamales.

Quezon is famous for this dried noodle recipe topped with sautéed vegetables, chorizo and quail eggs served on banana leaf. It tastes even better with vinegar. It got its name from how the dish is eaten. The word “habhab” in Filipino means you eat it directly from the banana leaf using your mouth sans spoon and fork.

This colorless beverage packs 40 to 45 percent alcohol. It is made from fermented sap of the coconut tree. Some Lambanog stores now offers colored and flavored versions.

This pastry is originally from Tayabas, another town in Quezon. It is the craze right now and is selling like hotcakes. You might want to ask a friend who lives in town to buy one for you or drop by the store and order/reserve.

This famous pasalubong is originally from Lucban, another Quezon town. These are small, red sausages that have a rich garlic flavor. Be wary of those selling Longanisang lucban that filled the sausages mainly with red food coloring.

During pre-war times, Sariaya town folk were rich, flamboyant and they like to throw parties. This they say is why the town has at least 3 fiestas that they celebrate until now.

May 15 Feast of San Isidro Labrador

Every agricultural province celebrates the feast of San Isidro Labrador to thank the patron saint for good harvest.

Unlike Lucban, Quezon who is famous for its Pahiyas festival. Sariaya has an Agawan Festival. Participating houses and buildings are decorated extravagantly but they are not just for display. These products are given (sometimes thrown) to the people after the parade or the judges pass by. Before the end of the day, the top 3 winning designs are awarded.

If you want to visit and see the Agawan festival, come at least a day before. Traffic is bad on the 15th because all other towns and provinces are having their own celebrations as well.

According to oral tradition, September 14 marks the arrival of the image of Santo Cristo de Burgos in the town.

The streets of the town are usually lined with night markets selling items like food, clothing, toys and house hold items.

The town’s church is named after St. Francis of Assisi so naturally, we celebrate his feast day too. However, the Parish usually celebrate this in a simple manner probably because that is one of St. Francis’ doctrines.

A Franciscan Missionary of Mary convent is also established a few minutes out of town proper.

Parades and pageants are also something to look forward to if you visit the town around feast days.

Flores de Mayo is a religious observation and in Sariaya, usually an extravagant occasion that showcase the religious side of the town folk and a display of their creativity as gowns, make up artisty and parade arcs pass the streets.

To join the celebrations and promote tourism, the town started an annual search for male and female youth who represent the people of Sariaya through Figuras. This is more than a pageant as it also supports the thriving gown shop business as well.

Whether you are someone who enjoys historical churches and houses, a fashionista, a foodie or you just want to relax near a pool or a beach, something of everything awaits you in Sariaya, Quezon.