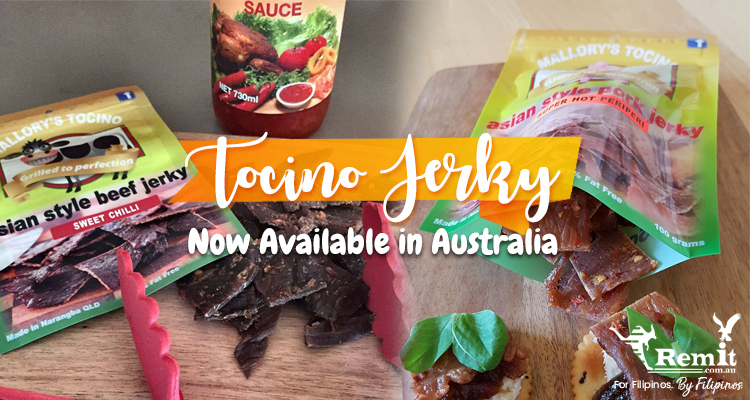 By Serena Estrella in Filipinos in Australia
October 25, 2019

Tocino jerky? Well, why not? There is tocino-flavored SPAM, after all.

Clueless? Okay, let’s start by defining those two terms. In the Philippines, tocino is a popular breakfast viand. It’s basically sliced pork belly that’s been cured with an anise wine-sugar mixture, resulting in a sweet-savory flavor. Jerky, on the other hand, pertains to trim, dehydrated beef strips. It’s a mainstay in military rations thanks to its long shelf-life, but it’s also a popular bar snack among Aussies.

And now, an enterprising Filipino migrant has come up with a delightful hybrid.

Lory Sandilands originally hailed from Cebu, Philippines. Her family’s tapa business, which has been around since the 1970’s, introduced her to the process of drying and grilling meat.

After migrating to Queensland twenty years ago, she and her husband Malcolm thought of tweaking her family’s recipe to suit Aussie palates. Hence, they started making their tocino jerky for family and friends. Not long after that, they branched out to Brisbane’s local weekend markets and sold their jerky under the brand, “Malcolm and Lory’s Tocino.”

The couple received their QLD Safe Food Accreditation back in 2014. Eventually, they included beef and chicken jerky into their product line. They also changed their brand name to “Mallory’s Tocino” as a nod to their joint efforts.

Today, Mallory’s jerky comes in a variety of flavors, but each one is made with 100% Australian-grown chicken, pork, and beef. Apart from being quite tasty, the jerky is also a healthier snacking alternative, thanks to its high-protein and low-fat content.

Here’s Where You Can Try It

Lory and Malcolm Sandilands still actively man their stalls at the Brisbane and Sunshine weekend coast markets. They feature in Southeast Queensland’s various events and festivals too.

However, thanks to the public’s warm reception of their product, Mallory’s Tocino is now available in several supermarkets, convenience stores, bottle shops, and petrol stations. If you prefer to do your shopping online, you can buy from their website. Purchasing at least 10 100-g packs of jerky will merit you free shipping, with prices starting at AU$12 per pack.

Lastly, if you’re interested in buying their products at wholesale price, either for your personal consumption (!) or for reselling purposes, they are open to inquiries. Simply message Mallory’s Tocino on Facebook or contact them via  0421 323 245 or 0435 539 756.