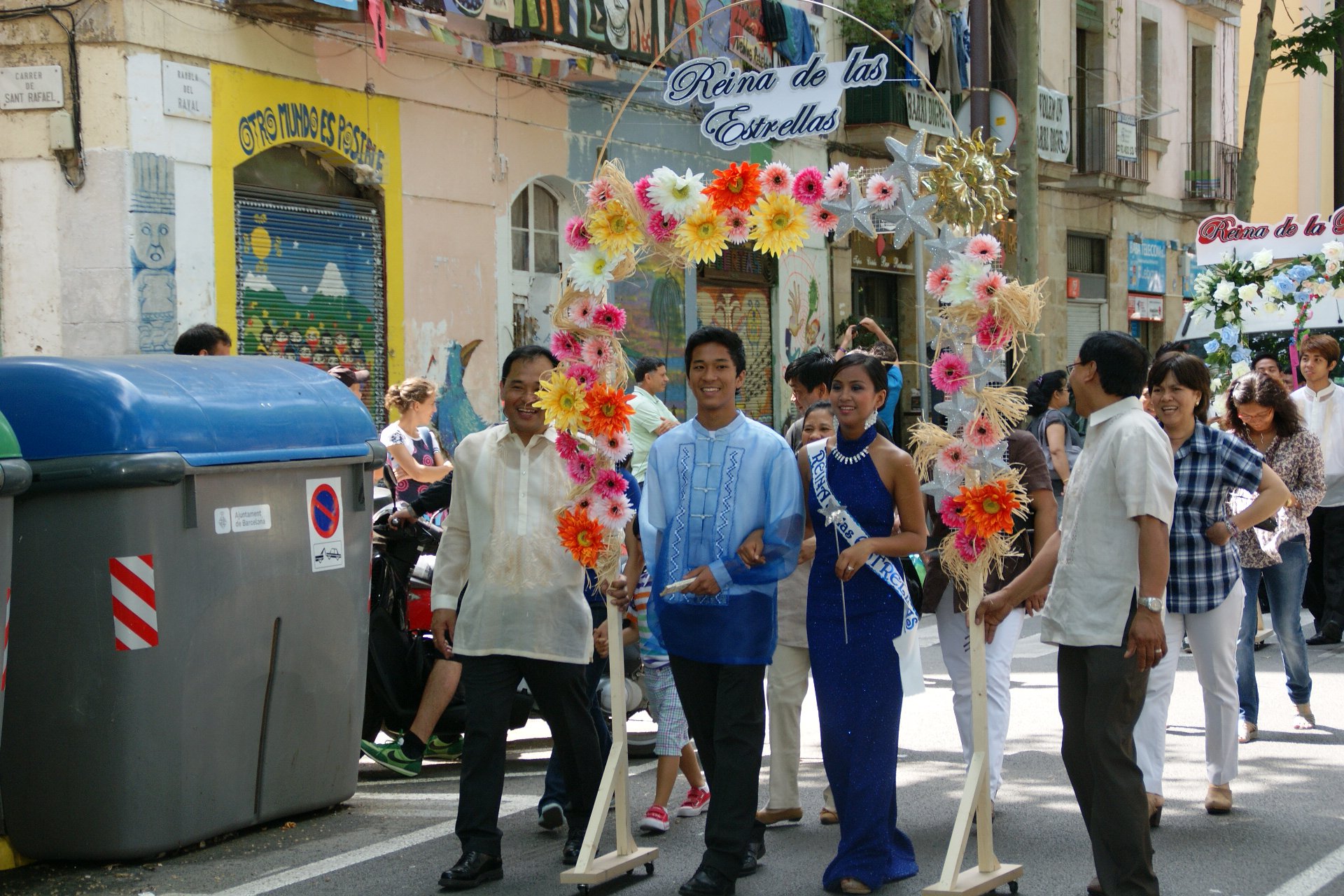 In the Philippines the month of May is synonymous to the Santacruzan.   Every year, Hermana mayors or any person/group in charge of the Flores de Mayo in each town scout for the town belles (local or vacationing balikbayans) to join the annual parade.   Indeed, there is no place as beautiful and grand as the towns in the Philippines the whole month of May. Houses, town buildings and common public areas are decorated with flowers and even agricultural products – no one can miss the festivities.   Unfortunately, the religious, historical and cultural value of the Santacruzan is being reduced to a flamboyant beauty pageant that lacked the meaning and significance of each character in the parade.   So, what are the titles of the beautiful maidens really about?   Reyna Banderada represents the coming of Christianity in the Philippines. She should be represented by a young lady in red holding a yellow triangular flag.   Reyna Mora is a representation of the Muslim people in the Philippines before the Spanish colonial era.

Queens of the Catholic Virtues

Hero Queens and other Biblical Figures

Reyna Judith is a real historical figure from Bethulia. She saved her city by beheading General Holofernes of Assyria. During the parade, the queen traditionally carries with her the General’s head on one hand and a sword on the other.   Reyna Sheba is a biblical figure whose records showed up during the time of King Solomon. According to the bible, Sheba visited the famous king and was overwhelmed by his wisdom, power and riches. She holds a jewelry box during the Sta Cruzan.   Reyna Esther is another hero parading with the beauties during May festivities. She is a biblical Jew who saved her people by intervening with King Xeres. You can spot her in the crowd carrying a scepter.

Samaritana is the woman from the new testament of the bible whom Jesus spoke to at the well. Of course, she carries on her shoulder, a water jug.   Veronica brings with her the cloth with the imprinted faces of Jesus. According to the New Testament, Veronica met Jesus while he carries the cross. Veronica wiped the Lord’s face with a cloth that became printed with three faces of Jesus.   Tres Marias holds the 3 unique attributes associated with the Entombment of Christ. They are Mary of Magdala or Mary Magdalene, Maria de Cleofas and The Blessed Virgin Mary.   Mary of Magdala carries a bottle of perfume while Maria de Cleofas the mother of James holds the bottle of oil. Lastly, Mary, Mother of Jesus holds a handkerchief for mourning.

Titles are from the Litany of Loreto. Here are some of them:   Reyna Abogada is the one who traditionally wears a black graduation gown and cap while holding a big book. As the title suggests, this queen is the defender of the poor and the oppressed.   Reyna Justicia carries a weighing scale and a cross as the “mirror of justice.”   Reyna de los Angeles is accompanied by little angels and carrying a bouquet of white flowers.   Reyna de la Estrellas may remind one of a fairy as this queen rocks a wand with a star.   Reyna del Santisimo Rosario carries a large rosary.

Reyna Luna brings” the moon as the footstool of Mary as the Woman of Apocalypse.”   Reyna Sentenciada probably needs the help of Reyna Abogada. You can spot her as the one with hands bound by a rope, symbolizing innocents wrongly accused.   Rosa Mystika is the representation of the mystical rose. She carries a bouquet of roses.   Reyna de las Flores brings a bouquet of flowers as the queen of the Flores de Mayo.   Reyna Emperatriz is the representation of Saint Helena of Canstantinople as an empress or Queen Mother.   Reyna Elena is usually the last member in the parade holding the cross. She is the representation of Saint Helena who started it all. According to records, she was the one who searched for the true cross of Jesus.   Being the Reyna Elena is a prestigious role assigned to the most beautiful or most important patron in the community.   Cute little girls are also invited to join the procession carrying the letters A-V-E-M-A-R-I-A while wearing angel costumes.   The Flores de Mayo and Santacruzan is a Spanish influence in the Philippines and through the years the Filipino embraced the tradition as their own brining the colorful procession and festivities wherever they are in the world.   Special thanks to Ang Bagong Filipino for the main image.