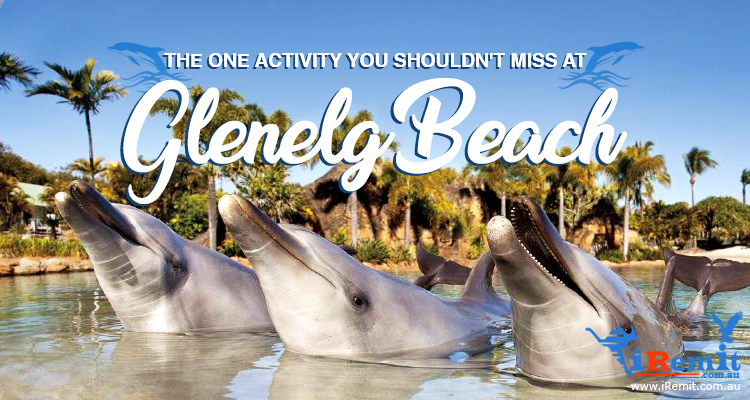 By Serena Estrella in Life in Australia
April 10, 2017

The One Activity You Shouldn’t Miss at Glenelg Beach

Australia is famed for its beaches (as is the Philippines, come to think of it). Bondi Beach is probably up there on many travelers’ “Places to Be” lists, but Adelaide’s Glenelg Beach has something that you wouldn’t want to miss out on either.

Dolphins are fascinating creatures. Intelligent and friendly, they have charmed the imagination of many a human being for years, and because the waters surrounding the Adelaide coast is teeming with hundreds of common and bottlenose dolphins, you get the chance to swim or even play with them at Glenelg Beach.

There are a few companies that facilitate the Swimming with the Dolphins experience, and they typically let you ride a catamaran that coasts along to where these delightful creatures hang out. Since the dolphins themselves determine how the activity unfolds (e.g. the boats don’t chase and harass dolphins, the marine animals are not lured to the vessel with handouts, etc.), you won’t get to play with them if they don’t feel like it. There is, however, a 100% chance that you will see a dolphin and be in the same spot as at least one of them.

There are many other great things about Swimming with the Dolphins at Glenelg Beach. For one, you don’t need to be a seasoned diver or snorkeler to join. Because you will be will be wearing a flotation suit and hanging onto a flotation line, even those who don’t know how to swim can join in!

Catamarans assigned to this activity depart daily from November to March, and from August to October every 7:45 am from the Holdfast Shores Marina on Glenelg. The activity is typically done by 11:30 am, so you’ll have half the day to do with as you please. As an added bonus, the early morning light is best for selfies with your new dolphin pals, so don’t forget to bring your GoPro along.

The best companies also provide you with wetsuits, masks, and snorkeling equipment. You need only to bring your towel, sunscreen, hat (you’ll want one during the Australian summer), and of course, a camera. Prior to sailing, you’ll be briefed on what not to do to ensure a smooth experience. The crew manning these boats are knowledgeable, experienced, and incredibly helpful, so you’ll be in very good hands.

Terrified of unexpected shark attacks? Fear not, for the perimeters of your swimming area are fitted with Shark Shields. These patented deterrents create a protective electronic field around the participants, allowing you to interact with the dolphins in a worry-free manner.

Best of all, unlike those ocean parks or dolphin shows which often maltreat dolphins, seasoned operators behave with a great deal of respect towards these gentle creatures. The catamarans are guided through dolphin pods and the marine mammals are given the chance to engage. If they swim away, the boat simply moves on to the next pod of dolphins and so on, until they find one that’s in the mood to play. Part of the proceeds from this activity even go to the Adelaide Coastal Dolphin Research so that scientists can come up with better ways to conserve the creatures’ natural habitats.

If nothing else, Swimming with the Dolphins makes for a once-in-a-lifetime experience, and if you’re lucky enough to go on a session, the memories of a morning spent among these charming beings are likely to stay with you for years to come.