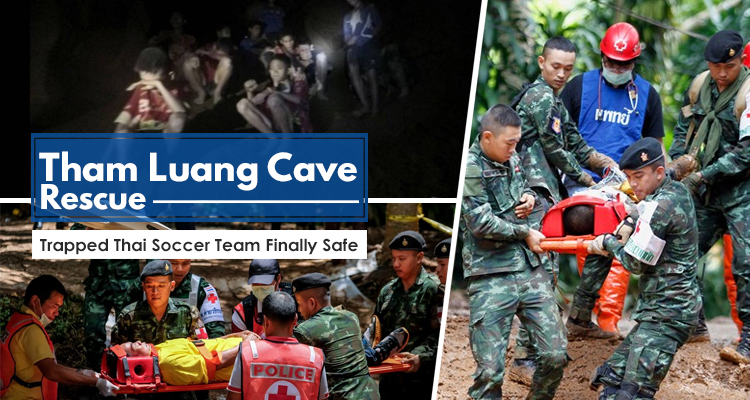 Let’s take a break from all the negativity and relish the safety of our brethren. After a total of 17 excruciating days, the 12 Thai students and their coach stuck in Tham Luang Cave (Great Cave of the Sleeping Lady) are finally rescued. #Hooray for Humanity.

If you haven’t heard already, the Wild Boar football team of Moo Pa Academy got trapped in the perilous cave last June 23, 2018. What’s supposed to be an excursion turned to a horrific accident. Leaving them stranded inside the deep recesses of Tham Luang.

They went to the cave to celebrate the birthday of one of the players during dry weather. But the monsoon caught them by surprise. The torrential rains flooded the cave. Their only means of survival? Move deeper and look for higher ground.

With only 10 square meters of living space, their coach and former Buddhist monk, Ekapol Chantawong, managed to keep them alive for 10 straight days amidst depleting food sources (they brought food from the planned celebration), drinking murky water, and almost pitch black darkness.

He thought them meditation practices to keep their anxieties in check. He sacrificed eating to supply the kids with enough food source. But how long can they last? As a whole, the situation seems to be hopeless.

A Glimmer of Light

Image Credit: Thai PBSThey Were Rescued Just in the Nick of Time

The local police only knew about their disappearance when the mother of one of the boys reported her missing son. Upon investigation, the police discovered the bicycles and shoes of the team near the entrance of the cave.

The Thai Navy SEAL went in only to be stopped by the difficult maneuvering required to move further. The terrain was too narrow for normal oxygen tanks and the flooding made it more difficult even for seasoned cave divers. What’s the possibility that these kids will survive?

But the Thai Navy Seals with the help of professional cave divers around the world didn’t give up. They drained the water from the cave using industry standard pumps on the next days.

With the relatively manageable waters, on July 2, 2018, the British divers Stanton and Volanthen found the boys with the supervision of Harper from the outside.

They were given “easy-to-digest, high-energy food with vitamins and minerals, under the supervision of a doctor,” said Rear Adm Arpakorn Yuukongkaew.

But the next problem arises, what do we do next?

The circumstances of the rescue are harder than expected. Should they teach the kids how to scuba dive to safety? Should they wait for the rains to stop for the waters to eventually ferry them outside? It’s better to stay for a month in the cave than to try going out now but perish. The plan of action might spell the eventual death of the victims.

It’s even complicated that the navy seal Saman Kunan died because of a miscalculation in oxygen supplies while transporting supplies. Most of the children don’t know how to swim. If a navy seal is even at threat, is this operation even possible?

Not to mention, the oxygen levels in the cave is getting lower by the second. And to make things even worse, weather forecasts rainfall to flood the cave until October.

There is no other way but to get them out now and as fast as possible.

They Were Rescued Just in the Nick of Time

It’s the collaborative effort of so many people. For this impossible mission, the stars have to align perfectly to pull this off. Their only window? Just in the next four days (July 8 to 11) before the severe downpour.

The rescue time came. The kids were transported using red stretchers strapped with full-faced oxygen masks. As a precaution, the victims were heavily sedated to avoid panic and anxiety. They were carried by two divers carefully through the impassable murky waters taking 10-20 hours. One wrong move will be surely fatal.

It took three intense rescue missions to finally extract the team from the cave. Gregarious applause resonated with everyone. We just made the impossible possible.

After a few hours, the pumps suddenly malfunctioned and significantly rose the water levels to head height. The remaining 100 workers inside frantically rushed to the exit.

We are blessed. With an average rescue time of 10-20 hours, imagine the casualties if they were delayed for a few minutes. Timing is key. Everyone was safe just in the nick of time.

The boys are now recovering from the traumatic experience. Everyone was brought by a chopper to a hospital 45 miles from the cave. On average, each one lost 2 kilograms but they have no signs of stress (Even posing victory gestures).

The FIFA confirmed flying the team to the World Cup. But the doctors advised against it. Currently, they are recuperating under observation for infections and respiratory problems. But their heroes, Manchester United, invited them to the Old Trafford next season.

Faith in humanity restored. This cannot be done without every single one’s contribution. To the leadership and resilience of the kids, to the expertise of the cave divers and Australian Doctor diver Dr. Harris, to the only kid that can communicate in English. It’s like a rigid deck of cards stacked on each other. But this time, it seems rock solid.

Westerners, Asians, this event transcends the barriers of race. I hope this continues to be a trend in our society. Can you imagine the things we can do? A great image indeed.