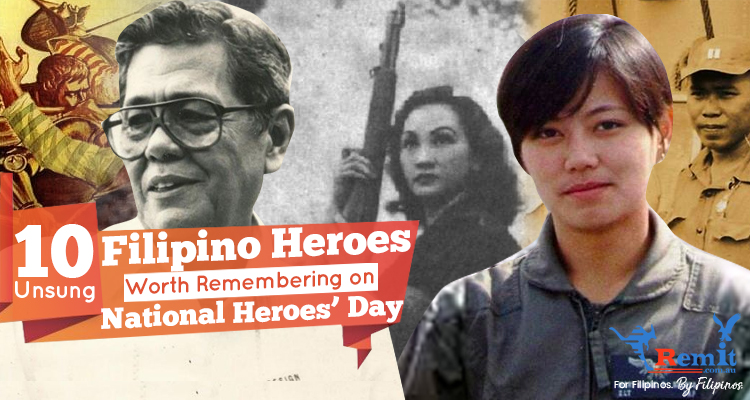 August is a great month for nationalistic sentiments, it seems. The eighth month of the year isn’t just Buwan ng Wika or National Language Month. It also happens to honor historical stalwarts like Manuel L. Quezon and Ninoy Aquino. And if that wasn’t enough, today, 26 August, is National Heroes’ Day.

Now, we’re all familiar with the pantheon of Filipino heroes. Yet, for every Rizal, Bonifacio, and Mabini, there are at least ten other Filipinos and Filipinas who’ve done just as much (if not more) for the nation. A lot of them, unfortunately, remain unnamed, but there are a handful whom we can choose to focus on today:

The Visayan Joan of Arc was a legend, and it’s quite a shame that her name doesn’t grace our history books as often as her male counterparts do.

Magbanua was born in 1863, and had quite an unconventional education for her time. Rather than a home economics course, she took up teaching. Magbanua even qualified as a Maestra Titulada Superior at the University of Sto. Tomas later on.

Despite her educational attainment, she also volunteered to enlist in the revolutionary army when her two younger brothers did. As an expert marksman, Magbanua eventually gained command of a bolo battalion. “Nay Isa,” as she became known, was the only woman to do so in Visayas during the revolution.

This revolutionary heroine’s origin story is as unlikely as they come. As the daughter of a provincial mayor, Remedios Paraiso-Gomez was free to indulge her interests in fashion. She even won a beauty pageant in her youth.

Things quickly changed when the Japanese invaders tortured and killed Remedios’ father. To avenge his death, the free-spirited maiden joined the Hukbalahap or the anti-Japanese army and rose up the ranks as one of its highest-ranking commanders.

Kumander Liwayway’s refusal to downplay her femininity also made her stand out. Her soldiers would often see her on the battlefield with neatly-combed hair and bright red lipstick. Anyone who had issues with this would be challenged to a duel, and the BAMF commander always ended up proving that she was so much more than just a pretty face.

We know her as one of the three heads that appear on everyone’s favorite birthday gift: the Php1,000 bill.

Yet Josefa Llanes Escoda’s contributions to her country were priceless. Apart from founding the Girl Scouts of the Philippines, the Filipina Florence Nightingale also organized women to help out with the war effort. They usually rendered emergency services to war casualties, gave food to the soldiers on the front lines, and even couriered messages between prisoners and their families.

The Japanese initially allowed Josefa to go about her regular activities, but they imprisoned her shortly after they caught her husband in Mindoro. After months of torture and interrogations, the Japanese executed the couple a few days before forces liberated Manila.

Interestingly, Diokno’s integrity was more than a match for his formidable intellect. As the erstwhile Secretary of Justice, he investigated an American businessman for tax evasion. When then-President Macapagal ordered him to absolve the offending party in exchange for deportation, Diokno refused and resigned.

The same thing happened when Diokno became a Senator in the early 1970’s. The illustrious lawyer disagreed with President Ferdinand Marcos’ policies, especially the suspension of the writ of habeas corpus. Like many Marcos dissidents, Diokno spent time in prison during the Martial Law years.

Once he got out, he set up a Free Legal Assistance Group (FLAG) for Martial Law victims. To date, it is the biggest association of human rights lawyers in the Philippines.

The rugged, long-haired revolutionary was once a stage actor for Moro-Moro plays. After he joined the Katipunan in 1894, he used his profession as a cover for recruiting people from different towns.

Sakay fought alongside Bonifacio, and against both the Spaniards and Americans in his lifetime. During the Philippine-American War, he used guerilla tactics against the Americans and kept to the mountains. He actually grew his hair long to remind himself and his troops how long they were fighting.

Sadly, it was a fellow Filipino who betrayed Sakay and his men. The American sympathizer Dr. Dominador Gomez tricked the rebel leader into surrendering in exchange for amnesty, but the authorities didn’t honor the agreement.

Instead, they put him on a highly-publicized trial and hanged him. Sakay’s last words were allegedly, “Farewell! Long live Filipinas!”

Rizal’s lesser-known contemporary was the Secretary of the Propaganda movement, and wrote regularly for La Solidaridad. Using pen names like Naning, Kalipulako, and Tigbalang, he published articles on history, politics, sociology, and travel.

The Spaniards briefly imprisoned Ponce in Barcelona on the suspicion of his connections to Katipunan-led uprisings. After the war, however, Aguinaldo appointed him the diplomatic representative to Japan. Some years after, Ponce published his book Ang Wika at Lahi, where he talked about the importance of the national language.

Did you know that the Philippines actually played a role in the Korean War? In September 1950, the 10th Battalion Combat Team, our only armored battalion, landed on the coast of Korea.

Led by Captain Conrado Yap, the battalion was on a mission to hunt down North Korean guerillas. They went on to fight and win at the Battle of Yuldong in April 1951, but at a great cost.

During the battle, the captain rallied his troops by saving a wounded man, even if the action exposed him to enemy fire. Captain Yap’s heroism cost him his life, so the American government posthumously awarded him the Distinguished Service Cross.

Our history books credit General Douglas MacArthur and his soldiers with liberating the Philippines during World War II. However, they wouldn’t have managed that without a group of fisherfolk from Cebu.

The story is that Admiral Mineichi Koga drafted a strategy for solidifying their stronghold in the region and driving the American forces out. Koga kept the “Z Plan” papers in a briefcase, which ended up in the water after the admiral’s plane crashed somewhere between Cebu and Bohol.

Fortunately, the local fisherfolk gathered the floating papers and handed them over to Lieutenant James Cushing. The latter passed them on to Gen. MacArthur, and the rest is history.

Historians have long assumed that Rajah Soliman drove out the unwelcome conquistadors at the 1571 Battle of Bangkusay. According to researcher and historian Ian Christopher Alfonso, however, this was not the case.

The research historian’s six-year research uncovered a nameless young Moro leader as the real hero. The anonymous teenager apparently sailed to Tondo with a fleet of 40 large boats and died in battle with 300 of his soldiers.

Shortly after Alfonso published his 2016 book,The Nameless Hero, the National Historical Commission of the Philippines (NHCP) placed a historical marker in Pampanga to honor the unsung youngster.

Unlike all the other heroes and heroines on this list, Mary Grace Baloyo didn’t fight in a war. Rather, it was her breathtaking sacrifice that landed her a spot here.

On 26 March 2001, she and her co-pilot were maneuvering an OV-10 reconnaissance and bomber aircraft above Mabalacat, Pampanga. As they made their final approach towards the runway, the engine started to fail.

Although the two sent distress calls to the nearest PAF Tower at Clark International Airport, the plane soon got out of control. Capt. Ben Nasayao ordered his co-pilot to eject from the plane before he did so, but Baloyo refused.

Baloyo used what little time she had to steer the plane away from several subdivisions northwest of Clark Field, sparing the lives of over 200 families. She and the plane crashed into a vacant lot in Barangay Mabiga instead.

The brave pilot died instantly, her burnt body still strapped to her seat belt when rescuers recovered it hours later. She was only 26.

All too often, the blood of heroes often enrich the soil upon which a free and independent nation thrives. This National Heroes’ Day, let’s all take a moment to remember all the courageous men and women who have paved the way for all the liberties we enjoy today.