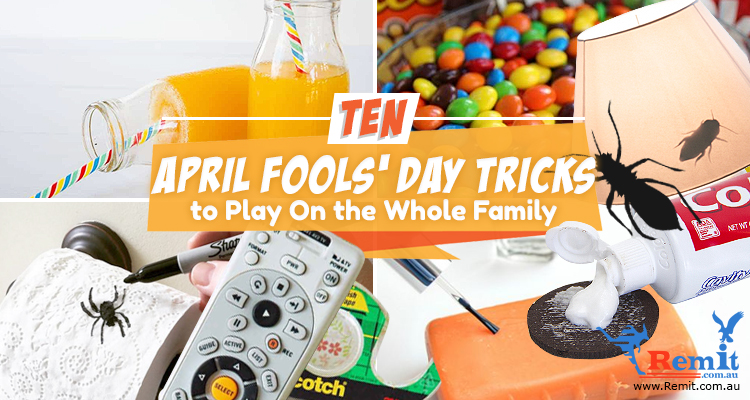 When I was still writing for a local food blog, April Fools’ was a huge thing. Each time April 1 rolled around, we would publish a fake article, complete with made-up photos to boot.

One time, someone wrote an article about how the local CD-R King would start selling fast food. Our resident photographer styled donuts in CD cases and chicken nuggets amidst bluetooth speakers so well that quite a few of our readers believed the whole shtick.

We did disavow the article the following day, of course. Thus, there was no harm done and everyone got a good laugh out of it. Such is the nature of a good April Fools’ joke.

The origins of April Fools’ Day are still disputed (the old Roman calendar supposedly figures into it), but that hasn’t stopped this unusual holiday from bringing lots of cheer to people the world over.

Feel like taking part in the fun this year? Here are quite a few ideas you can try out:

After everyone has gone to bed at night, turn as many things upside down as you can. Framed pictures, clocks, chairs, and toys…basically anything that won’t get damaged in the process.

When people get up in the morning, they’ll surely do a double-take!

Place strips of clear tape over the sensors of your remote controls, televisions, and consoles. Sit back and watch as people try to turn things on with them.

Paint a bar of soap with some clear nail polish. Once dry, leave it in the shower. No matter how much someone lathers up with it, they won’t get any suds.

Trace some outlines for grasshoppers or cockroaches on black construction paper. Carefully trim along those lines and tape these on the insides of lamp shades. Wait until nightfall for the shrieks to commence.

Tape over the mouse’s optical sensor. This will prevent it from actually being useful and will stump the user until they look underneath. Bonus points if you use a wacky photo to carry this out.

This trick requires some overnight preparation. Add some gelatin to your child’s favorite juice and bring to a boil. Carefully pour into a glass, stick a straw into it, and chill overnight.

Offer it to your kid in the morning and get a kick out of their facial expression when they try to figure out what’s happening.

Unroll the toilet paper a few sheets, draw a small spider on the corner, and then roll it back up again. When the next person comes in to use the bathroom, they’ll get a big surprise.

Take an empty toilet paper roll (the sort made out of brown cardboard). Rip it up into big pieces and moisten it with water. Squeeze out the excess moisture and form into a poop-shaped lump.

Leave it on the edge of the toilet for the next person to puzzle over.

Pour in mounds of Skittles(™), M&M’s(™), and candy-colored Reese’s Pieces(™) into a bowl. Mix together and leave it in your kitchen or dining room. Anyone who digs in will get a surprise mouthful of chocolate, candy, and peanut butter (which isn’t so bad, actually).

For a truly evil prank, take some chocolate Oreo(™) sandwiches apart. Carefully replace the cream filling with some white toothpaste and leave them on a plate somewhere for someone else to find. Yumyum.


To end, do bear in mind that there are some things you shouldn’t joke about, even on April Fools’ Day. Faking pregnancies, miscarriages, coming out, cheating, self-harm, mental health disorders, and sexual assaults is a no-no, okay? And do steer clear of any pranks that could injure your targets.

Other than that, have at it, mates. Enjoy!