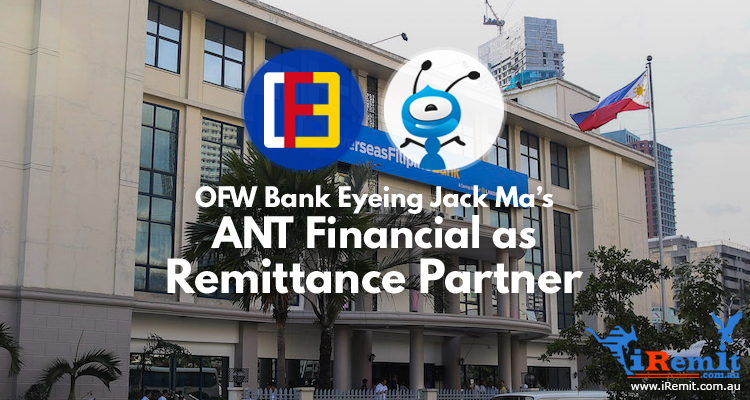 OFW Remittance is an integral part of the Philippine economy. It accounts for almost $2 Billion a month. Ultimately, the OFWs bring much-needed revenue in the Philippines. It drives consumption. It keeps the economy alive.

With this, the government set up an Overseas Filipino Bank (OFBank) to give special treatment to our modern day heroes. It aims to cater to their needs in a “one-stop shop” setup. You can sign up online, pay your family’s bills, procure investments, and even send money to the Philippines (very soon).

Will the OFW Bank change the game for remittances? The future seems bright as the OFBank is in the talks with Jack Ma’s ANT Financial to help facilitate the remittances worldwide.

ANT Financial has made a name for itself as the world’s most valuable financial technology company. It has a foothold of more than 50% of online transactions in China and a valuation of $60 Billion as of the moment (probably $100 Billion if this deal pushes thru).

After the talks are finalized, it puts the OFBank with a system placed already and a market coverage that can certainly cater every OFW out there. After all, we are the third largest country in terms of remittances.

The aim of the partnership is to lessen the cost of remittances in the Philippines.

As you can see, this graph shows the steady decline of the average remittance costs of sending money from Australia to the Philippines. But it is expected that this will be lower with the partnership.

Higher costs may also be attributable to a bunch of Remittance Companies shutting down back in 2016. Some PH Bank closed down its remittance operations abroad.

With lesser players in the market, the overall costs will surely shoot up.

For the meantime, just in case you are looking for an alternative. Make sure to look into the company’s reliability, trustworthiness, and track record.

For Australian remittance companies, they should be AUSTRAC registered to operate legally. Find out their customer reviews. Check their exchange rates and fees. It’s a plus if they are Filipino-owned and they know what your needs are.

If you find it plausible, try their services out. They may even give you flash freebies or service charge discounts in the process. *wink wink*