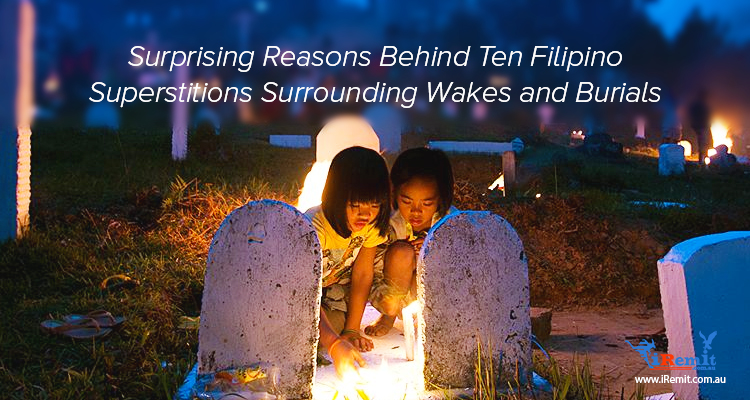 To much of the Western world, Nov. 1 and 2 are probably best spent recovering from all the candy consumed from trick or treating the night before. Halloween, after all, is quite a big production in the Western hemisphere, rivaling even Christmas in the excitement it provokes among the population.

In the Philippines, however, Nov. 1 and 2 are reserved for the dead, and I’m not talking about the zombies, vampires, and other undead creatures (costumed or otherwise) that run riot on All Hallows’ Eve. Called Undas in the vernacular, All Saints’ Day (Nov. 1) and All Souls’ Day (Nov. 2) are when all roads lead to cemeteries so that everyone can lay out flowers, light candles, and otherwise remember loved ones who are no longer living.

Now, we’ve already mentioned how superstitions govern every major milestone in a Filipino’s life and then some, and the last rites for a dearly-departed relative are no exception. What’s more surprising, however, is how these superstitions are actually more grounded in practicality than in, well, superstition, as you’ll find:

1. Guests should not bring home food from a wake or funeral.

The usual explanation given is that the food served during wakes or funerals is for the dearly departed to enjoy in the afterlife (which doesn’t make sense, considering visitors are encouraged to partake of such). Bringing home such food supposedly means the deceased’s soul will get hungry in the afterlife and thus bring bad luck on the offender.

The real reason, however, is that this superstition is a creative way of telling moochers and hangers-on to refrain from their usual practice of wrapping up unfinished food for themselves (“pagbabalot” in Tagalog). If there was nothing discouraging people from doing this, the family of the deceased would probably run out of food during the first few hours of the wake, what with some visitors attempting to sweep all the cakes, ensaymadas, and mamon into their standard-issue #TitasOfManila handbags. (I even once heard of a guy who would bring his dates to wakes so they could score some free food. Yeesh.)

And when all the funeral expenses are mounting up, the last thing you want to do is spend even more money on snacks that insensitive visitors would attempt to hoard.

2. Refrain from sweeping the floors during a wake.

Doing so supposedly equates to banishing the spirit of the dead from the place. (Maybe those folks in “The Conjuring” should have done this first then.)

Take note, the only ones forbidden from doing this are the dead’s immediate family members. Why? Well, it’s most likely a subtle nudge to all those neighbors and distant relatives munching on free mamon to pitch in and help out with the grieving family’s chores, eh?

3. Big family celebrations like weddings and birthdays are taboo up to a year after the funeral.

Officially, you’re supposed to mourn your dearly departed for a year before you go back to your #yolo style of partying. It’s supposed to be a sign of respect and also a way of proving how much the loss of a loved one has affected your appetite for life.

Practically-speaking, this practice is enforced since most families end up spending a lot on burials (those funeral plans don’t come cheap). This doesn’t leave much, if at all, to be spent on something as frivolous as an MTV-style Sweet Sixteen party.

4. Tears should not fall on the deceased’s casket.

It’s only natural to weep copious tears at someone’s funeral, especially if they meant a lot to you, but superstition rules that you should take care not to let a drop of it land on the casket. Such a lapse apparently means you’ll follow the dead into the Hereafter. Yikes.

This belief dates all the way back to when glass was too expensive for much of the general population, so a corpse’s face was usually exposed when nestled inside a coffin. Tears falling unchecked generally messed up the dead person’s make-up and make a right splotchy mess inside the casket lining, so many grieving mourners were directed to divert their tears elsewhere. (Real sensitive, I know.)

5. The deceased should not be buried with their shoes on.

One of the creepier superstitions ever, this one claims that burying a corpse with their shoes on could lead to the soul of the deceased coming back to visit, with audible footsteps announcing their return.

Heebie-jeebies aside, this belief may have been brought about by a penny-pinching relative who didn’t want to see a pair of new shoes go to waste. As with the coffin glass mentioned in the previous item, shoes were also quite expensive centuries ago and people would have been loathe to bury a perfectly good pair in the ground, hence this convenient, if creepy, cover story.

6. During the wake, there should always be people playing high-stakes games like card games or mahjong.

Traditional knowledge says these games help people stay up during wakes as they require a quick and alert mind, lest you end up losing a small fortune betting on the outcome.

However, the person serving as the dealer is usually a member of the deceased’s family and the winner of each round is required to give them a percentage of their winnings. Thus, these games are actually a way for the family to help recoup the wake and funeral expenses.

7. Don’t go straight home after attending a funeral or a wake.

Lest the spirits of the dead follow you home, so the superstition says. Now, I’m not exactly superstitious, but I actually abide by this one since I’m rather spooked by the thought of ghosts floating around my house (that, and a family friend once claimed that she encountered a sinister dark shadow in hers after going straight home from a funeral).

While this belief sounds like a plotline for a horror movie, the reasons behind its existence are actually more mundane. After a funeral, mourners simply have time to do all the errands they might have neglected during the wake, so they prefer to attend to these first rather than going home directly (and being painfully reminded that their parent/spouse/child is no longer with them).

No word on whether those cemetery spirits help out in this regard, however.

8. Family members of the deceased should wear only black during the period of mourning.

Black has been a color for mourning (though white is preferred by the Chinese) as far as anyone can remember and rightly so. This color signifies the disappearance or absence of light, a concept which anyone who’s ever lost someone dear to them can relate to.

The more practical aspect of this exercise lies in how it spares the bereaved from having to think about what to wear everyday.

Black is a color that doesn’t stain easily, and clothing pieces in this shade are hard to differentiate, so it’s harder to tell if a widow or widower is still wearing yesterday’s clothes or not.

9. Daylong and overnight vigils are meant to keep the deceased company until the funeral.

Here’s where it gets downright strange. Throughout the wake, there is always supposed to be at least one person who is 1.) awake, and 2.) standing guard by the deceased’s body. If the person on duty falls asleep, the corpse will supposedly come alive, rise up from the coffin, and get eaten by a zombie-like monster (!). If that doesn’t sound weird enough, the monster apparently replaces the corpse with a banana trunk after its meal.

Fortunately, there haven’t been any credible reports or banana-trunks-in-coffins sightings confirming this. But wait, why not just have a day-long wake and then bury the deceased, right?

Well, there’s this theory that long wakes were actually an excuse for the suitors of the deceased’s daughter or widow to come calling and linger in the family home in the days before funeral parlors. Women then were not allowed to hold property and everything they owned came into their husband’s possession, so the widows and daughters of deceased tycoons were “on the market” once their spouses or fathers stopped breathing.

10. Family members of the deceased should gather again on the 40th day after the death.

As per the Catholic faith, the 40th day after the passing of a loved one is when his or her soul ascends to heaven, as did the Savior in the Bible. As the Philippines is predominantly Catholic, families spend the day in prayer and often share a meal afterwards to mark the occasion.

The 40th day tradition also gives family members an excuse to convene about more secular concerns, specifically determining what’s left of the family fortune and how it should be portioned out among the surviving relatives.

So, maybe superstitions aren’t entirely baseless or silly, after all. It does take a clever and creative mind to come up with incentives for people to cooperate, especially while dealing with the aftermath of something as devastating as the permanent loss of someone you love.