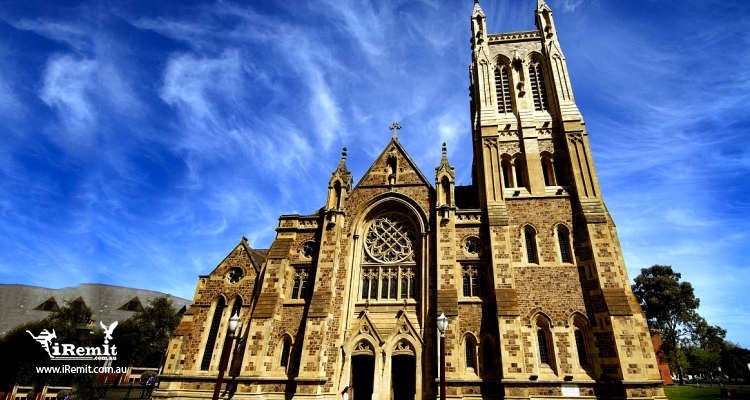 By Serena Estrella in Life in Australia
August 26, 2016

No matter where you end up on your travels, one thing is for certain. If you want to see a fellow Filipino, go to church.

From Seoul to London, you’re bound to run into Filipino travelers once you set foot in a Catholic church, especially if you’re there to attend Sunday Mass. Thanks to three hundred years under the Spaniards and the prodding of our families’ elders (Hi, Lola!), most of us are compelled to hear Mass on Sundays, even if we might be on vacation in a country that doesn’t really have a lot of churches around to begin with.

Christianity is still the predominant religion in Australia, and there are quite a lot of Catholics around. Thus, finding a church to hear Mass in shouldn’t be too difficult, and if you happen to be in Adelaide, you can even get some sightseeing done in the process.

Surprisingly, the church isn’t even a couple of centuries old. The foundation stone was only laid in 1856, and the tower was not constructed until 1887. Furthermore, work on the entire structure was completed a mere twenty years ago, around 1996.

Today, St. Francis Xavier’s Cathedral serves as the official seat of the Catholic Archbishop of Adelaide. But while the cathedral is situated well within Adelaide’s city centre, you’ll forget all about the outside world once you set foot within its walls.

The first thing you see upon entering is a long hallway topped with a tapered, timbered ceiling, which, in turn, is held up by carved marble arches. At the end of this hallway is an altar that features three stained-glass lancet windows, each of which has images of St. Patrick and St. Lawrence, as well as events from the life of Mary and Jesus.

Other locations within the cathedral also feature other religious works of art. The lady chapel altar in the southwest corner, for instance, was crafted from blocks of Carrara marble and is dotted with lapis lazuli panels. Statues of saints also abound in this church: St. John the Baptist looks over parishioners from the north-western corner while the eastern side is host to St. Patrick. As the latter is also the patron saint of Ireland, his statue is quite fittingly positioned amidst Celtic symbols.

One especially spectacular set of statues is located in the cathedral’s west corner: bronze figures of Jesus and Joseph depicted during the moment of their flight into Egypt.

Another feature that enhances the sacred space is the presence of a choir, which performs during the 11 am Solemn Mass on Sundays. Accompanied by the cathedral’s organ, it helps make the services feel a lot more calming or uplifting.

So, in case you’re in the area on a Sunday and you have yet to attend Mass (tsk, tsk, what would Lola say?), you ought to duck into the St. Francis Xavier Cathedral. It’s open to the public from early morning to evening, and they hold three Masses here every day.