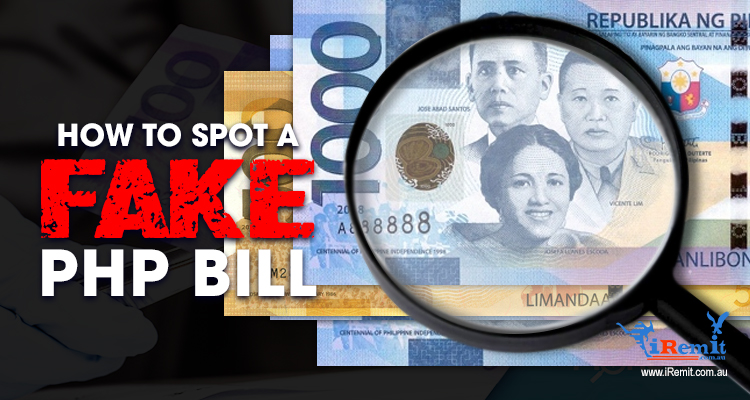 How to Spot a Fake PHP Bill

A couple months back, we talked about how a lot of us find the latest PHP5 coin design hard to distinguish from the PHP1 coin. For the life of me, I still can’t figure out why the powers that be actually approved such a thing.

Still, we get that monetary authorities have to make significant design changes to their country’s currency every now and then. Counterfeiters have become increasingly adept at faking banknotes and coins, partly in thanks to certain technological advances, and updating how the genuine article looks is necessary to stay one step ahead of these crooks.

Few things are as distressing or embarrassing as whipping out your hard-earned money to pay for a purchase, only for it to be flagged as fake. While this scenario is still rather uncommon (thankfully), counterfeit banknotes can come from vendors, big retailers, and even ATM’s.

So, how do you make sure that you and your family don’t get shortchanged by fake bills? The key is in knowing what to look for:

Does the bill feel all nice and smooth under your fingers? If so, it could be a fake.

The new generation currency (NGC) banknotes are made of abaca and cotton fibers to make them harder to counterfeit. As a result, the bills should feel a little rough when rubbed.

Here’s another counterfeit test you can do with your fingers: run a fingertip across the “Republika ng Pilipinas” text on the banknote. If you can feel each of the letters as you do so, you’ve got the real deal. The same goes for the text and numerical value at the bottom.

See that white space on the right side of the peso bill? A watermark matching the icon/s pictured on the obverse (front) of the banknote should appear there when you hold the money up to the light.

Take note, if you’re checking a Php100 banknote with Manuel Roxas on it, the resulting watermark should also be of the same guy. If nothing appears on the white space or if you get a shadowy image of, I dunno, Mickey Mouse instead, you’ve probably got fake money on your hands.

All Philippine peso notes have a series of security threads running through their obverse’s right side. The thickness would vary depending on the value of the bill in question. For instance, the threads on Php20 and Php50 bills should be 2 mm wide, while the other denominations (Php100, Php200, Php500, and Php1,000) should have 4 mm-wide security threads.

Furthermore, the security threads on all bills that have a monetary value of Php100 or higher should appear to change color when you tilt the banknotes a certain way.

OVD’s are incredibly difficult to replicate or reproduce accurately, so these reflective foil patches can be found on the two highest denominations.

The patch on the Php500 bill reveals a blue-naped parrot when tilted a certain way, while the one on the Php1,000 banknote shows a South Sea pearl.

All legitimate banknotes have serial numbers comprised of two letters from the alphabet and six numerical digits. Check the lower left and upper right portions of the bill and see if the printed characters are shown in ascending size from the left.

Oh, and here’s another fun, hold-em-up-to-the-light test: a few Baybayin characters should emerge underneath the serial number on the right side of the bill when it’s exposed to a light source. (Apparently, those characters are meant to spell out “Filipino,” but that’s not exactly stock knowledge now, is it?)

There are six denominations recognized by the Central Bank of the Philippines and they should have the following characteristics:

Usually, there are only two signatories on our currency: the President-Elect and the Governor of the Central Bank of the Philippines.

It sounds easy enough, but one reason why the so-called newly-released Php10,000 bill circulating on Facebook was debunked is because it still featured Amado Tetangco Jr.’s signature alongside President Rodrigo Duterte’s. Nestor Espenilla Jr. has held the post of Governor for nearly a year now, which thus nullifies the bill’s validity.

One last thing, you should check your money while you’re still in front of the vendor or at the store or bank where you got the cash from. This way, it’ll be easier to return the bills or coins in the event of any inconsistencies.

Earning money is hard enough. Being on your guard for fakes sounds like a troublesome extra step, but it’s certainly worth it if it gives you added peace of mind that your carefully-planned remittances won’t go to waste.

Besides, how hard is it to run your fingers over some bills or to hold them up to the light real quick?