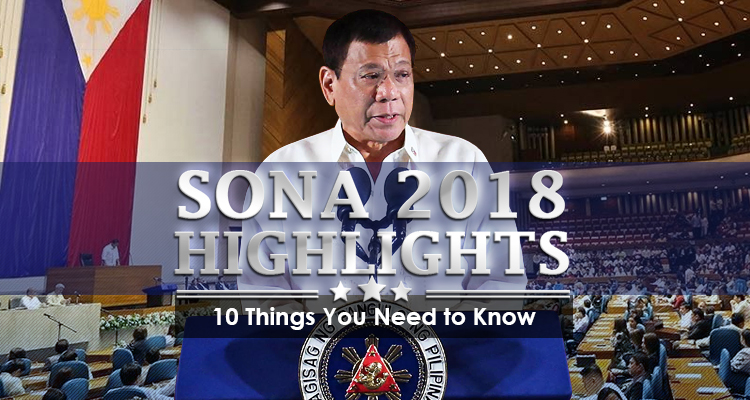 As a Filipino citizen, it is our duty to know what’s happening to our nation. On the mark of his third year, President Rodrigo Duterte addresses the nation again with his annual SONA (State of the Nation Address).

But if you don’t have the time to go thru the whole footage, we got you.  Here are the highlights of SONA 2018.

As one of the President’s main campaigns, the war on drugs will be as relentless and chilling as ever.

“Your concern is human rights, mine is human lives. The lives of our youth are being wasted and families are destroyed, and all because of the chemicals called shabu, cocaine, cannabis, and heroin.”

Duterte reiterates the effects of drugs on our youth and the crimes it will spawn in the future. The President will not let this catastrophe happen during this term.

Fight against Corruption and Red Tape

We all know the rampant corruption practices in the Philippines. And the administration is ready to strong-arm infractors.

It’s experienced time and time again that government institutions are drained funds because of these unscrupulous individuals. Not to mention, red tape has been the norm in transacting with registrations and permits.

President Duterte thanked the Congress with the swift passage of the Ease of Doing Business Act.Hopefully, this will deter the corrupt government employees from milking us of the services that should’ve cost way less.

And as to personal friends in politics:

“I have friends and political supporters whom I appointed to public office and then dismissed or caused to resign. I need not mention their names or recount the circumstances surrounding their removal or resignation. Media has more than amply reported that.

“I value friendship, make no mistake about it. But it has its limits.”

The president portrayed his impartiality in giving out his judgment.

Increase the Budget in Mindanaoan Projects, the Passing of the Bangsamoro Organic Law, and Terrorism

Another point is the increase in funding of Mindanaoan Projects. Mindanao remits funds to Metro Manila to uphold developing the capital. But the south needs to also prosper on its own.

The president promised to give significant increases in the budget of Mindanao. And he is committed to passing the Bangsamoro Organic Law to give them political autonomy over the land.

Hopefully, their new strength will pave the way to a more secure Mindanao especially against ISIS.

Our relationship with neighboring ASEAN countries is stronger than ever. Cooperation between Indonesia and Malaysia has put out business sea pirates, piracy, and other terrorists in our areas.

Moreover, the successful hosting of the 50th ASEAN Anniversary and the 31st ASEAN Summit showed that we are capable of big scale organization and cater our world-class hospitality.

But the true highlight of this part of the speech is his position in the disputed Scarborough Shoal with China.

“Our improved relationship with China, however, does not mean that we will waver in our commitment to defend our interests in the West Philippine Sea. This is why we engage China through bilateral and multilateral platforms such as the ASEAN-China and the Philippines-China Bilateral Consultation Mechanism.”

This implies the diplomatic action of the government which will be handled in a careful and peaceful manner.

“Participation in the ASEAN-China dialogue has also resulted to the draft framework for the Code of Conduct in the South China Sea which intends to resolve disputes by peaceful means.”

If you remember, a domestic helper was brutally killed on Kuwaiti soil. Joanna Demafelis was found dead in a freezer abandoned by her employers. The president is adamant that no such thing will ever happen again.

The Kuwaiti OFW Ban resulted in agreements that will protect our modern day heroes from such abuse. Concurrently, the government is working with the host countries for the well being of our other OFWs worldwide as well.

The End of ENDO

ENDO or End of Contract plagued the Filipino workforce as long as I can remember. It’s the practice where employees are hired but will be fired and replaced before they finish their tenure just before their mandatory month of regularization. The companies who practice this avoid the additional cost of regularizing employees such as SSS, Philhealth, and Pag-ibig benefits.

The president signed Executive Order 51 that reinforced everyone’s right to security of tenure. And resulted in more than 300,000 workers to be regularized as early as this month. The campaign also called out large corporations who circumvent the rules.

Duterte sought the help of the Congress to pass legislation to finally stop the practice of contractualization once and for all.

The Philippines boasts natural wonders any country could’ve been envious of. Arguably, we have the best beaches, towering mountains, and many more sites for tourists to explore.

But constant abuse will render these environmental marvels as a cesspool in the future. This led to the 6-month closure of esteemed Boracay.

“We intend to restore its environmental integrity, alongside measures to alleviate those whose livelihood were momentarily affected. Environmental protection and ensuring the health of our people cannot be overemphasized; thus, our actions in Boracay mark the beginning of a new national effort.”

And this is just the beginning. The president implores the local government to take care of their natural resources. Do not wait for the higher office to enforce emergency powers to save it. He also urges the Senate to pass the National Land Use Act to address land national land requirements for food, housing, businesses, and environmental conservation.

And given the wonders of nature, it can also bring deadly catastrophes for the people. The president reiterated learning from our experiences from the Super-typhoon Yolanda and other mega-disasters worldwide.

“We need a truly empowered department characterized by a unity of command, science-based approach and full-time focus on natural hazards and disasters, and the wherewithal to take charge of the disaster risk reduction; preparedness and response; with better recovery and faster rehabilitation.”

Thus, Duterte directs the Congress to urgently pass a law creating the “Department of Disaster Management”. This will enable the people’s safety as our top priority.

And as to our industries, the impact of mining is debatably destroying our environment. Some irresponsible mining companies have mismanaged their operations by damaging the watersheds, recharge areas, forests, and aquatic resources.

“I exhort all concerned agencies and local government units to uphold the concept of intergenerational responsibility in the exploration and utilization of our mineral wealth, the protection, and preservation of our biodiversity, anchored on the right to a balanced and healthy ecology.”

Another major change for our administration is the TRAIN Law. The TRAIN law revamped the heavily outdated tax rates of our income taxes. And redirecting the collection to other sources like gas and sweetened beverage taxes.

The president gave distinction to the Congress with the timely passage of TRAIN. But many grossly criticize the effects of it. If you analyze economically, the total impact attributable to TRAIN in inflation is quite minimal. Check this video for more information on it.

In fact, “TRAIN is already helping poor families and senior citizens cope up with rising prices. We have distributed unconditional cash transfers to 4 million people, and we will help 6 million more this year.”

“This year, we are giving 149 billion pesos worth of subsidies to the poor and vulnerable. Next year, the amount will be increased to 169 billion pesos.”

One of the factors for rising prices is the lack of rice supplies. Some businesses take advantage of an artificial shortage. The president warned these rice hoarders, cartels, and their protectors.

“Consider yourselves warned; mend your ways now or the full force of the State shall be brought to bear upon you. I am directing all intelligence agencies to unmask the perpetrators of this economic sabotage and our law enforcement agencies to bring them to justice.”

The government is working on long-term solutions for lowering prices as well. The president plans to switch from a quota system (limited allowable quantity of imports of a certain product) to a tariff system (a tax levied to products imported) where rice can be imported more freely.

“This will give us additional resources for our farmers, reduce the price of rice by up to 7 pesos per kilo, and lower inflation significantly. I ask Congress to prioritize this crucial reform, which I have certified as urgent today.”

Lastly, the TRAIN Package 2 is set to be released within the year. It aims to lower the corporate income taxes, especially for small businesses. This will allow them to have more money to invest in their own growth. That will probably trickle down to more jobs generated in the future.

Another important thrust of the government is the health of the Filipinos. Many can’t cover their health needs because of financial problems. President Duterte directs to concerned agencies to streamline sources of financial assistance for people who need it most.

The “No Balance Billing Policy” is currently institutionalized to help indigent individuals with their medical expenses. He also urged the passing of the Universal Health Care Bill to give the people with a full spectrum of healthcare services, from health promotion, prevention, treatment, rehabilitation, and palliative care.

It also incited the reorganization of Philhealth into the Philippine Health Security Corporation.

“I am confident that the Filipino people will stand behind us as we introduce this new fundamental law that will not only strengthen our democratic institutions, but will also create an environment where every Filipino—regardless of social status, religion, or ideology – will have an equal opportunity to grow and create a future that he or she can proudly bequeath to the succeeding generations.”

With that, a report for all the projects completed will be released within a few days. What do you think of the central themes of the SONA? Do you agree with them? Which ones do you like and not?

Do you miss the previous masculine bad-mouthing president in the past or do you like the mild-mannered more approachable one today? Leave us a comment below. Let us know what you think.