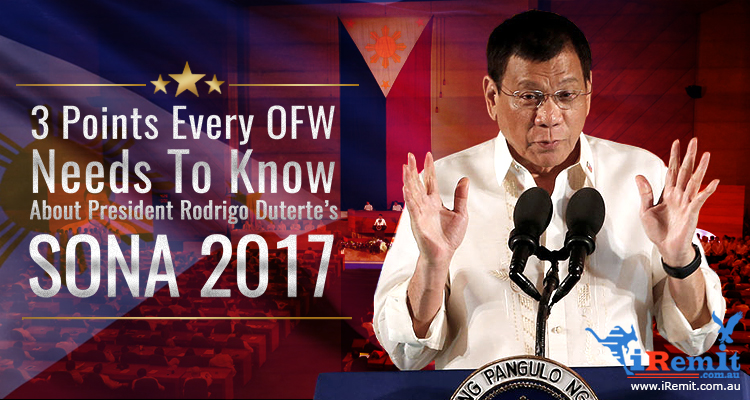 July 24, 2017, President Rodrigo Duterte delivered the State of the Nation Address (SONA 2017) to the Filipino People. Dubbed as a “Comfortable Life for All”, the president addressed the issues and accomplishments of his term and the administration’s plan of action for the coming months.

Digong’s Administration highlighted some of the accomplishments on security, government efficiency and communications. A normal citizen can now dial the President’s Hotline (8888) for erring government officials and Hotline (911) for public emergencies.

A law to cut red tape also is in the process. President Duterte demands the passing of “Rightsizing Law” to cut down “fat” bureaucracy and “put more muscle” in our structure. It would mean lesser redundant government employees and processes to uphold efficiency and effectiveness.

A more detailed narrative entitled “Report to the People” will be released to account for the regime’s accomplishments the past year.

Moreover, SONA 2017 touched on the outlook on Prosperity, Law and Order, and Peace for All. Barring the delicate issue of the war on drugs and Martial Law, the details relevant to us are as follows:

The subject of prosperity starts with a big picture of a 3.767 Trillion PHP Budget for the year 2018.

The Tax Reform shows a decrease in Income Tax with an increase in other taxes (e.g. excise taxes on automobiles and sugar-sweetened drinks). At the very least, the citizens can enjoy more control with their take home pay.

With the higher amount, you know have a choice whether to spend more or save more.

There have been criticisms with regard to this proposal. But President Duterte assures that:

“The poor and vulnerable are at the heart of my tax reform. Your support would ensure that the benefits of the tax reform will be felt immediately by them”.

The president touched also on the Mining companies to restore the natural wonders they destroyed. Or be levied upon burdening taxes.

In the issue of penalties, the Department of Finance (DOF) and Bureau of Internal Revenue (BIR) are on the hunt for Tax Evaders.

For instance, Mighty Corporation is levied with an agreed amount of P25 Billion Pesos for tax evasion and revocation of their tobacco business operations.

Thus far, this is the highest recorded settlement of the agencies, which is vital for the restoration efforts of Marawi and the earthquake-stricken Ormoc.

With this, the anticipation for the predicted high magnitude earthquake (called the “Big One”) came into discussion. The president called for the Congress to expeditiously craft a new authority or department against 21st-century disasters.

Furthermore, the president heeds upon resiliency and disaster preparedness in Metro Manila and surrounding provinces. He states:

“I am directing the Cabinet Cluster on Climate Change Adaptation and Risk Disaster Management to work together with concerned LGUs, the private sector and the affected communities themselves, in undertaking measures.”

The administration values the sacrifice of our modern day heroes. President Duterte pushes the increase of Assistance for OFWs from 400M to 1B.

The 150% increase would certainly appease our gallant heroes.

Early implications of this move are the OFW Cards available for our brothers and sisters abroad. Amidst the current controversy in its implementation, the proposal is grounded on goodwill.

Assuming the ironing of its implementing rules, this will just be the beginning of more benefits for our homesick brethren.