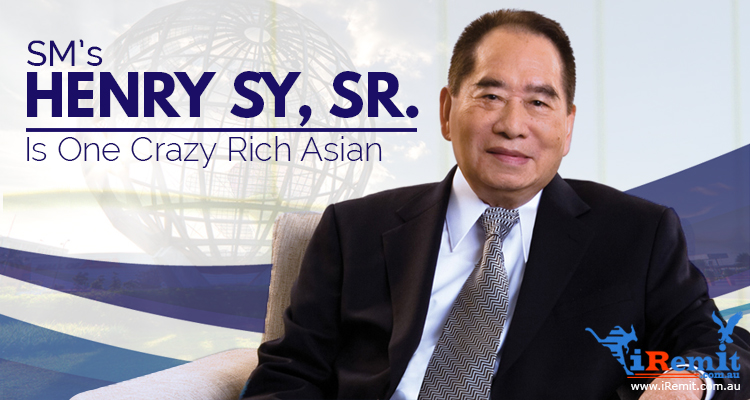 THE Crazy Rich Asian, in fact. Singapore might come in as the country with the most billionaires, but Filipino tycoon Henry Sy, Sr. is now the richest man in Southeast Asia.

The 93 year-old mall magnate recently topped the region’s Forbes billionaire list with a net worth of PHP1.039 trillion or USD20 billion. In just over a year, Sy appears to have nearly doubled his previous net worth of PHP623 billion or USD12 billion. The SM Group’s founder jumped 42 places from last year’s rankings as well, and appears to be the only Filipino on the list who has done so.

While other Filipino magnates saw their net worth increase over the past year, most of them have slipped further down the 2018 Forbes list. John Gokongwei Jr., the country’s second richest man and Sy’s one-time rival, is now at the 305th place from the 250th last year, while Enrique Razon, Jr., Lucio Tan, and Jollibee Foods Corp. CEO Tony Tan Caktiong placed 404th, 441st, and 550th, respectively, rounding out the highest-ranking Filipino billionaires in the world.

A total of twelve Filipinos made it to this year’s Forbes list, as the late David Consunji and Double Dragon Properties CEO Edgar “Injap” Sia II did not reprise their places on it. However, those who did end up on the list had a combined net worth of USD55.3 billion compared to last year’s total of USD45.8 billion.

Globally, Henry Sy, Sr. is at 52 out of 2,208 billionaires on the global list. That’s quite a feat, considering that Tesla Motors and SpaceX founder Elon Musk, Uniqlo CEO Tadashi Yanai, and Samsung’s Lee Kun-Hee placed 54th, 56th, and 61st, respectively.

Bill Gates, on the other hand, is no longer at the top of the list. That honor now belongs to Amazon.com founder Jeff Bezos, who also broke the record for being the first centi-billionaire to do so with a net worth of USD112 billion.

These are all quite astounding figures, but most of the entrepreneurs mentioned above started out as ordinary people like us. Most of us may never have such unfathomably deep pockets, but it doesn’t mean we can’t learn from the best to achieve our own financial goals, even if it’s as relatively humble as being more financially stable.