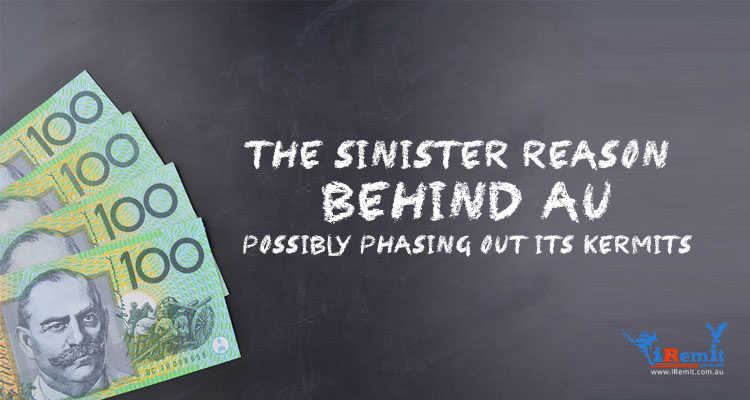 The Sinister Reason Behind AU Possibly Phasing Out Its Kermits

Kermit, as in Kermit the Frog? Why would Australia want to kill the lovable green muppet, you might think?

Except we’re not talking about puppet frogs here. “Kermit” is the slang term that Aussies have bestowed upon the AU$100 note for its green, well, frog-like color. Fun fact: In local parlance, AU$50 is a “pineapple,” AU$20 is a “lobster,” and AU$5 is a “prawn” since the notes are yellow, red, and pink, respectively. Perhaps we should start calling the Php100 bill “ ube” for the indigenous purple tuber that’s been making waves among hipster foodies the world over, as in “Hey, pare (comrade), beer is at one ube per bottle.”

But I digress. On a more serious note, there’s been some trouble brewing around Australia’s highest denomination for quite some time.

Think about it, have you handled a lot of Kermits recently? If you’re like most Australian residents, the ATM probably gives you a couple pineapples or about five lobsters whenever you withdraw a hundred bucks, right? Yet, the Reserve Bank of Australia says that the volume of AU$100 bills in circulation have doubled in the past decade. Furthermore, their research also revealed that AU$3,000 is the average amount of cash that people are carrying around.

According to US economist Kenneth Rogoff, author of “The Curse of Cash,” we should look at the tax evaders, human traffickers, and drug runners.

Picture this: a million dollars in AU$100 notes only weighs about 10 kilograms, while the same amount in AU$10 notes would weigh as much as a SmartCar. Between the two, which denomination would be easier for a drug trafficker to stash in a body bag for smuggling? It’s certainly no coincidence how raids often result in massive amounts of confiscated cash, no?

This is precisely why wrongdoers often prefer to hoard piles of paper money in the highest denominations rather than putting them away in banks. This method often leaves no paper trails, and makes it a lot easier to get a hold of cash in case you need to flee the country since there’s no bank account for the authorities to freeze.

Australia isn’t the only country with such concerns. France, Singapore, and the Netherlands have been trying to shift to a cashless economy in an effort to crack down on the cash flow of drug cartels and human trafficking rings. Many Swedish stores have even resorted to accepting only electronic payments and rejecting cash altogether.

However, while we’ve certainly made great strides in banking technology, there’s still a long way to go before society’s use of paper money can be pared down or even phased out. For starters, no one has figured out how to get electronic transfers to clear immediately all the time. Secondly, a good percentage of the population still don’t use banks for economic and/or cultural reasons. What would become of them if we all shifted to a cashless economy overnight?

Still, given how most of the cash circulating is likely being used for sinister purposes, the conversation on how to reduce its role in the economy is worth having, even if it might mean that Steve Irwin’s face will show up on the Kermits before any substantial progress is made.