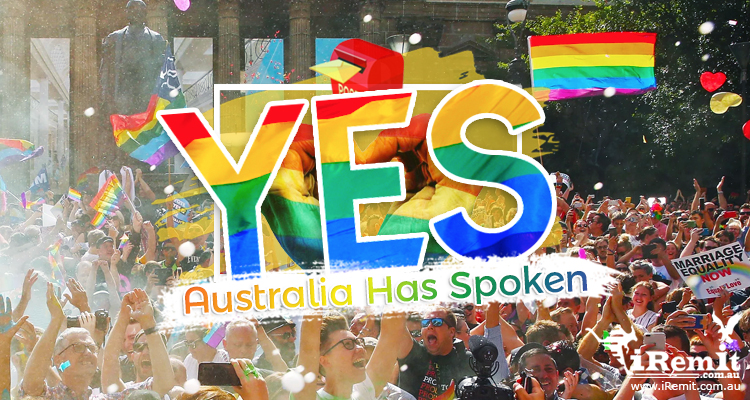 Same-Sex Marriage: Australia Has Spoken, And It Was a Resounding YES!

November 15, 2017: consider it a momentous win for the LGBT community. Australia has spoken. And it was a resounding YES to Same-Sex Marriage.

At around 10 AM, the Australia Bureau of Statistics head David W. Kalisch announced the result of Australia’s Postal Vote for Same-Sex Marriage. The eight-week poll spurred debates across the country and costed $122 Million to complete.

Amidst painstakingly announced after a long four minutes, shouts of joy and applause resonated accompanied by the celebration of the supporters after hearing the most awaited YES. The results were in favor of fairness, commitment, and love.

Even with de facto rights for same-sex couples present, the clamor for equality stems from the right to have a choice. In terms of the law, at the very least, the choice to be a de facto couple or a married coupled. A choice implicitly denied to same-sex couples.

Socially, same-sex couples are discriminated across countries. It is not uncommon for people to irk upon two men showing displays of affection. Some are even bullied because of their choice.

Or at very least, it may be the beginning.

As for most lobbying the “No” vote, across the board, the result was accepted. Most respect the decision and commended their right to voice out their point of view.

Now comes the hard part. As everyone might know, the results are non-binding. Ultimately, the parliament has the power to legalize same-sex marriage.  This is just the beginning.

With Prime Minister Malcolm Turnbull’s directive, he heeds the parliament to respect the decision of the Australian public.

A few hours after the announcement, the bill by Senator Dean Smith for same-sex marriage is now up for discussion in Federal parliament. It was pointed out that the introduction of this new legislation would not impede the inherent rights given currently to the public.

This bill will also cater to (or be amended if necessary) freedom of religion, freedom of expression, and freedom of political choice. Sensitive rights that religious groups fear that might get stripped of them after the ratification of the law.

It is expected that the legalization will be held in session for the final two weeks ending Dec 7, 2017. Just in time for Christmas.