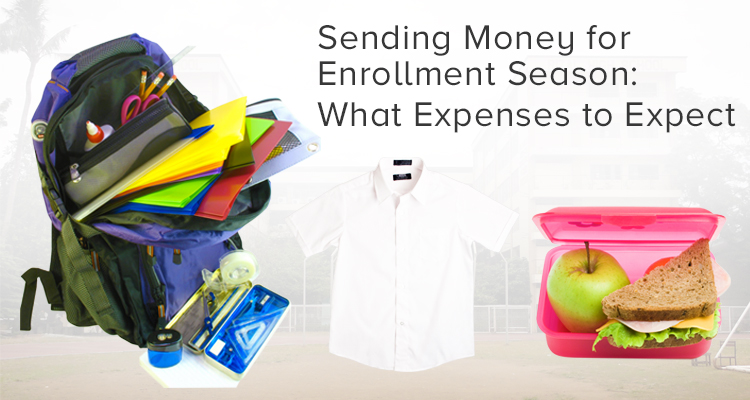 Sending Money for Enrollment Season: What Expenses to Expect

In the Philippines, the month of June heralds the start of the new school year. This can only mean two things: the end of the summer vacation and the start of a month-long spending spree. As such, parents and children alike look forward to the enrollment season as much as they do a dentist appointment.

It’s especially tough if you are working abroad while your child is pursuing their studies back home. If it’s your first time sending money to the Philippines for the enrollment season, it can be nerve-wracking to anticipate what sort of expenses to prepare for since you don’t want your kid to come up short on funds.

As a guide, here are five expenses to factor in when you compute how much money you should send over for your kid’s educational expenses:

If your child is still at the elementary or high school level and is attending a public (i.e., state-run) school, tuition is generally free. Private school is a different matter entirely. The most exclusive schools in Manila charge between Php103,000 (around AUD3,056) to Php402,632 (around AUD11,936) per school year.

Eye-popping though these figures may be, they also correspond to better facilities, such as air-conditioned classrooms, fully-equipped gymnasiums, libraries, and multi-purpose auditoriums, and perhaps the odd Olympic-sized swimming pool or two. Some exclusive schools also offer assistance and guidance for students who wish to pursue further studies with affiliate schools abroad.

Unlike in Australia, where students often work to earn their university tuition, college students in the Philippines are mostly still funded by their parents. As with Australia, though, local universities are quite expensive.

Still, it pays to be a college graduate in the Philippines since your chances of landing a high-paying job are much higher than a high school graduate’s.

I attended a single-sex, Catholic school growing up, and not only did we have uniforms, but there were also guidelines on how to wear them, such as the required skirt lengths, tucked-in blouses, etc. It’s largely the same for other schools, be they public or private. Perhaps it’s their way of training students to dress appropriately and to keep themselves looking neat and put-together. 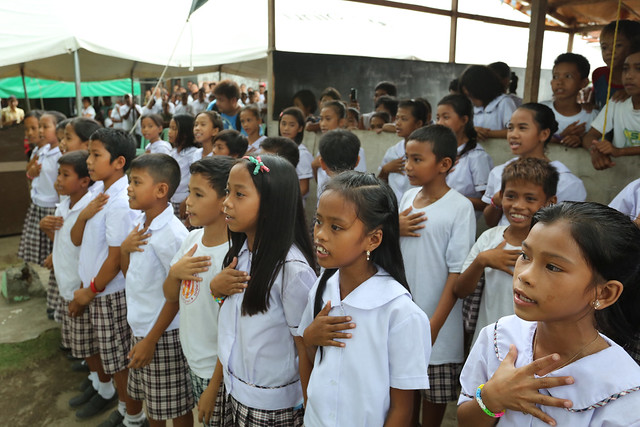 Public school uniforms typically cost around Php500-Php600 (AUD18-20) for the elementary and secondary levels, while private school uniforms cost about a percentage more.

Still, it’s a pretty good investment since your child will no longer have to think about what to wear in the mornings and the uniform would last about two to three years at least (if your kid has normal growth spurts, that is), so there’s less of a need to buy new clothes.

Most schools have a list of required textbooks and supplies (e.g., a set of notebooks, rulers/protractors, and pens or pencils). These typically vary year after year, although some materials can be used throughout your child’s educational career, such as a Bible (if your child attends Catholic school, like much of the population. I still have mine from elementary school) or a scientific calculator for those grueling Chemistry or Calculus exams.

If your child is already in college, s/he may need new textbooks every three to six months or whenever a term ends. These textbooks can be expensive as many of them are imported, and I remember purchasing one that cost about Php2,400 (AUD71) for just one subject.

Pro-tip: It can be a big waste to buy a brand-new textbook if your child will only be using it for one term in college. As a cheaper alternative, you can encourage them to try finding the said book in the university library or purchasing a secondhand copy from a friend who’s already taken up the course.

Most students in Metro Manila take public transportation to get to school, whether it’s by train, jeepney, or tricycle (or sometimes all three). Elementary or high school students also ride a school bus service while quite a few make use of family vehicles.

Transportation costs vary largely depending on your child’s route to and from school, so talk about how much they spend each day to get a better picture of how much they need. You may also want to make allowances for cases where they might need to take a pricier option such as a cab or a car service like Uber (e.g., when the weather turns bad or if they end up having to stay in school till night-time).

Or you can also consider the next factor on this list.

If your home back in the Philippines is quite far from your child’s school, it might be best to set him or her up in a dormitory or a condominium unit nearby once s/he is old enough. (For many students, this generally happens when they start attending university.)

While it may sound more costly, it does provide your child with a wide range of benefits. For one, if you choose a dormitory or a condominium in a good location, your kid can do away with transportation costs altogether, at least where getting to school is concerned.

Thanks to the current real estate boom in the Philippines, many dormitories and buildings are now within walking distance of the major universities and schools. Your kid will also be able to study better if they don’t have to spend so much time cooped up in trains or jeepneys just to get to school.

Best of all, living close to school means that your child will be able to rest better and thus be more receptive to learning.

A student’s allowance is often referred to as “baon” in the Filipino vernacular. The word typically refers to a packed meal or snack that the student brings to school, and since the said allowance is often used to purchase snacks or lunch between classes, the correlation has stuck.

These days, though, students use their “baon” to purchase things other than food. Extra school supplies, prepaid cards for mobile phones (all the better to call or text Mummy with), and the occasional outing with friends also figure into the equation. Many students also save up for stuff they may want to buy by setting aside a portion of their allowance each time.

How much allowance you want to give your child for incidental expenses is all up to you, of course. In any case, you may also want to set up a fund for emergency expenses so that your kid won’t have to wait too long for a much-needed remittance in case something comes up.