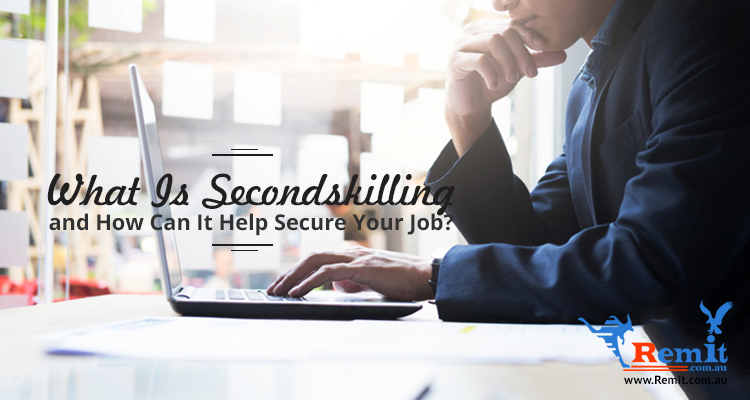 By Serena Estrella in Business and Career
April 11, 2018

What Is Secondskilling and How Can It Help Secure Your Job?

Who here among us lives a double-life?

(And no, I don’t mean having a mistress or a lover on the side or secretly indulging in any serial killer tendencies after dark, okay? This is a family-friendly blog, let’s keep it wholesome, people.)

I’m talking about those of us who have hobbies or side gigs that are quite different from our day jobs. Take my friend and iRemit colleague, for example. Leandro is an accountant by profession (and a pretty darn good one at that), but he also writes some pretty nifty articles for our website. I, on the other hand, manage both a property and a small food delivery joint during the day and also contribute content to the iRemit blog in my spare hours.

In millennial parlance, these sorts of arrangements are part of the so-called gig economy. How else can we afford to buy avocado toast? For a time, older generations turned their noses up at it since traditional wisdom dictated that giving your day job and/or profession full, undivided attention is the best way to be excellent at it.

That may have been true, except being extremely good at one thing might no longer be enough to land you a job…..especially when your competition happens to be a robot.

The Rise of Automation: Why Some Professions Are No Longer As Secure As They Seem

Thanks to technology, more and more of our daily lives are becoming automated. Mechanized humanoid robots, drones, and artificial intelligence software programs can now be found in cockpits, factories, schools, and operating rooms. Self-driving cars are currently being given a test drive on the market, and in some countries, ordering food at a restaurant or fast-food joint is done with the mere touch of a button.

However, it’s not just the low-wage, low-skill jobs that are at risk here. A good percentage of highly-skilled and highly-educated employees in fields like law and accounting are also in danger of being replaced by their AI counterparts. There are now even robots that were designed to do all sorts of farm work from milking cows to weeding cabbage patches, and CGI techniques have made it possible for studios to “resurrect” dead actors’ performances onscreen!

Not only do machines and software execute tasks with greater precision and accuracy, but they also don’t require minimum wages, 401k’s, and healthcare programs like human employees do. They also don’t take any sick days, nor do they get into conflicts with their co-workers, and retraining is as easy as installing software updates.

No wonder several businesses are itching to make their operations semi or fully automated.

In Singapore, where their aging workforce find their skills being rendered increasingly outmoded before retirement, the government has come up with a possible solution that’s quite similar to the stuff we do within the gig economy.

It’s called second-skilling and it refers to developing one’s skills in a sector that’s different from the one you’re working in. The second skill, so to speak, can complement the ones you’re already using in your current job or they can lead to a completely different career path. What’s more, the Singaporean government provides each citizen from the age of 25 and above with a stipend of about US$350, which they can use to train for skills they’re interested in, not just the ones the companies they work for might require.

No other government might be providing the means for its people to pursue additional skills training right now, but it doesn’t mean us non-Singaporeans can’t take a leaf out of that book. Should you want to do some second-skilling of your own, there are two key components to bear in mind: work and passion.

If you want to choose a second skill that will be fairly future-proof, consider thinking about what you enjoy doing – while also looking at the skill set that comes with it and how these can match what could be in demand in the coming years. For instance, if you’re a marketing professional who likes to draw, why not take up some free online courses on graphic design?

Lastly, career consultants also recommend going for general rather than specialist training programs. You can always branch out into the specifics later on, rather than end up going into intensive study for something that an AI bot will end up doing far better than you anyway.

So, What Happens Now?

When Microsoft first came out with its office software, skeptics claimed that there was no need for it. Who needs MS Word and MS Excel when you’ve got an office full of underpaid twentysomething interns? (Boy, some things never change) The whole world, apparently.

So, whether we like it or not, the 21st century is bringing about some pretty far-sweeping changes. In many ways, we can’t just carry on as other generations have before us. Cultural and technological developments have simply rendered several time-honored practices obsolete. Modern careers are no longer ladders where you linger at each step before moving on to the next. They’re more like conveyor belts where you have to keep learning, unlearning, and relearning things to stay in motion, no matter how old you are or whatever career stage you might be at.

Yet, the necessity for second skills doesn’t have to be a burden. Let’s look at it this way: Artificial intelligence is great for a lot of things, but it still has nothing on humans when it comes to creativity and the dynamics of human relationships. Thus, if you’ve always been passionate about music, art, or literature, you’ve now got the perfect excuse to see if you can make yourself a second career in those fields.