By Serena Estrella in Life in Australia
November 2, 2016

Brisbane’s Parliament House is to Queensland what the White House is to the US (or, more fittingly, what Malacañang Palace is to us Filipinos): a beautiful, historic landmark that also happens to be a seat of power.

Perched on the corner of George and Alice Streets, the French Renaissance Revival-style building has held court in this corner of Brisbane since the late 19th century. It was built as a more suitable meeting place for the Queensland Parliament (they initially convened at the former convict barracks on Queen Street, hardly felicitous), and it remains so to this day.

Parliament House’s elegant façade is often credited to Charles Tiffin, who was also responsible for so many of Queensland’s other historical buildings like the Customs House, the Old Ipswich Courthouse, Sandy Cape Lighthouse, and several other like projects besides. It remains a popular tourist site not only for its historical and political significance, but also because the following principal rooms still hold a lot of the original, purpose-made furniture:

While visitors and guests are now required to enter through the Parliamentary Annexe Building, it was quite different in the old days. The formal entrance used to be at the middle of the Porte Cochere, where a big, old, and grand staircase rises up to meet you and leads upwards to landings decorated with intricate stained glass portraits of famous British monarchs like Edward VII and his mother, the formidable Queen Victoria.

The former Parliamentary Library grew so big in size that it had to be moved to the Parliamentary Annexe, so its former location now serves as the Members’ Reading Room, where Members of Parliament can attend to other business between sessions. The quaint, cozy, and high-ceilinged room still holds the original copies of Queensland’s Parliamentary Pages and Commonwealth’s Hansard Debates while the second-floor library houses rare and valuable books from the legendary O’Donovan Collection. 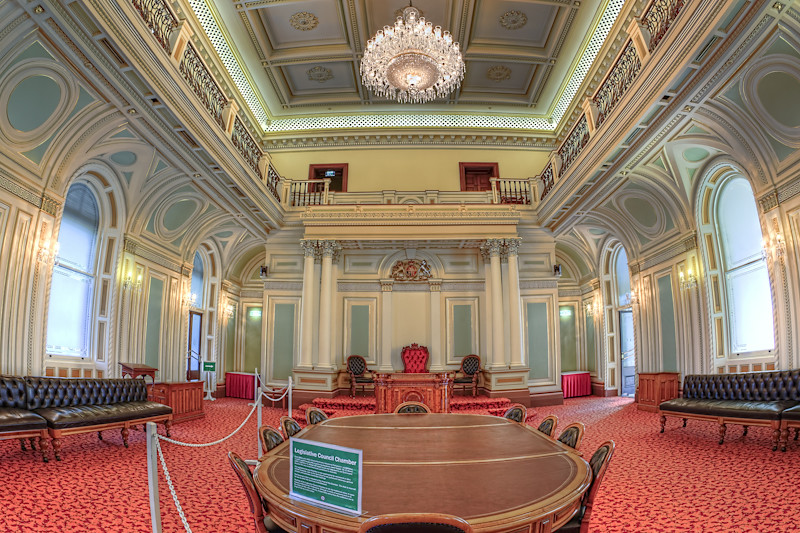 This room is now used mainly for ceremonial or formal occasions rather than functional ones, but its decor bears witness to how government was conducted back when the British monarch had absolute authority over the Empire. The red floor is most likely so because of the color’s traditional association with royalty and the Red Chair presiding at the head of the chamber was generally reserved for the Ruling Sovereign or the latter’s representative.

In use since 1868, this 24.5 x 11 metre-high space was built with the increasing number of future parliament members in mind (never mind that the original parliament had only 26 members who probably rolled around like peas in this massive space at the time). Unlike the Council Chamber, this room has green flooring and is still used for many proceedings today. Modern furniture as well as equipment like air-conditioning, closed circuit television, and communication tools have been installed for that purpose, but this was done so in a way that complemented rather than disturbed the original decor.

The word “stranger” was used to refer to someone who wasn’t a member of the Legislative Assembly, so this room is primarily for guests of the latter who come to meet them for other business during busy sittings. Some of the early Australian cedar yoke back chairs in this room are said to have come from the old convict barracks on Queen Street!

After you’ve strolled through Parliament House’s hallowed halls, you may also want to have afternoon tea in the Strangers’ Dining Room. The delicious scones and tea being served here are sure to cap off an afternoon of basking in this historical building’s lavishly decorated compound. Don’t forget to pick up a few souvenirs at the gift shop!