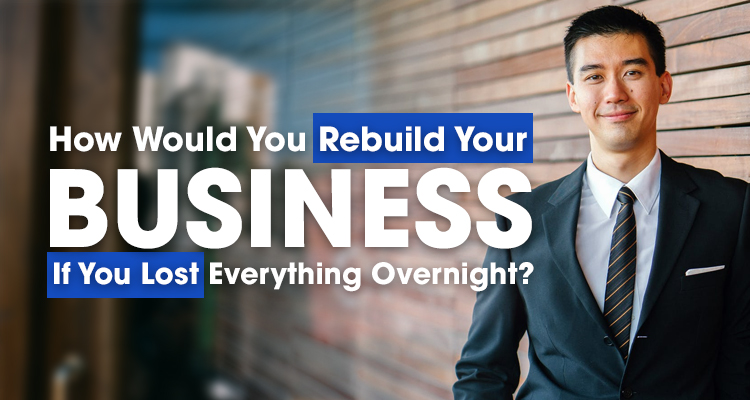 By Serena Estrella in Business and Career
July 27, 2018

How Would You Rebuild Your Business If You Lost Everything Overnight?

We’re all familiar with the standard rags-to-riches story. National Bookstore’s Socorro Ramos, Mercury Drug’s Mariano Que, SM’s Henry Sy….almost all Filipino entrepreneurs worth noting started with nothing, after all.

Building a business empire out of little more than an idea and one’s own steely determination will always be a remarkable feat. However, losing all of that AND somehow still managing to get very similar results afterwards is even more impressive.

Life can be pretty darn unpredictable, and being on top today is no guarantee that you’ll be the same tomorrow. Sometimes, all it takes is one wrong decision or one spectacularly disgruntled customer or partner to drive everything you’ve worked for in the past decades down the drain. It would be a nightmare, to be sure, but the most important question in that scenario would be, “What are you going to do about it?”

Five of the most successful individuals in the world were asked the same, and these were their responses:

Richard Branson, the Virgin’s sixtysomething founder, would opt to launch a new business if he was forced to reboot. He also said he’d comb through his notebooks for any business ideas that might have slipped through the cracks over the years and then start from there.

Business trends may come and go, but the fundamentals of building a strong company remain pretty much the same. Thus, entrepreneurs who’ve faced ruin can still draw on key lessons to rebuild their empires.

Marcus Lemonis, millionaire star of CNBC’s “The Profit,” would opt to sell cars if he had to start over.

“Because I’m working with somebody else’s inventory, I control my own pay plan. I control my schedule. I can get up at 5 in the morning and work ‘til 10 at night. And I enjoy it.”

Whether you’re building your business from the bottom or pulling off a do-over, there’s no substitute for hard work. On the other hand, putting in the hours doesn’t have to be so arduous if you can find joy in the work itself and hope in your desired outcome.

American businesswoman and “Shark Tank” investor Barbara Corcoran credits waitressing as the one job that best prepared her for building a successful company. It does make sense, considering that the job requires you to think on your feet, anticipate the needs of all sorts of customers, and deliver the sort of service that makes you stand out from other servers, all of which are key to keeping your sales coming.

Corcoran also added that she wouldn’t let the theoretical collapse of her business intrude upon her happiness either. “I was happy before I made any money and I guess I’ll be happy again,” she was quoted saying.

Humility and the right mindset will really get you ahead, indeed.

4. Bartend and work in sales.

Corcoran’s fellow “Shark Tank” investor and Dallas Mavericks owner Mark Cuban’s approach to regaining his fortune in the event of a catastrophe will probably resonate will a lot of entrepreneurs: taking on a sales job during the day and then working shifts as a bartender at night.

Many would-be millionaires are aware that a single-income lifestyle rarely ever leads to financial security, so they aren’t above taking on side hustles or sales gigs. These would not only provide a bit of extra income but often leads to the acquisition of new skills and useful contacts as well, all of which are indispensable to a successful business.

Boston Beer Company founder Jim Koch actually did come close to losing it all when a bottle defect forced them to recall 25 million bottles of beer about a decade ago.

The company managed to survive the debacle, but Koch remembers what his father told him when he was grappling with uncertainty: “Don’t worry, it’s been a great ride and I’m proud of you.” This then spurred the businessman’s attitude towards the possibility of loss: “If I lose everything, it’s OK. It’s been a great ride. You did some amazing things. What’s next?”

In business, as in life, we all have to keep moving despite things.

Given how every self-made millionaire started from scratch, perhaps it’s not so surprising that they would be able to replicate their success in some form if circumstances forced them to do it again.

The journey to your first million often results in you developing some pretty nifty traits, so much so that you are no longer the same person that you were when you began. Anything else that follows, be it success, failure, or success after failure, would simply be a reflection of how much you have learned and how much you are still willing to learn along the way.