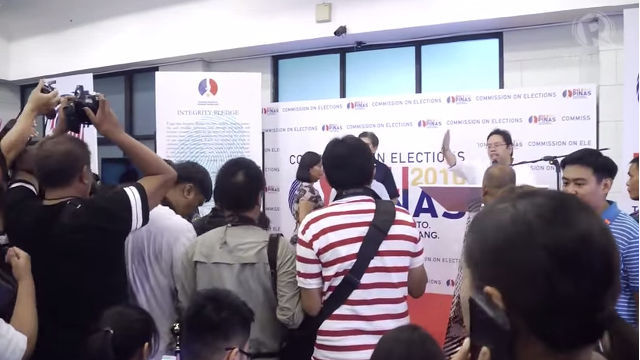 Presidential Elections 2016: The Funny, The Annoying, The Controversial

Where elections is seen as a serious matter in other countries, it often ends up being quite an amusing (and somehow annoying) spectacle in the Philippines.   This is why people have more reasons to tune in to every single thing that’s going on as far as next year’s elections are concerned. Aside from their yearning to weigh the political and economic repercussions of the different candidates’ platforms, a lot are also interested in seeing the funny, the annoying, and the controversial candidates gracing the halls of COMELEC offices.   The 2016 Nuisance Candidates   When it comes to the funny stuff, nothing beats the usual parade of nuisance candidates who always manage to snatch the spotlight from the more serious candidates in one way or another.   It somehow reminds me of American Idol. People always watch the auditions not because they want to see those with the biggest potential to win, but those who will deliver the most ridiculous audition pieces.   The same thing sometimes happens in Philippine politics. Aside from the real political hopefuls who have true intent to win the elections, there are also those who manage to turn an otherwise serious event into a comedic one.   Take for instance Presidential hopeful Arturo Pacheco Reyes. He does not only want the Philippines to become the 51st American State, he also says that he wants to get rid of the rainy and dry seasons in the Philippines. His solution? To legalize the four seasons. He says that once we start having winter, spring, summer and fall, then we can finally stop worrying about the rainy and dry seasons.   Then we have Allan Carreon, also running for President. A man who claims to have the ability to communicate with aliens online, he introduces himself as the ‘Intergalactic Earth Ambassador’. Aside from promising to provide wi-fi for the entire country, he also says that he can easily protect the Philippine territory. All he has to do is talk to the other Intergalactic Ambassadors, and we can finally win the ongoing West Philippine Sea dispute.   Trending high on Twitter is Romeo John Reyes, whose stage name, Archangel Lucifer, can pretty much give you an idea of how he sees himself. He says that it was his ‘master’ who chose him to lead the country.   He claims that he was also scared when he found out who he really is, but is now ready to follow his true destiny.   Alfredo Tindugan, on the other hand, is hoping to put a ‘divine government’ into place. Place him across Archangel Lucifer, and you have a full-on Game of Thrones scenario.   Jean Pierre Pardo is a 39-year old fashion designer who want to focus on home improvement.   Daniel Magtira hopes to fight for the Constitution and equality, two serious concerns that could actually show that he really is serious about saving the country. The he goes and introduces himself as Kris   Aquino’s husband, and he loses his credibility yet again.   Finally, you have Freddiesher Llamas, a tricycle driver who seems to want a person to govern the person governing the Philippines. Confused? Maybe we can ask him to clarify what this means as he says he wants to be the “President ng Pangulo ng Pilipinas”.   Honest Intentions   What does it take to be declared a nuisance candidate?   Guts, obviously. A lot of guts.   A lot of people believe that nuisance candidates draw a thin line between self-confidence and lack of shame.   It should be noted, however, that just because one is declared as a nuisance candidate does not mean that you only aim to amuse or to annoy (depending on how people would receive your candidacy). There are those who filed their Certificates of Candidacy because they truly want to help.   Alejandro Ignacio, for example, believes that an ordinary citizen like him would be a better fit for the post because he is not tainted by the greed and corruption that taints seasoned politicians. He believes that as a clean and honest citizen, he would be able to help protect the Filipinos who are now suffering in hunger and poverty.   Victor Quijano, a chemical engineer, believes that a federal government would be more applicable to the country’s current state.   Criteria for Being Declared as a Nuisance Candidate   Whether their intentions are serious or not, every single Certificate of Candidacy filed would have to be accepted by the Commission on Elections. This is part of our country’s democratic state and is a sign that everyone has the right to at least express their intention to try and make a difference in the way the country is run.   However, this does not mean that they can immediately be considered as official candidates.   According to the Omnibus Election Code, the COMELEC can cancel the COCs of people who have been seen to have:   The official list of candidates for the 2016 elections will be announced on December 10.