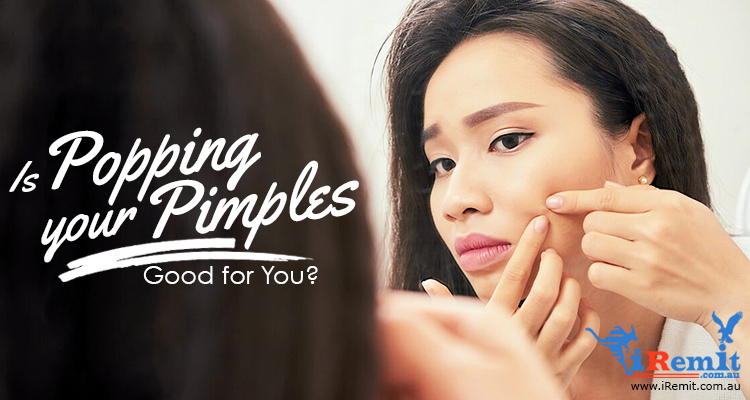 By Leandro Eclipse in Health and Fitness
August 25, 2017

Is Popping Your Pimples Good for You?

Ever popped a pimple? The sensation when you squeeze that zit is certainly addicting. Some are even so obsessed; there is a coined term for it.

Compulsive Skin Picking (CSP) or “Dermatillomania” starts off from pre-existing acne, scabs, or other skin defects. And the habit carry-on after the defect has subsided.

The dopamine spike from this soon-to-be habitual pastime might be comparable to some types of addiction. But barring being addicted, is occasional pimple popping really that bad?

This may not be common knowledge, but Acne starts to form when we have either INFLAMMATION or HORMONAL IMBALANCE.

Inflammation is our bodies attempt to heal itself after an injury. Some examples may be induced by gut problems, food allergies, unhealthy diet, and stress.

While hormonal imbalance may begin by insulin resistance (IGF-1) from sugar intake, androgens and estrogens, and also stress.

Both happenings are the root cause of sebum oxidation.

Sebum is a natural oil produced by our body to lubricate our skin to prevent dryness and damage. Sebum oxidation is just sebum reacting to oxygen. The same way a fruit ripens when exposed or a dead body rots with time.

But the problem is the natural moisturizer content of sebum called “Squalene”. When sebum oxidizes, Squalene transforms to Squalene Peroxide.

Squalene Peroxide clogs the pores and hyperkeratosis occurs. The skin produces more keratin that binds the skin together including dead skin cells (which we normally just shed).

This blockage of pores causes bacteria to feed on it. In return, with our body’s immune response, turning the blockage into pimples.

This goes to show that pimples are not caused by dirt primarily. Because, without the formation of squalene peroxide, the dirt can not form pimples on our faces.

So Should You Squeeze Your Pimples?

Think of it as a cluster of bacteria trapped and feeding in a single pore. What will happen if you pop them?

The bacteria can now move freely and infect other areas. Also, darkening and scarring might occur that can leave the skin permanently damaged.

A pimple ultimately heals. But then, if new pimples pop out month after month, you should battle the source head on.

Pimples might be the same outside but its conception is different for different people. There is no one-size-fits-all solution applicable for everyone.

It is best that you target the root cause of your pimple. We should know first if it is Hormonal or Inflammatory in nature.

In General, you can avoid acne by the following:

If using cosmetic products, use antioxidant rich oil-free products. But then, avoid overusing products to cleanse or exfoliate.

Pimples are not caused by dirt and the oil can’t be “washed out”. This may just aggravate the problem in the long run.

By pinpointing the origin of our problem, we can tackle our problem systematically. But then, let us start by not popping those pimples gentlemen. I said stop!