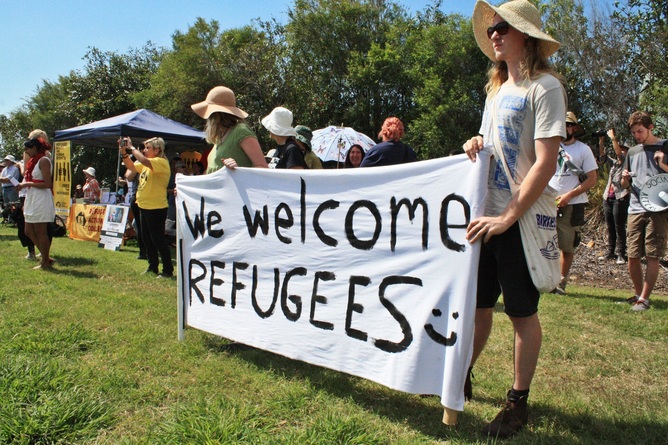 President Aquino announced that the Philippine government could not afford to take Australian-processed refugees in a permanent basis.   Australia’s proposal:   Aquino said that the government is seriously studying the proposal from Australia and that there is no agreement yet. Australia’s proposal is more permanent in nature and the Philippines can only provide one that is of transitory nature.   Aquino cleared reports that the Aquino administration already rejected Australia’s proposal before the Foreign Correspondents Association of the Philippines at a Pasay City hotel.   Citing the Philippines current population and needs, President Aquino is quoted saying “Australia can recognize that we do have a significantly bigger population than they do. We have challenges to meeting the needs of our people right now. We would want to assist but there are limitations to how far we can assist.”   Note that one-quarter of the country’s 100 million population lives in poverty. Australia, on the other hand, is one of the richest countries in the world.   It would be recalled that Australia considered the Philippines as a solution to its refugee problem after the multimillion-dollar deal with the Cambodian government was dubbed as an expensive flop.   Australia struck a deal to resettle refugees from Australia-run detention camp in Nauru to Cambodia. However, only four refugees took the offered cash, free health insurance and accommodation to move to Phnom Penh, Cambodia.   Australia’s refugee policy:   Australia has been criticised for its hard refugee policy. Humanitarians called the attention of the government for turning refugee boats back to Indonesia and risking refugees’ lives   In Addition, Australia is a signatory of The United Nations (UN) Refugee Convention. The convention “recognises that refugees have a lawful right to enter a country for the purposes of seeking asylum, regardless of how they arrive or whether they hold valid travel or identity documents. The Convention stipulates that what would usually be considered as illegal actions (e.g. entering a country without a visa) should not be treated as illegal if a person is seeking asylum.”   Still, Australia, kept its strict refugee policy citing that it actually saves more lives by making refugees realise that the country does not welcome refugees on boats. This minimises the number of sea related accidents that refugees may encounter.   Refugees were refused to step on Australian soils and instead were placed on camps in Nauru, a small pacific island nation and Papua New Guinea where their status will be processed.   The UN even went as far as describing the condition in Australia’s processing centres as degrading and cruel.   Refugees in the Philippines:   In contrast, the UN lauded the Philippines when it offered to welcome refugees on boat.   The country also has a list of refugees welcomed since 1923. These include White Russians, Spanish republicans, Jewish, Chinese, Vietnamese, Iranian, Indo-Chinese, and East Timorese refugees.   Recently, the country offered Rohingya refugees to Philippine shores after news broke that they were not welcomed in neighbouring countries. These refugees came from Myanmar, Iran and Afghanistan.   Under good faith between two countries, Australian Immigration Minister Peter Dutton is still hopeful that an agreement that suits the best interest of Australia and the Philippines will be reached.   Special thanks to The Conversation for the main image.