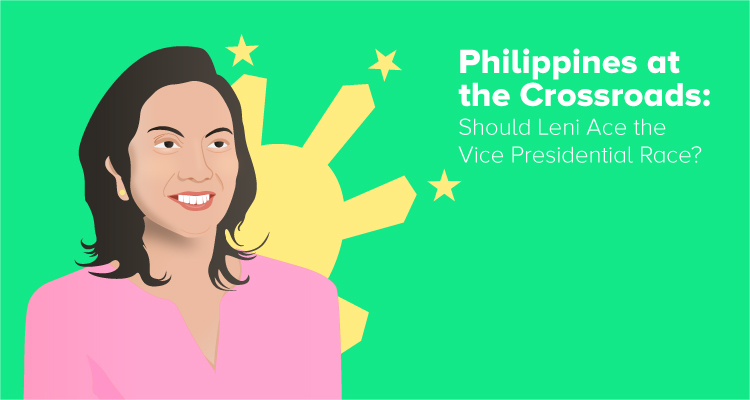 Philippines at the Crossroads: Should Leni Ace the Vice Presidential Race?

Dejavu, Philippines. Another widow wearing yellow stands against a man named Marcos.   Here we are again, maybe less dramatic than 30 years ago with all the yellow confetti, marching nuns and military tanks. This time, the widow brings along with her a slipper, as a mark of simplicity and of her advocacies for the average Filipino.   Marching with her are some of the usual yellow elites, Couples for Christ, co-lawyers, some Ilocos professionals and the Sumilao Farmers (these are the groups who publicly stated their support) and of course, the other nameless groups and individuals who believe her to be the best woman for the role.   Ms. Leni Robredo came into the spotlight in 2012 as the widow of the late Department of Interior and Local Government (DILG) secretary Mr. Jesse Robredo. Mr. Robredo was former mayor of Naga city before being appointed by outgoing president Benigno Aquino III to head DILG.   He was known to be another of those rare politicians, like the incoming President Rodrigo Duterte, who is truly hands on. He walks around the town in simple clothing to check on everyone. He is Naga’s hero who was catapulted to a kind of legend when he died due to a plane crash. Filipinos watched as Ms. Leni Robredo, together with her three daughters, mourned on national television.   This was then.   Years later we saw more of the Ms. Leni Robredo on TV, debates, sorties and posters. This time she is running as the Vice Presidential bet of the Liberal Party alongside Mr. Mar Roxas III. In fairness, although she acknowledged her husband’s role in her popularity, she wants people to know of her own narrative.   So, who is the woman named Leni Robredo?

Ms. Maria Leonora “Leni” Robredo is an elected congress representative for the third district of Camarines Sur since 2013.   She holds a degree in Economics from the University of the Philippines and a law graduate of the University of Nueva Caceres. As a lawyer, she:   Became an advocate lawyer for the marginalized sector, in fact, she belongs with the Naga chapter of Sentro ng Alternatibong Lingap Pang Legal (Saligan) which is the national alternative lawyers group for farmers.   She also started the Lakas ng Kababaihan ng Naga.   She was also past president of the Naga City Council for Women.   She is a member of the Federacion International da Abogadas.   Worked with the Public Attorneys’ Office.   She could have been a regional trial court Judge in Bicol.   As a political leader she believes on a down-to-earth approach and leadership style. During her campaign, she started from the bottom and worked her way to the top. Although this takes longer, it was an easier way for her to approach people and send her message across. This down-to-earth approach is symbolized by the slipper logo she used before the elections. Supporters also said that the congresswoman wears slippers when visiting her constituents.   Ms. Robredo’s supporters also report that she really walks the talk. Like her husband, she does not like the pomp and instead she still rides the bus and avoids the red carpet. She accounts every centavo of the local budget, no kickbacks. In fact she is the 49th poorest member of the House of Representatives with just P8.03 million filed on her 2014 SALN.   In the short years she worked in congress she was able to push the Full Disclosure Bill that “requires elected officials and government agencies to fully disclose transactions, documents and budgets of public interest.” She also advocated for the Freedom of Information bill and the charter extension of the Philippine National Railway.   Despite her job, she is still described as a hands-on mom who makes sure that her family knows they are important to her. She likes organizing for family trips and having a sip of green tea in the morning.

If she will be proclaimed the next vice president of the country, Ms. Robredo would like to focus on the “eradication of hunger, equal distribution of wealth and opportunities all over the country” and, of course, gender equality. She opposes contractualization, political dynasties and death penalty.   Some experts think that Robredo’s win may be able to balance Duterte’s harsh and rash tendencies. Although she made sure that she will support the administration and give the same amount of hard work she planned to do with Mr. Roxas.   The fight for the vice presidential seat is not yet over. With numbers so close, a proclamation may not happen until all votes are counted – and even then, the losing candidate may not concede until “proper investigation” is done.   The close number of votes between two vice presidential aspirants do not only make it hard for the board of canvassers but it also seem to show how polarized our country is – yellow versus red. Of course there are other colors around, but at the end of the day, it is still these two colors opposing each other. History is a good teacher, and we certainly do not want history to repeat again and give us a beating.   Sadly, judging from the heated exchanges in forums and social media sites, realities between these two groups are viewed very differently.   Perhaps, one small way to stop the hate and faction between our countrymen is for each candidate to act more like dignitaries. Stop spewing negative things at each other, they can file as many cases as they like but they do not need to do it in public every time. Perhaps, they should follow those who ran for presidency and work towards the unity of the Filipino people – whatever color they wear.   Isn’t it the ultimate goal of each political aspirant to see the Philippines as one united and prosperous country anyway?