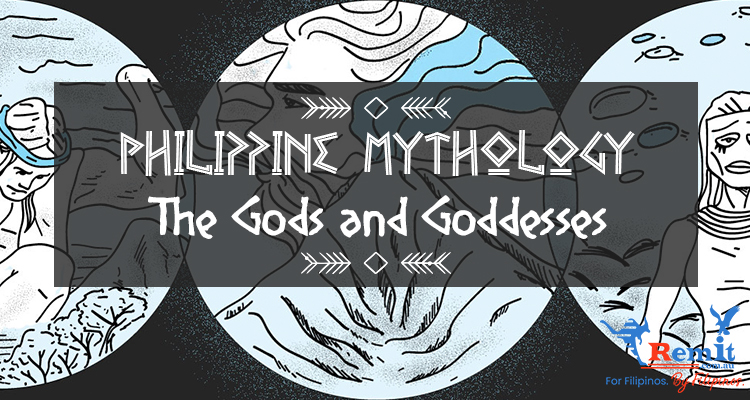 Philippine Mythology – The Gods and Goddesses

The Philippines is blessed with rich traditional beliefs, customs, and tales. In our culture, myths and folklore have been passed through generations by word of mouth.

And today, we still believe that mythical creatures such as Aswang, Diwata, Kapre, gods, and etc. exist.

To start your myth journey, here are the Gods and Goddesses from our very own Philippines mythology: 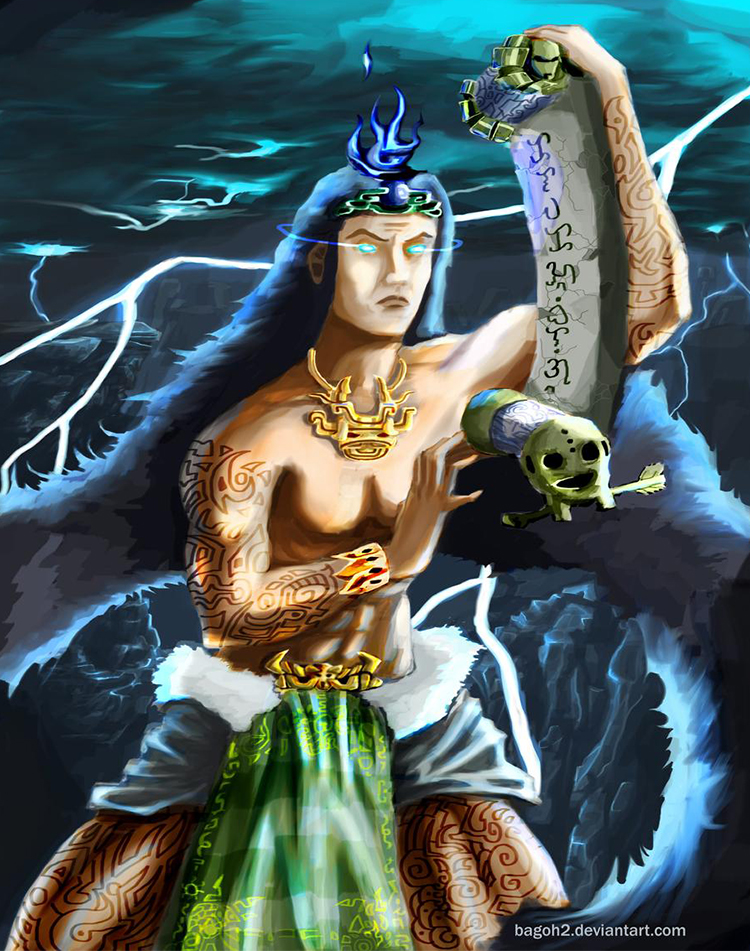 The first one is the most powerful Bathala, or Bathalang Maykapal. Bathala reigns supreme in the heavens, he is the leader of the gods in the Tagalog myths.

But there are counterparts in the other dialects, and you might know him as Captan/Kaptan from the Visayan creation myth. None of the three knew each other, and when Ulilang met with Bathala, a violent duel happened. Bathala won, and Ulilang was killed, giving Bathala control of the heavens. 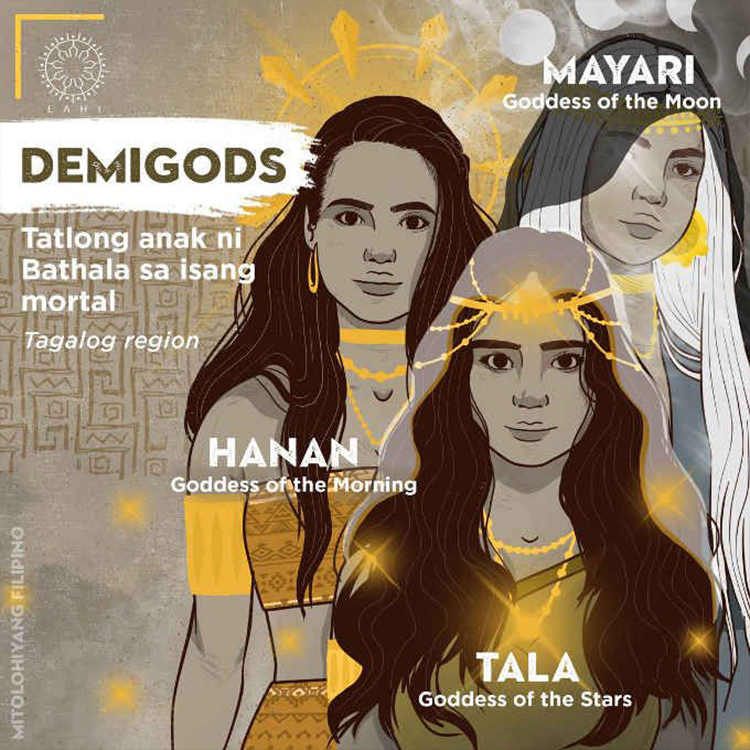 Of course, mythology is incomplete without any demigods. Bathala fell in love with a mortal woman. But unfortunately, she died after giving birth to her three beautiful daughters.

Bathala didn’t want anything bad to happen to his girls so he brought all three of them to the sky to live with him. Tagalog goddess of the sea and protector of fishermen.

Bathala and Aman Sinaya have been fierce rivals for a long time, and every day, they would try to outshine each other. Bathala used his lightning bolts and thunder, and Aman Sinaya used her waves and typhoons.

One day, Aman Sinaya decided to send her tempests into the Sky to cause a commotion. In order to stop her, Bathala threw giant boulders that came from the atop of the mountains. It then created thousands of islands into the surface of the Sea, which became the Philippine archipelago. Known to be one of the assistants of Bathala. Idianale married Dumangan, the god of good harvest, and later gave birth to Dumakulem and Anitun Tabu. In Zambales culture, Dumangan (or Dumagan) is the reason for the rice to “yield better grains.”

Anitun Tabu – Goddess of the Wind and Rain In Zambales, this goddess was known as Aniton Tauo, one of the lesser deities assisting their chief god, Malayari.

According to legend, Aniton Tauo was once considered superior to other Zambales deities. But when she became so full of herself, Malayari reduced her rank as a punishment.

The Zambales people used to offer her the best kind of pinipig or pounded young rice grains during harvest season. Sacrifices that made use of these ingredients are known as mamiarag in their local dialect. One of the lesser divinities assisting Bathala. He was the husband of Ikapati/Lakapati, the fertility goddess, and the father of  Anagolay, the goddess of lost things. One of the most intriguing deities of Philippine mythology, Ikapati (or Lakapati) was the Tagalog goddess of fertility.

Why intriguing? Well, some sources describe Lakapati as an androgynous, hermaphrodite, and even a “transgender” god.

Before planting in a new field, the ancient Tagalogs usually offered sacrifices to Lakapati. In a 17th century report by Franciscan missionary  Father Pedro de San Buenaventura, it was said that a farmer paying homage to this fertility goddess would hold up a child before saying “Lakapati pakanin mo yaring alipin mo; huwag mong gutumin” (Lakapati, feed this thy slave; let him not hunger).

Dumakulem – Guardian of the Mountains Dumakulem was the son of Idianale and Dumangan, and the brother of the wind goddess Anitun Tabu. He is described as a strong and skillful hunter.

This Tagalog sky-god later tied the knot with another major deity, Anagolay, known as the goddess of lost things. The marriage produced two children: Apolaki, the sun god, and Dian Masalanta, the goddess of lovers. 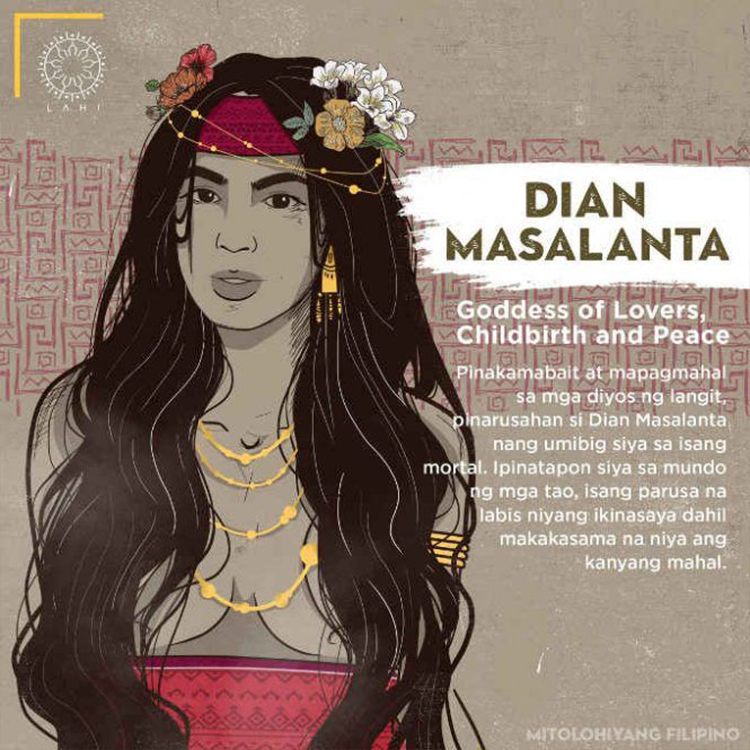 the goddess of love, childbirth, peace, and the protector of lovers among the ancient Tagalogs. Legend says that if you offer sacrifices to Dian Masalanta, she will ensure successful pregnancies.

Apolaki – God of the Sun, Patron of Warriors Apolaki appeared in several ancient myths. He shares almost the same qualities with the Kapampangan sun god of war and death, Aring Sinukuan.

Early people of Pangasinan claimed that Apolaki talked to them. Back when blackened teeth were considered the standard of beauty, some of these natives told a friar that a disappointed Apolaki had scolded them for welcoming “foreigners with white teeth.”

Libulan – God of the Moon, Patron God of Homosexuality

Libulan in myths of Visayas is portrayed as a man, but some believe that the moon is a female aspect of the sun so she is a woman in other myths like the Tagalog folktales.

However, according to one explanation, Libulan is a hermaphrodite or just a crossdresser. During the olden days of ancient Visayans, male babaylans garbed in female fashion were regarded in high esteem by the barangays.

Libulan’s patronage is observed by crossdressing babaylan men of the community, although they do feminine things like cook, sew, clean the house and carry palay and clean them.

The 3 Anito (Tagalog and Pampanga Regions) A male Diwata known for his incomparable beauty. He was originally known as the god of “kapurihan”(purity) and is also the god of food, festivity, and anti-gluttony.

Worshiped mainly by men: they pray to Lakambini to let them find a beautiful maiden to wed.

Lakan Bakod was the “lord of Fences,” a protector of crops powerful enough to keep animals out of farmlands. He was invoked and offered eels when fencing a plot of land.

Among the ancient Kapampangans, Lakan Danum was known as the water god depicted as a serpent-like mermaid (naga).

Before the Spaniards arrived, locals would often throw livestock to the river as a peace offering for Lakandanum. Failure to do so resulted in long periods of drought.

Sitan – God of the Lower World Sitan, is the god of the lower world, a leader of the evil of the ancient hell. He encourages the mortal to commit sin, with the help of his four disciples: Manggagaway, Manisilat, Mangkukulam, and Hukluban. Aring Sinukuan lives in Mount Arayat. According to stories, he was the one who taught the ancient Kapampangan metallurgy, wood cutting/gathering, and rice cultivation.

Apung Malyari – Goddess of the Moon, Ruler of the Eight Rivers 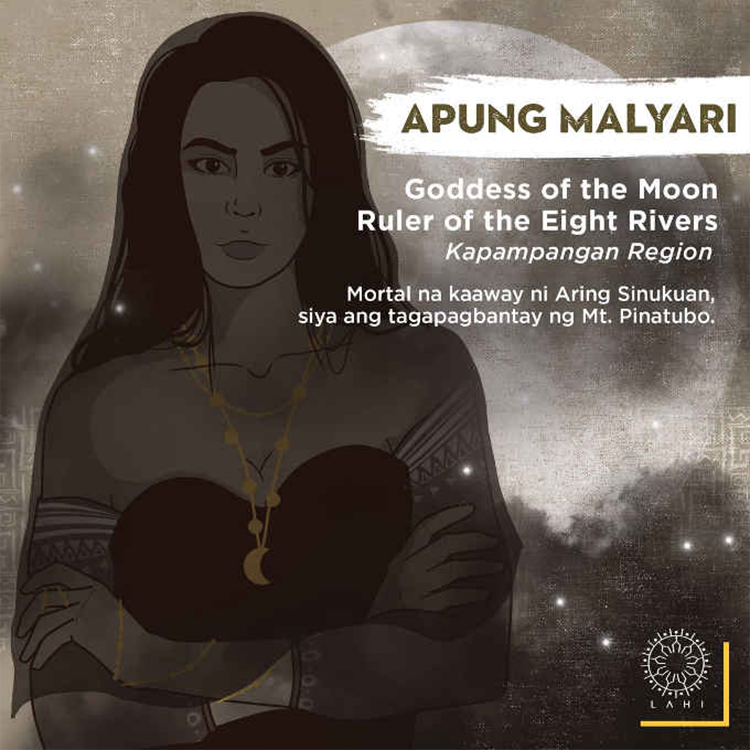 Apung Malyari is a mortal enemy of Aring Sinukuan. In Kapampangan mythology, Apûng Malyari is depicted as the moon goddess who lives in Mt. Pinatubo and ruler of the eight rivers. She was considered as one of the two most powerful deities.

These gods and goddesses are just a few of the many deities in Philippine mythology. And of course, the stories that you’ve read here are just an introduction of who they really are.

Their stories can be confusing but it will all make sense once you dig deeper into our cultural myths and folklore. Hope you enjoyed their stories, it’s now your time to share it!